Prior to the pandemic, British Airways’ provision of the hybrid air-to-ground/S-band satellite European Aviation Network-powered inflight connectivity service proved to be disappointing for your author: speed-limited to the point of near-unusability, and even then with a paltry 50 MB data cap on those slow speeds before slowing to a trickle.

On my first British Airways flight after the pandemic, and with BA’s EAN installation fleet-wide since last January, I was keen to see how the Inmarsat/Deutsche Telekom-provided service had evolved since my last encounter with the EAN in June 2019.

Onboard a fourteen-year-old A320, G-EUUZ, I selected the top package, Browse & stream, which for this Geneva-London flight of just over an hour and a half priced out at £6.99 or just over US$9.

BA’s sales pitch for this package is “browsing the web, keeping up with your email, connecting to social networks and watching online videos”.

But disappointingly, my speeds maxed out — seemingly limited again — at just under 1.5 Mbps over land and under 1 Mbps over the North Sea east of the Thames Estuary, where one wonders whether the system was relying on the S-band satellite element. After providing Inmarsat with a location position, a spokesperson said: “we can confirm that coverage from both the satellite and ground network would be available to support connectivity at the aircraft position highlighted in your screenshot.”

The slower speeds were encountered over water, presumably in the satellite connectivity area. Image: FlightRadar24

These maximum speeds are half a megabit per second faster than where BA’s EAN maxed out when I last used it in 2019, and without the outrageous 50 MB full-speed data cap. But it is still not suitable for streaming video content or video-based social media at an acceptable quality, even on a phone. 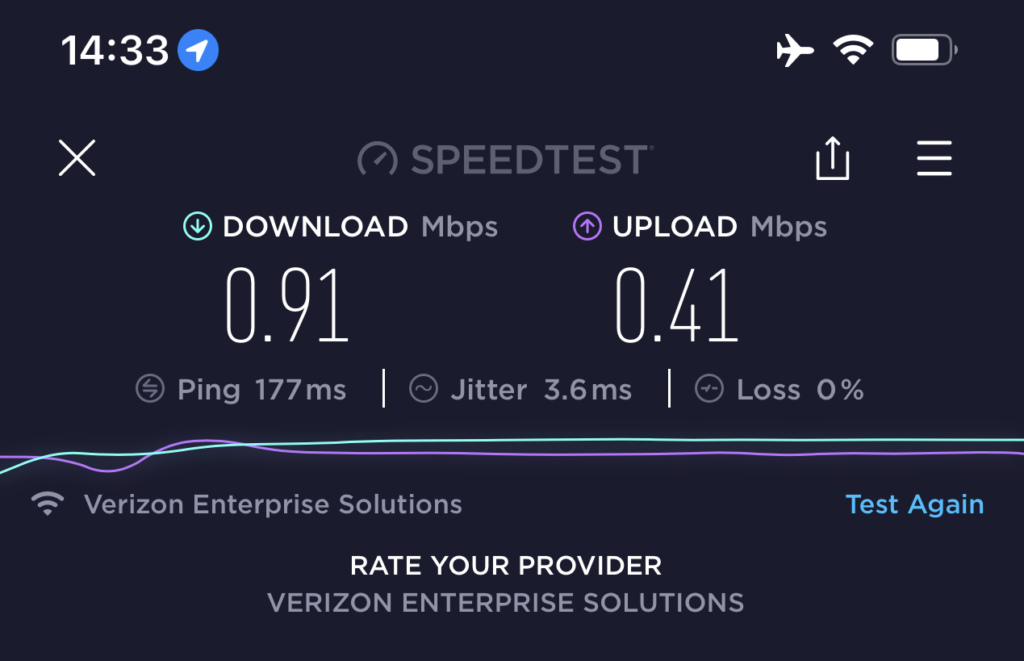 During the brief overwater period, speed was cut by a third. Screenshot: Ookla Speedtest

For these speed tests, I used both Speedtest.net and Netflix’s Fast.com, in the knowledge that there are tactics that ISPs can use to inflate these speeds. The speeds matched my real-world usage experience: very poor.

Your author tested a number of different streaming services, including the BBC iPlayer, Netflix, and YouTube. All were unable to support streams at 1080p or 720p. Buffering was extensive for all services, while those that were able to adjust to the low Internet speed were serving up ultra-low-definition content that was virtually unwatchable even on the small screen of a mobile phone.

Even on a phone screen, the video quality was abominable. Screenshot: BBC

Using video-based social networks was an exercise in frustration. TikTok videos took forever to load and longer videos glitched halfway through, while Instagram Stories were equally slow to load and speeds were clearly not sufficient to allow for background loading of the next video. I’d call both of these unusable.

TikToks loaded too slowly to be worth it. Screenshot: That Midwestern Mom

On a faint positive note, the system didn’t drop out noticeably at any point, and email worked fine. Chatting with friends and family via messaging apps like WhatsApp, Signal and Telegram was, while slow to upload images, not unusably so.

But the bottom line is that British Airways is not selling this EAN service as an email plus messaging service. BA is selling it as a streaming video capable package.

BA’s onboard wifi information page (which appears to date back to before 2019) is still plugging Netflix streaming. But 1.5Mbps simply isn’t enough to stream.

Netflix is clear that to watch 720p content — a debatable minimum on a phone — a 3 Mbps connection is required. 1080p, a much more acceptable minimum, especially on anything with a larger screen like an iPad or laptop, requires 5 Mbps.

The BBC’s iPlayer says that viewers will need more than 1.5 Mbps to view even standard-def programmes.

RGN has asked British Airways, Inmarsat and Deutsche Telekom for comment on whether there is anything about this particular aircraft that is unrepresentative of the EAN service, whether the speeds provided are limited by the airline or the best on offer via the EAN, and whether they consider 1.5 Mbps adequate for a plan advertised as for streaming in 2022.

Only Inmarsat replied, providing a response to the satellite vs air-to-ground position question above, and also saying just that “airline customers using our European Aviation Network (EAN) inflight broadband solution have the flexibility to select bandwidth levels from Inmarsat that are best suited to their individual requirements, with maximum speeds of 100Mpbs [sic] available to the aircraft. Any questions relating to specific packages that an airline offers its passengers, in addition to any speed limits or fair usage policies that might be applied, should be directed to the airline itself.”

British Airways did not respond.

Press Release: Viasat receives CAAC validation of STC for IFC on A320