The Crystal Cabin Award-winning Butterfly seat, developed by Paperclip Design founder James Lee, will finally enter service this year — not on an Airbus, but on an actual bus.

Napaway, a boutique sleeper coach service which aims to compete with airlines by first serving US Mid-Atlantic states, confirms it has selected Butterfly for its coaches.

Runway Girl Network interviewed Napaway CEO Dan Aronov and company head of marketing and branding Samuel Greenberg to learn about their bold plans for improving travel in the US and their choice of these unique airline seats.

Ensuring passenger comfort was key, with Aronov explaining that he wanted to marry the convenience of coach travel with the comfort of a business class suite. “So I started looking around potential options. Can we essentially put this onto a coach? And the answer for most styles [of airline business class seats] was maybe, but probably not.”

The restrictions were not regulatory but rather a matter of space. Coaches are narrower than most airplanes, and most seats available in the airline market would require significant modifications to make them fit. “I was looking at different options and came across the Butterfly seat online and initially reached out to them a few years ago. It can be adopted to fit the space and is a creative and an advantageous way to have the flexibility to use it to provide different kinds of services,” says Aronov.

Each coach will be fitted with 18 flatbed suites but could convert into a 36-seater during the day. That’s because the Butterfly suite features two seats when in the upright position. 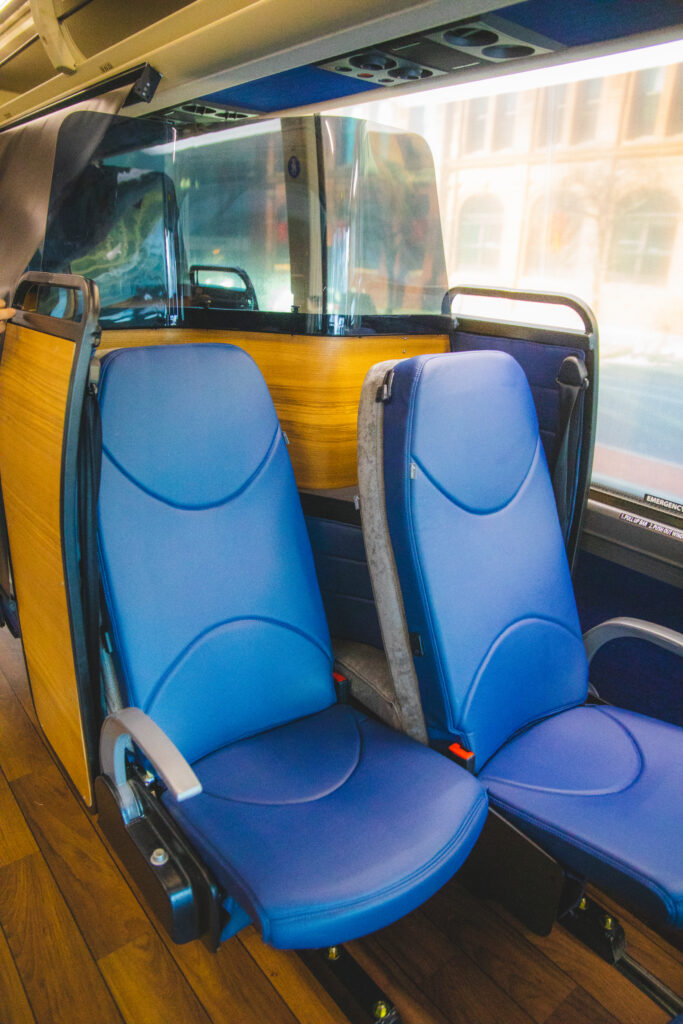 To ensure safety when upright, passengers avail of a three-point seatbelt. The company also added a two-point safety belt across the hips for the bed mode.

For the sleeper service, the seats fold down to create a 6.5ft long, 40″ wide, fully-flat bed. Napaway will provide a half-inch memory foam mattress pad, sheets, blankets, a full-sized pillow, and an amenity kit, including a sleep mask and earplugs. A pull-down screen door ensures privacy in the suite. And high-speed Wi-Fi will be on offer.

The suite features a proprietary fold-out desk, as well as in-seat power outlets, USB ports, cup holders, and storage pockets so passengers can nest to their hearts’ content. 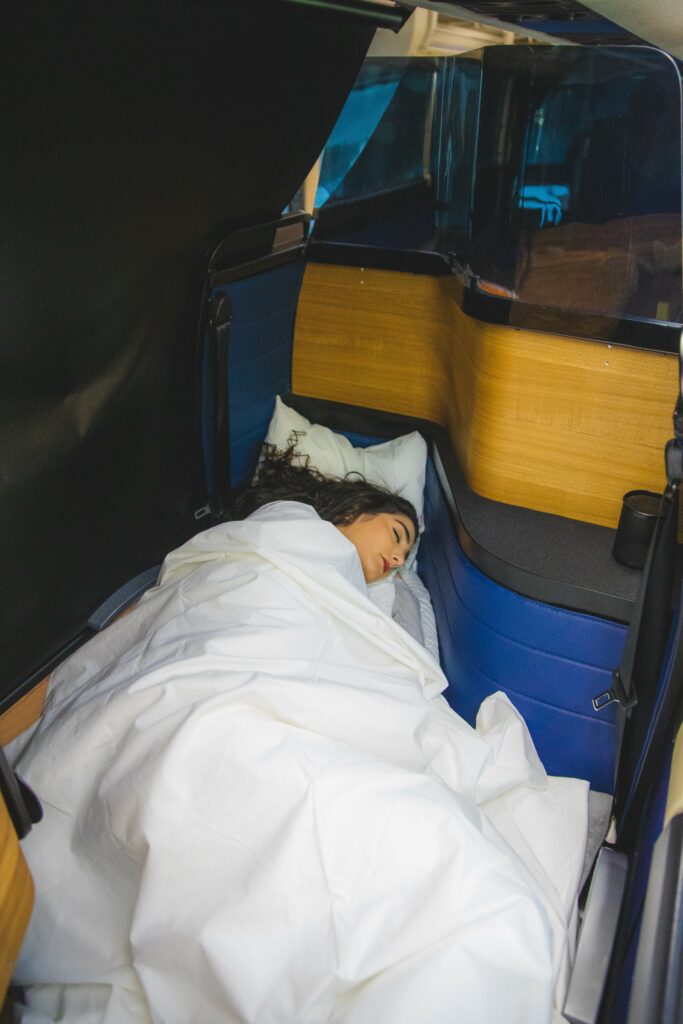 Aronov points to James Lee as “a design and creative spatial genius. Just the way he can work with space and make it do what he wants it to do. It’s pretty incredible.”

We were very closely involved with the development. I will say a lot of thought went into the little things in terms of the design. The tray tables are full-sized tables, you can put a laptop on them, you can eat, drink on them. There are many places to hold phones, and when you’re lying down, there’s a place to put [your device] so you don’t have to hold it. You can watch TV. There are a lot of little details that — if you’ve met James, this wouldn’t surprise you — have been thought through quite a lot. There will be iteration; this is not the final version. There will be improvements over time. There are things that we’d like to make even better, but there are a lot of small things that we’re very proud of.”

Napaway plans to launch in the Mid-Atlantic states this June with service between Washington DC and Nashville. It is targeting underserved city pairs where time, cost, and journey complications can make flying less practical and more uncomfortable than it needs to be. It expects to charge the cost of a standard economy class fare.

“Getting from point A to point B, for most people in the US, is incredibly difficult,” suggests Samuel Greenberg. “You’re either driving a very long distance by yourself, or you’re driving an extremely long distance to get to the airport, just to fly somewhere else. We see Napaway not just as a better way to travel, but also a way that helps [travelers] out. We see our competitors not so much as Greyhound routes, but airlines. That’s the impetus behind launching where we’re launching and building out of the Mid-Atlantic.” Sleeper rail service is so limited in the US that it is not seen as a practical competitor.

James Lee, meanwhile, is thrilled to see his innovative Butterfly seat design finally entering service. “Our first shipset of seats has just finished production and is on its way to North America on a ship right now,” he tells RGN. “This is the first time I’ve sold my seats, so this is a big step.” 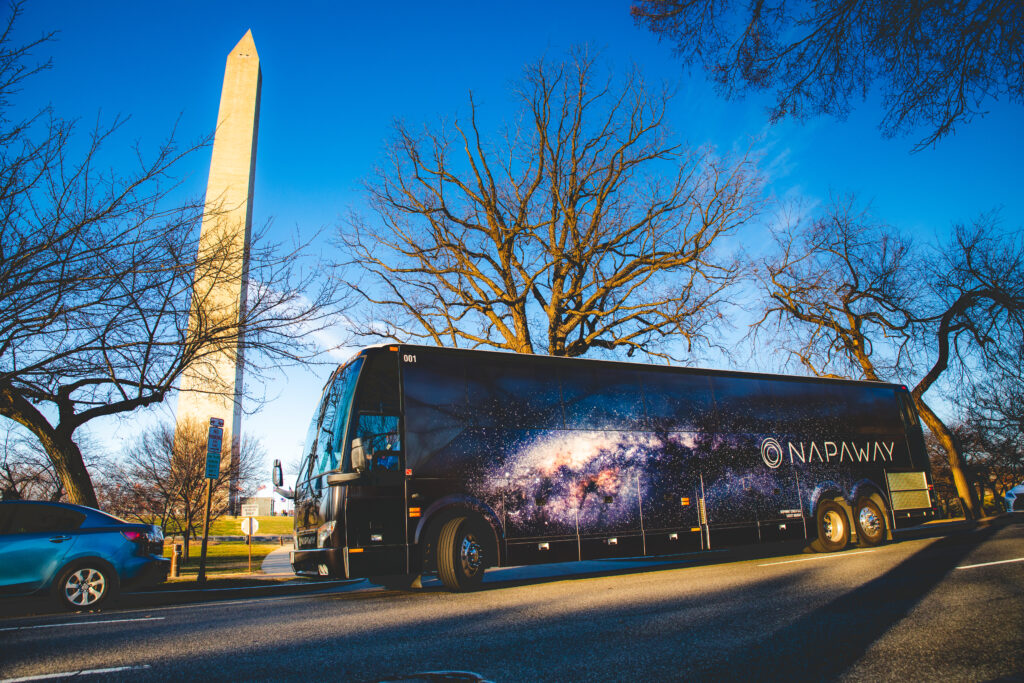 The optimized use of space and dual service option, which makes the Butterfly seat so attractive to Napaway, would also make these suites an excellent choice for an airline flying narrowbody aircraft point-to-point on underserved routes.

Ironically, a seating innovation developed for the skies will benefit ground travel, but Napaway hasn’t been napping. They have identified a clear market need and intend to grow by making the journey pleasant and productive.

All images credited to Napaway