When passengers are in the air for many hours, comfort takes on a whole new meaning. That’s why Bombardier engineered the Global 7500 business jet to maximize passenger well-being, including designing the all-new Nuage seat for the type. Now also available on the Global 5500 and 6500, and the super mid-size Challenger 3500, the Nuage seat boasts simple lines and an ease of operation.

Laurence Casia, who serves as manager, industrial design and cabin innovation at Bombardier, explains the Nuage concept to Runway Girl Network: “While conventional aircraft seats are put together essentially as a collection of boxes, the Nuage seat is more holistic, with seam lines that function in harmony with the entire design, like the door panel line of a car.

“Another example is how the rear surface of the armrest aligns and wraps into the seat’s back shell as a single surface.” 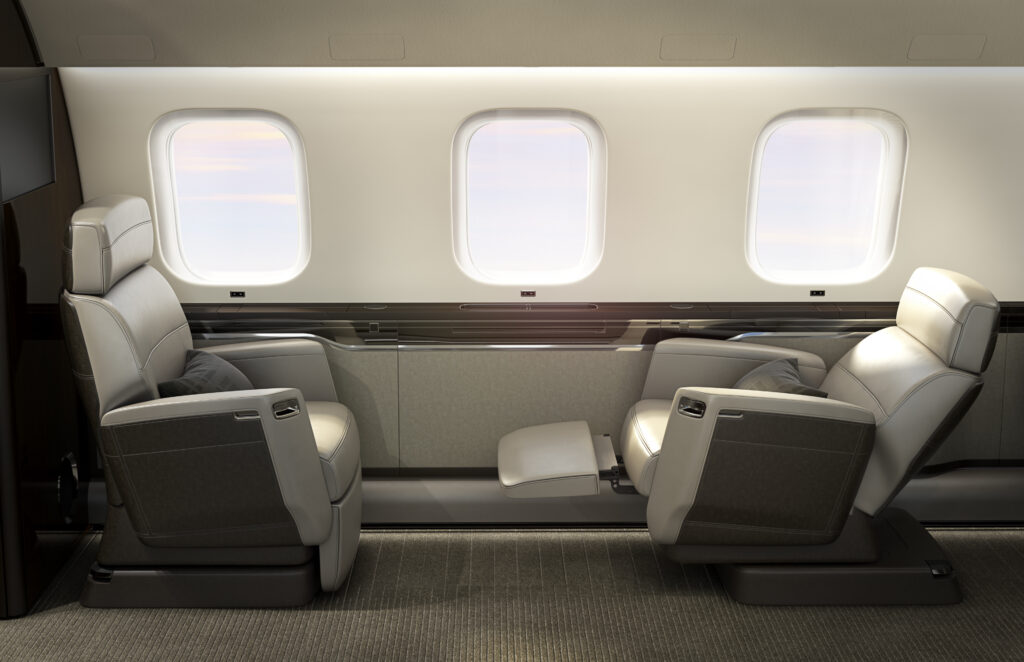 Business jet seats typically swivel, allowing passenger to ‘swing’ into the aisle, creating a communal space for conversation. Swiveling is generally achieved through a latch mechanism that unlocks the seat, before swinging inwards. The maneuver can require a bit of practice to accomplish with style, except in the case of Nuage, thanks to its easy glide.

“That gliding sensation comes from our swivel plate, located to align with the passenger’s center of gravity, and the seat’s unique, trackless floating base, which allows for ease and range of movement without rails,” says Casia. “It is designed to deliver the same intuitive, effortless experience for every passenger.” What he doesn’t mention is that shorter and/or lighter individuals, typically women, especially appreciate the seat’s easy operation.

The Nuage seat also surprises in recline. Usually, only the backrest moves when a seat is reclined, but Bombardier’s so-called tilt-link system pivots the seat backwards at the knees as it reclines. At the same time, the tilting headrest supports the neck, rather than attempting to act as a pillow: the result is sublime.

An all-new concept, the Nuage seat was designed for what Casia calls ‘understated luxury that is easy to use and maintain’. The focus was on creating a truly exceptional place to sit or recline, one that delivered an intuitive, tactile experience without complication.

For that reason, Casia says: “The controls are largely manual, and the design team purposely excluded heating and massage features.” Ease of maintenance was also built in, and the seat remains independent of the cabin management system (CMS). The same is true of the Nuage-branded chaise on the Global 5500 and 6500. 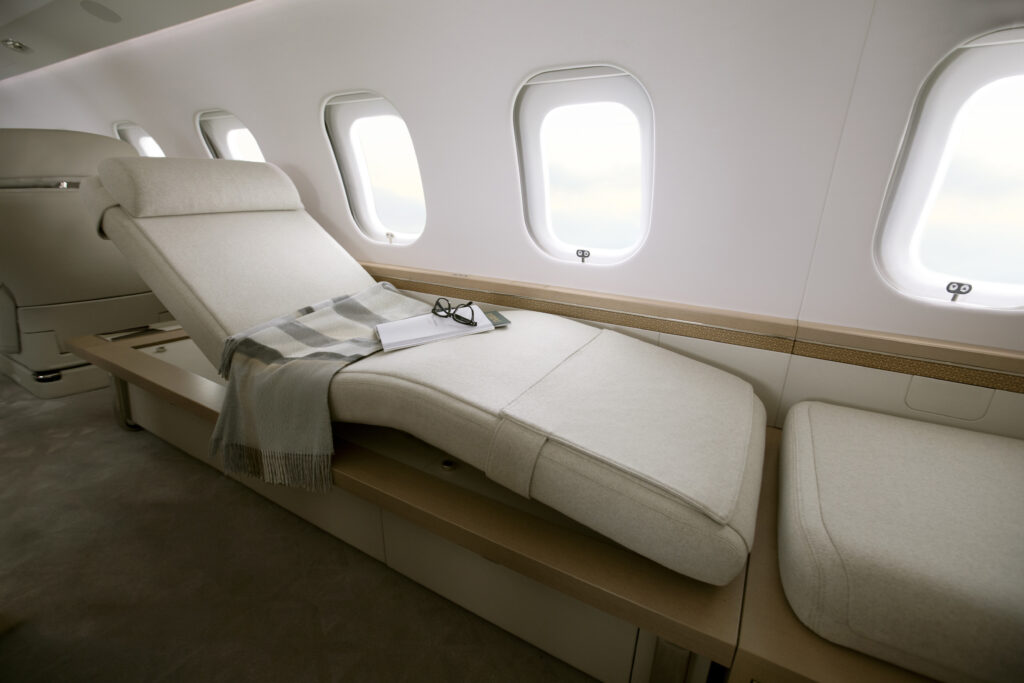 And indeed, the Nuage-branded divan, which is exclusive to the Global 7500, is also independent of the CMS. Both the chaise and the divan boast the same clever recline features and design philosophy as the Nuage seat. 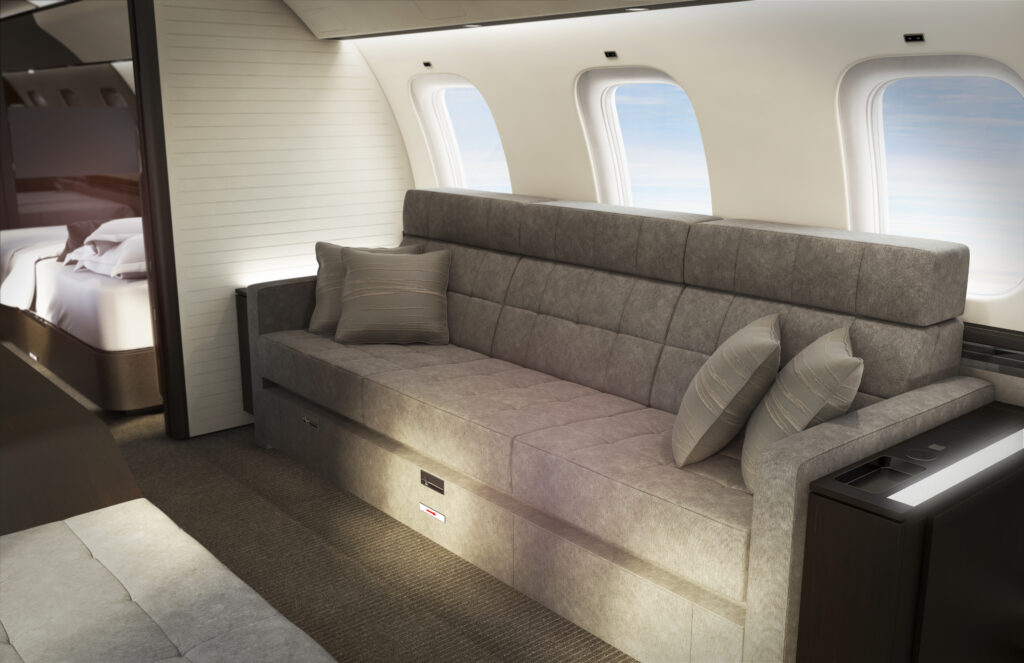 The big Global 7500 as well as the Challenger 3500 are subject to Environmental Product Declarations (EPD), meaning their lifetime environmental impact has been carefully measured.

Everything, including cabin furnishings, is scrutinized under the EPD, as Casia explains: “The Nuage seat is designed for circularity of materials to minimize waste. Its leather, fabric and aluminum are easily upcycled at the end of the aircraft’s life, and the seat is engineered to facilitate disassembly during a possible change of finishing materials or at the end of its life, maximizing the recoverability rate.”

Upcycled wool for the Nuage seats is among a selection of responsibly sourced materials offered for the Challenger 3500 cabin, while the seat itself has been optimized for the smaller airplane.

“It has the same floating base, tilt-link system and pivoting head rest, but with refined proportions better suited to the cabin dimensions,” enthuses Casia of Nuage on the Challenger 3500. 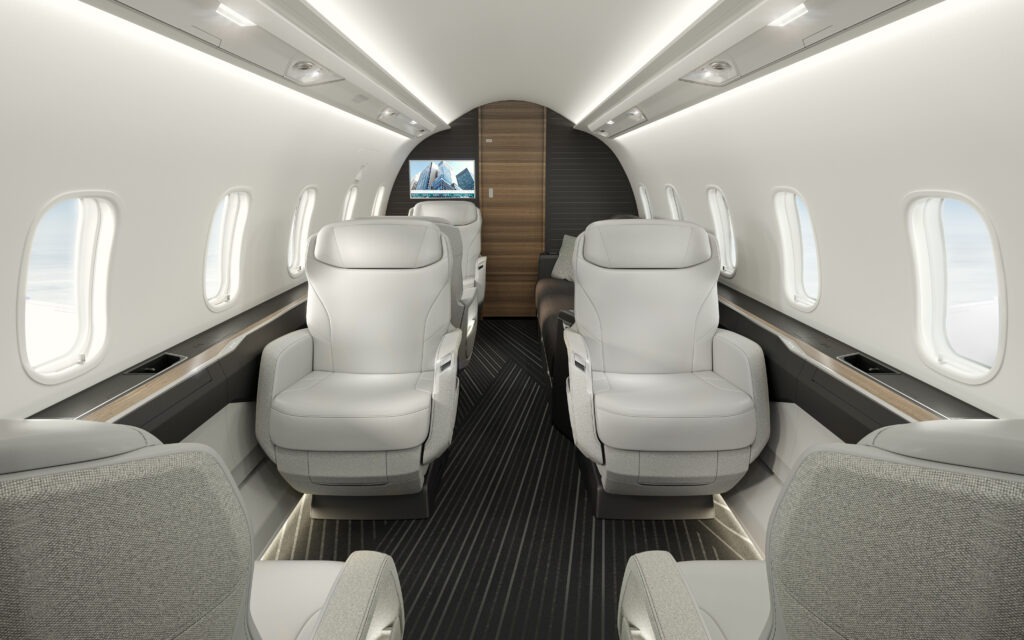 Casia continues: “Our team took special care sculpting the seats to ensure a sense of spaciousness. We also introduced a ‘swept-back leg rest’ feature, creating a space for one’s heels to rest behind the knees, like an office seat, which is especially relevant on a Challenger, where productivity is so important.”