Korean Air, with its extensive experience in manned and unmanned aerial vehicle development, has developed a technology that can inspect aircraft using drone swarms.

Drone aircraft inspection has transformed maintenance norms and is being introduced by airlines around the world. Whereas maintenance specialists previously had to perform a visual check of the aircraft fuselage from heights of up to 20 meters, drone inspections improve workplace safety and allow for increased accuracy and speed.

The airline has developed a drone with a one-meter width and height, weighing 5.5 kg. The aircraft fuselage can be inspected using four of these drones simultaneously. The company has also developed an operations program that allows the four drones to be programmed to take photos of pre-planned areas. If one of the drones fails to operate, the system is configured to automatically complete the mission using the remaining drones. 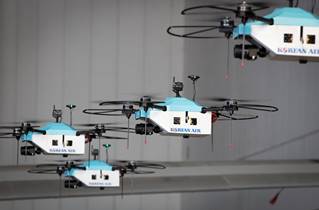 When four drones are operated simultaneously, the usual visual inspection time of about 10 hours can be reduced to about four hours, a 60 percent decrease in time, and this will help to improve on-time flight operations. Moreover, the drones, which are equipped with high-performance cameras, can identify objects up to 1 mm in size, allowing for detection of micro defects that cannot be seen from above with the naked eye.

Korean Air shares inspection data through the cloud, enabling employees to easily check inspection results anywhere and anytime. The airline has also applied a collision avoidance system and geo-fencing to maintain safety distances from surrounding facilities and prevent break-aways from the mission area.

In addition to developing this new technology in line with the government’s policy to strengthen the competitiveness of the aircraft MRO industry, the airline has also revised regulations to improve drone maintenance procedures such as requiring the presence of safety personnel in addition to pilots and engineers. 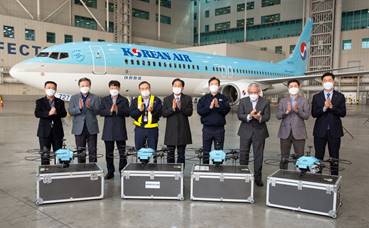 Korean Air will work to improve safety and convenience for workers, stabilize operations and increase accuracy of inspections through continuous trials before officially launching the inspection drones next year.

Korean Air, established in 1969, is one of the world’s top 20 airlines and carried more than 27 million passengers in 2019, pre-COVID. The airline serves 120 cities in 43 countries on five continents; it has a modern fleet of 156 aircraft and employs over 20,000 professional employees. Its global hub is at Incheon International Airport (ICN) and its core businesses are passenger, cargo, aerospace, and aviation maintenance and repair.

Korean Air is a founding member of the SkyTeam airline alliance – 19 member airlines working together across an extensive global network to welcome 676 million customers each year on more than 15,445 daily flights to 1,036 destinations in 170 countries (pre-COVID.)

Korean Air’s joint venture with Delta Air Lines has produced significant expediency and access to hundreds of destinations in the Americas on Delta and 80 points in Asia on Korean Air. Korean Air and Delta co-locate in Incheon’s beautiful Terminal 2, making connections between Asia and America some of the industry’s quickest.

With more than 50 years of serving the world, Korean Air’s vision is to be a respected leader in the world airline community, dedicated to providing Excellence in Flight. Its commitment to airline safety, cleanliness and comfort are renowned.

All images credited to Korean Air