In September, Runway Girl Network published an article analysing the interiors of Lufthansa’s new Airbus A321neo, noting that the airline had eschewed a version of the Airbus Space-Flex lavatories — which convert two mini-lavatories against the back wall of the aircraft into a larger and more accessible lavatory — for standard, less accessible lavatories. Lufthansa confirmed to RGN at the time that “the washrooms are not fully accessible to wheelchair users.”

RGN was thus surprised to receive an email from an Airbus spokesperson insisting that the front lavatory, immediately behind the flight deck door ahead of door 1L, was a “designated PRM lav” — that is that it is designated for use by passengers of reduced mobility.

In the case of this particular A320 family 1L lavatory, Airbus’ assertion was, quite frankly, the first time that RGN had ever heard of this lavatory being designated as accessible.

Airbus provided RGN two images of this lavatory, and insisted that the photo share be on a not-for-publication basis.

To describe the photos of this lavatory, it appears to be a standard modern A320 family 1L lavatory with the addition of a single flip-down seat attached to the aft wall (Airbus calls this a transfer seat) and a single horizontal grab handle to the left of the transfer seat, also on the aft wall.

“Accessibility is provided by means of the tip-up seat which ensures the maneuvering inside the lavatory while the door can be kept closed which ensures privacy,” Airbus spokesperson Martin Fendt wrote to RGN in a statement.

RGN requested from Airbus a concept of operations document or similar guide explaining how it expects disabled passengers to conduct this manoeuvre, but one was not supplied. We are therefore left to imagine a method by which a wheelchair user is expected to physically manoeuvre themselves from the onboard aisle chair, through the open bifold door to the transfer seat, and then to the toilet.

This is certainly not the first time Airbus has employed a tip-up seat solution for PRMs. After first unveiling its Space-Flex v1 configuration for the A320 — which rearranged the footprint of the rear galley by placing the two lavatories together, catering to PRMs with a retractable partition between the two lavs that provides space for an aisle chair — the airframer later revealed Space-Flex v2 to offer enhanced galley space. And, as reported. by RGN in 2014, the v2 version is not nearly as PRM-friendly as the first version.

Airbus explained at the time: “For Space-Flex v2, the swinging partition separating the two v1 lavatories is replaced by a fixed partition featuring a tip-up seat. The wheelchair bound passenger transfers from the wheelchair to the tip-up seat and then, unassisted, to the toilet seat.” 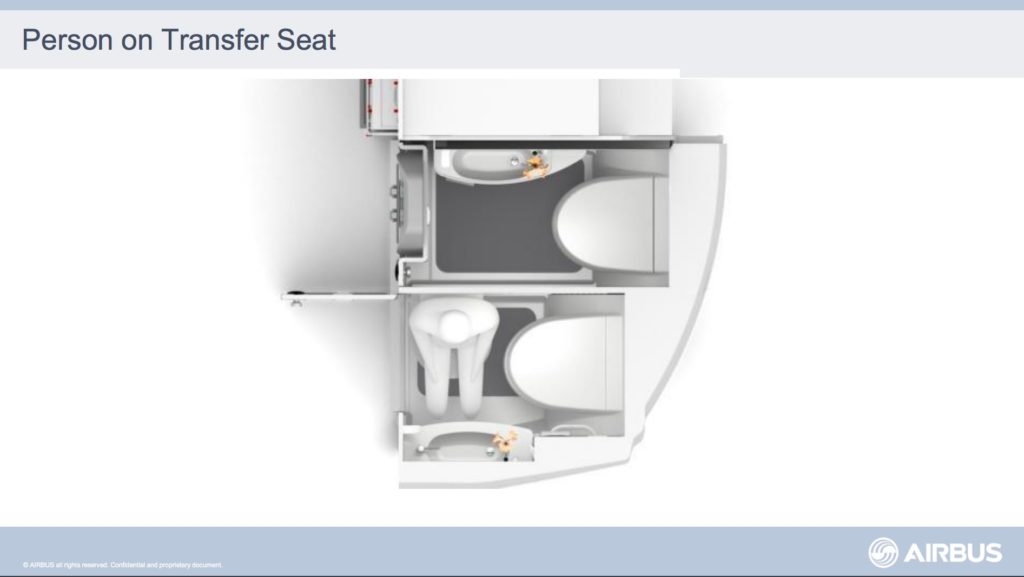 A rendering of the rear Space-Flex v2 lav for PRMs. Image: Airbus presentation, as made publicly available by the US DOT.

There are different but linked questions about the layout of the Space-Flex v2 lavatory with tip-up seat at the rear of some A320 aircraft versus the layout of the 1L forward lavatory with tip-up seat. For instance, is it easier to manoeuvre around the lateral gangway of the former rather than the area near the flight deck? And what privacy is afforded to a wheelchair user navigating to the 1L forward lav’s tip-up seat? Is the passenger expected to transfer from the aisle chair in full view of other passengers?

Both designs seem to require that the wheelchair user has substantial strength and full use of their upper body.

The lavs are certainly at some remove from the kinds of accessible lavatories aboard other forms of long-distance transport — take the UK’s Rail Vehicle Accessibility Regulations 1998, for example, which have in the nearly 25 years since their implementation led to newly built rail vehicles being outfitted with fully accessible lavs, and older vehicles with useful life left in them being retrofitted. All these trains serve journey lengths well below that of a narrowbody aircraft, let alone the new extended-range narrowbodies.

Quite apart from the moral and ethical impetus of ensuring that all passengers have access to a lavatory, the question is presently particularly relevant with the US Department of Transportation’s Notice of Proposed Rulemaking (NPRM) [PDF] on the subject.

“Airbus has designed the Airspace 1L Fwd Lavatory taking into account the current US regulation 14 CFR Part 382 and the proposed amendment of 14 CFR Part 382 for Single Aisle aircraft,” said the airframer in a statement to RGN.

“Furthermore all features recommended in the ICAO Doc 9984 (Manual on Access to Air Transport by Persons with Disabilities) are provided, accessible and usable from the toilet or transfer seat position while having the on-board wheelchair outside the lavatory.”

The 1L Fwd Lav is designed to meet these requirements proposed for future single aisle aircraft:

Airbus summarises the ICAO Doc 9984 that it referenced as follows: “Guidance for accessible washrooms is provided in paragraph 9.2. of the ICAO Doc 9984. The features defined there concerning identification, privacy, doors, toilets, grab bars, sinks, faucets and other controls, accessories, mirrors, and call buttons have been considered for the Airspace 1L Fwd Lav. All the recommended features are provided, accessible and usable from the toilet or transfer seat position while having the on-board wheelchair outside the lavatory.”

Reading the relevant section 9.2 of the document — and, it must be said, this document is a very unambitious definition of accessibility — Airbus’ assertion that ‘all the recommended features are provided’ begs further clarity from the airframer:

During followup emails, Lufthansa’s spokesperson now says “we can confirm that we consider the 1L A320s neo lavatory ‘accessible’, also for wheelchairs. The lavatory is registered as [an] official PRM lavatory.” Noted the spokesperson, “there is no other term we use than PRM lavatory.”

After the innovation of the original Space-Flex v1 lavatories with swinging partition — and the implementation of apparent versions of the design (note the latch on the inboard door above shoulder height onboard a Lufthansa A320neo) — it is disappointing that industry appears to be rowing back on accessibility.

When RGN consulted two well-regarded disabled passenger representatives on the specific matter of the 1L forward lavatory’s accessibility, their responses were scathing. If the 1L lavatory with tip-up seat is the standard to which even the proposed DOT NPRM revision is aiming, it is too low.