Aircraft operators face increasing pressure to lessen their environmental impact by reducing unnecessary fuel consumption. At the same time, a rise in severe weather conditions requires industry to act strategically to ensure pilots have the right weather and real-time updates at their fingertips.

Now the solution is seeing traction in business aviation. Indeed, eWAS Pilot together with SITA’s OptiFlight — a software suite which saves fuel during the climb and cruise phases of a flight — is being offered as a baseline feature on the newly launched Bombardier Challenger 3500 business jet.

“It is the first time eWAS Pilot with OptiFlight is offered as a feature on a business jet, helping pilots reduce fuel burn and carbon emissions,” said SITA in a 15 September statement about the new Challenger 3500 arrangement. The combo has been dubbed the “eco app” by Bombardier.

When customers buy the Challenger 3500, they’ll get the eco app by default. Following this announcement, SITA received a number of requests from other stakeholders that are keen to do the same. “Bombardier has exclusivity with us until May 2022, it was part of the deal. But I can tell you that this announcement triggered a lot of interest from others,” SITA For Aircraft CEO Sébastien Fabre tells Runway Girl Network.

As SITA describes, eWAS Pilot’s 4D weather forecasts and real-time updates from various sources warn about hazards such as thunderstorms, lightning, clear air turbulence, strong winds, icing, and even volcanic ash. Based on this information, pilots can dynamically determine the most economical flight paths that avoid adverse weather.

Fabre tells RGN that pilots can actually load quite a lot of information while at the gate before a flight, provided they’ve got cellular coverage for their EFB. While all features of eWAS Pilot can be used offline, pilots can refresh the data while flying if inflight connectivity is available.

Because a refresh of eWAS Pilot does not require a huge amount of data – it’s roughly 15 megabytes – pilots can use everything from VHF and L-band satellites to broadband Ku- or Ka-band cabin connectivity pipes for an inflight update.

“We have optimized our flow so that it works with all the links,” notes Fabre. That means that a broad spectrum of connected business aircraft can avail of real-time refreshes. 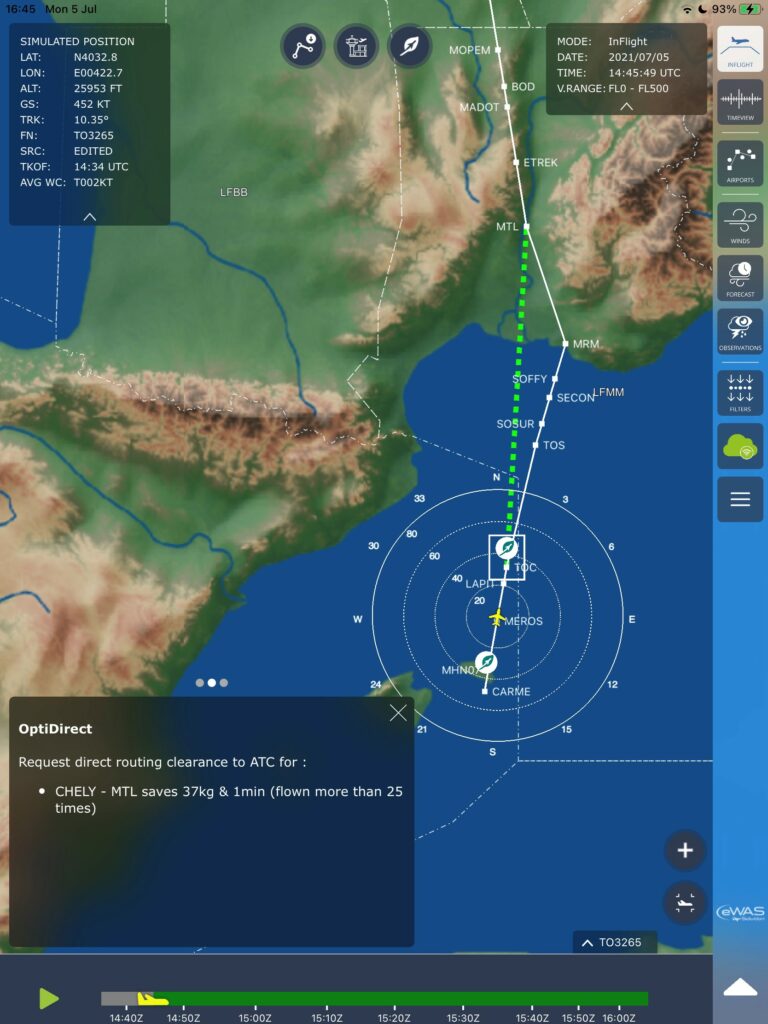 Meanwhile, the software suite OptiFlight, which is fully integrated into the eWAS Pilot application, allows pilots to achieve “significant fuel savings and carbon emission reductions during a flight’s cruise phase”, according to SITA.

Specifically, it provides pilots with the fuel and time impact of speed variations. Its aim is to provide an on-time arrival at the best fuel/time ratio. OptiFlight also recommends shortcuts based on historical flight data and indicates possible fuel and time savings, advising pilots on the best initial flight level and cruise level changes, taking tailwinds and headwinds into account.

So basically the difference between eWAS Pilot and OptiFlight is eWAS recommends the best routes, avoiding headwinds, avoiding turbulences first to save on fuel and second to make the flight more enjoyable for the passengers.

OptiFlight is actually bringing another level of optimization which is taking into account temperature, all your flight plan, and recommending the best speed, the best altitude of flight to get to your destination.

According to SITA, OptiFlight data from airline operations shows that climb fuel savings of 5-6% are possible for each flight without affecting passenger safety or comfort. “The fact that these solutions are now available on a business jet for the very first time shows just how important leveraging technology is to make our skies more environmentally friendly,” adds Fabre.