Airbus and the Montreal, Canada-based SAF+ Consortium have signed a Memorandum of Understanding (MoU) to collaborate with major Canadian aviation industry players on sustainable aviation fuel (SAF) development and production in North America. Airbus will be investing through “in-kind” contributions, which consist of technical and certification expertise, economic analysis, communications and advocacy.

Today’s announcement marks the launch of a new Canadian ecosystem dedicated to stimulating the production of SAF and connecting Airbus with prominent Canadian actors spanning the entire aviation value chain to develop a concrete solution that will make low-carbon flying a reality.

The aviation sector is a global industry and while momentum for SAF is growing, particularly in Europe, investment in SAF’s worldwide development is of equal importance to enable the entire sector to achieve significant CO2 emissions reductions around the globe.

“Airbus, alongside many of its customers, is more than convinced the use of SAF is an essential pillar to support the aviation industry’s decarbonisation journey,” says Steven Le Moing, Airbus New Energy Programme Manager.

“Building this new Canadian ecosystem alongside the SAF+ Consortium is a key milestone as we continue to push to reach our global 2050 CO2 emissions-reduction targets. This partnership is a perfect example of how Airbus is actively shaping decarbonisation discussions in North America, while demonstrating our commitment to making SAF an economically viable solution available to our customers.” 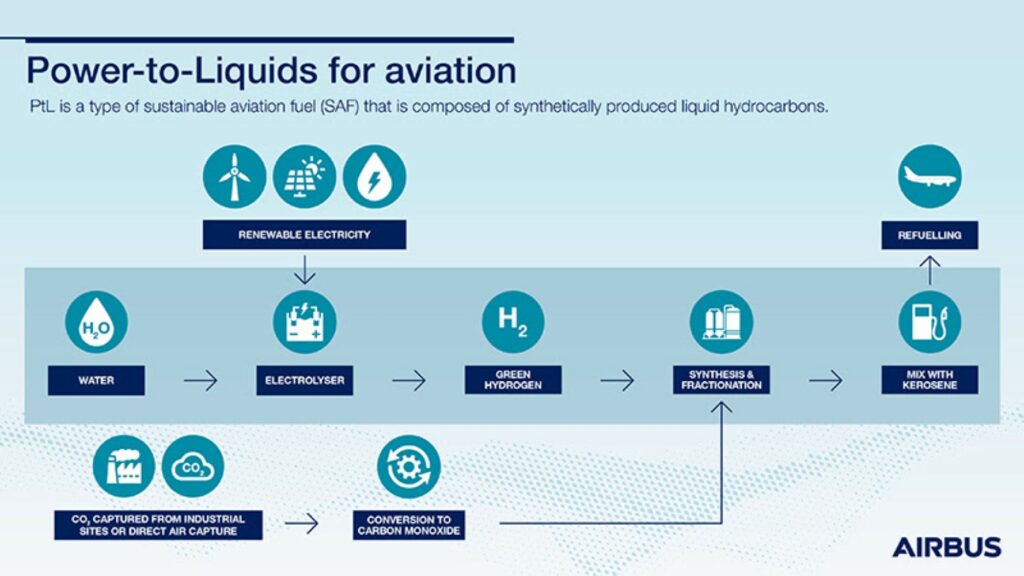 “SAF+ aims to be a pioneer in the field of SAF, and with the support of visionary partners such as Airbus, we will create a competitive company, able to offer one of the many technological solutions needed to decarbonise the aviation industry,” says Jean Paquin, President and CEO of the SAF+ Consortium.

The SAF+ Consortium’s goal is to transform Montreal into a sustainable aviation hub in North America through the construction and subsequent operation of a pilot SAF production plant. Situated close to Montreal, this pilot plant will produce a type of SAF known as Power-to-Liquid (PtL), which is an e-fuel consisting of captured carbon dioxide (CO2) synthesised with renewable (green) hydrogen. The process involves capturing CO2 from large industrial emitters and converting it into an alternative fuel. It is estimated that the fuel  produced by SAF+ will have an 80% lower carbon footprint compared to conventional jet fuel.

The Consortium builds on Air Transat’s commitment to purchase a significant portion of the future SAF produced at the plant for its all-Airbus fleet.

SAF+ intends to produce SAF as early as the second half of 2021 at its first pilot plant. A commercial project of 30 million liters is planned for 2025.

Airbus pioneers sustainable aerospace for a safe and united world. The Company constantly innovates to provide efficient and technologically advanced solutions in aerospace, defence, and connected services. In commercial aircraft, Airbus offers modern and fuel-efficient airliners and associated services. Airbus is also a European leader in defence and security and one of the world’s leading space businesses. In helicopters, Airbus provides the most efficient civil and military rotorcraft solutions and services worldwide.

Airbus has an important footprint in Canada, which is home to the A220 programme. Active in several regions of Canada, Airbus has close to 4,000 employees across the country and more than 23,000 indirect jobs in the aeronautics sector are supported through various collaborations. Airbus works with around 665 suppliers in nine provinces. All Airbus businesses are present in Canada with commercial planes (the A220 programme) in Mirabel, QC, helicopters in Fort Erie, ON and Defence and Space in Ottawa, ON. The wholly owned subsidiaries of Airbus, STELIA Aerospace and NAVBLUE also have installations in the country.

SAF+ is a group of Quebec companies working in the field of sustainable fuel production from carbon capture using green hydrogen produced in Quebec. Aiming at producing sustainable fuel for the aviation sector by 2021, the development of a commercial SAF project by 2025, located in the east end of Montreal, will consist of recovering CO2 emissions from industry and transforming them into a clean synthetic fuel with a carbon footprint 80% smaller than traditional aviation fuel.