Air France, Airbus and Safran have tentatively welcomed plans by the French government to build a large enough national aviation biofuel industry to enable half the country’s fossil-based jet fuel to be replaced with greener alternatives by 2050.

Their support, however, hinges on some form of incentivization, with Air France chief executive Anne Rigail calling for the industrial development to be “supported by incentive mechanisms”.

Earlier this week, France’s government unveiled a roadmap aimed at reducing the reliance of the country’s air transport sector on fossil-based kerosene, as part of a broader national commitment to tackle climate change. The roadmap envisages that biofuels will account for 2% of aviation fuel in France by 2025, rising to 5% in 2030 and 50% in 2050.

Used cooking oil and forestry residues are mooted as being the most viable feedstocks on which to initially base a biofuel production market in France.

The government is now calling for expressions of interest, to help identify second-generation biofuel investment projects that could be instrumental in developing a viable industry in France.

In a joint press release issued at the time of the government’s announcement, Airbus, Air France and Safran, along with energy company Total and French utility firm Suez, described the expressions of interest call as “a fundamental first step towards the emergence of a sustainable aviation fuel industry in France”.

But they stressed that in addition to identifying potential investment projects, the call should also usher in “supportive measures and incentives in favor of such investments”. 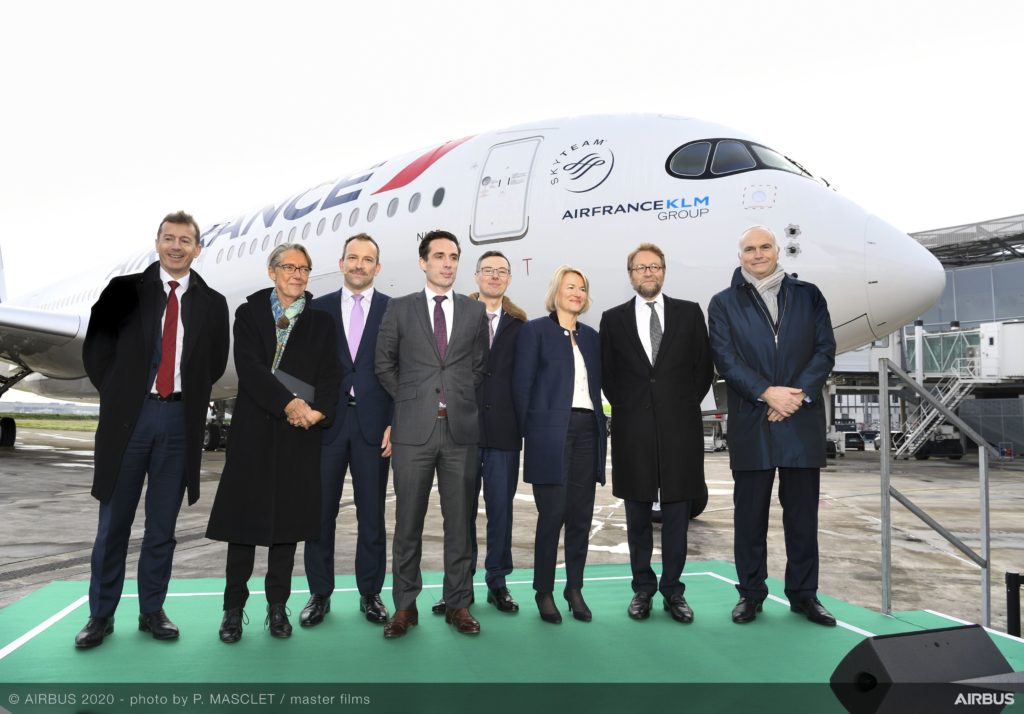 France’s Ministry for Ecological and Inclusive Transition, which encompasses transport, says the development of sustainable aviation biofuel is a government priority, describing such fuels as “a strategic lever for the reduction, in the short and medium term, of net emissions from the sector, which has few energy alternatives”.

The announcement of the roadmap followed conclusions put forward by a working group which included Airbus, Air France and Safran as well as members of the government. One of the recommendations highlighted by the industry stakeholders was that any sustainable aviation fuel industry in France would need to be “economically viable for all actors in the value chain through appropriate incentive schemes”.

This point was driven home by Air France’s Rigail, who told attendees at a press conference that it would be necessary for all stakeholders “to show solidarity in order to participate in the implementation of economically viable, sustainable and lasting solutions”.

Beyond contributing ideas to the working group, it is unclear to what extent, if any, Air France, Airbus and Safran would be involved in an emerging aviation biofuel industry in France.

An Airbus spokesperson says the role of the European airframer was “to contribute to the public-private initiative” and help demonstrate “the feasibility of French supply” for sustainable aviation fuel. The spokesperson adds that the feedstocks used must comply with strict sustainability standards, noting: “The short-term source could be based on used cooking oil and then also expand to forestry and agricultural residues.”

In neighboring Sweden – home of teenage climate-change activist Greta Thunberg – similar action is under consideration. The Swedish government published a report last March which recommends a blending mandate that would require 1% of jet fuel sold in the country to be sustainable aviation fuel from 2021, rising to 5% by 2025 and 30% by 2030.

As it stands, less than 0.6% of the jet fuel used to power the global civil aircraft fleet is sustainable biofuel, highlighting the depth of the challenge that lies ahead.