An award-winning adaptable wheelchair design by Irish designer Ciara Crawford offers a new take on accessible aircraft cabins, and aims to encourage airlines to make it easier for passengers with limited mobility to fly with dignity.

The so-called Row 1 airport wheelchair system would allow passengers to use the same electrified wheelchair to get from the airport check-in desk to the aircraft to their destination, eliminating the need for multiple seat transfers.

This innovative chair can be altered quickly on the aircraft by removing the larger wheels at the back. It is then fitted directly onto the passenger seat.

Smaller cast wheels in the bottom frame allow the chair to be eased into position and used for mobility in-flight.

The design was Crawford’s final year project in college, and was inspired by both her work in the aviation sector and the experience of a family member.

“I was working as a concept developer for an aircraft parts manufacturer, and attended AIX [Aircraft Interiors Expo], and noticed the lack of focus on accessibility in the aircraft industry,” Crawford tells Runway Girl Network. “I have a cousin who is in a wheelchair and doesn’t travel for that reason, so I started looking into it. I knew I couldn’t change what was already there but needed to work with what is already on an aircraft – something that could be added to the aircraft very easily.”

Mindful of the practical requirements, and after reviewing a few models of existing aircraft seats, Crawford set about to design something that would fit onto the front row of most economy class cabins on long-haul aircraft. Crawford believes it would be managed like other aircraft, telling RGN: “It would be going to the airline [as their equipment] and it will be a service they would offer. It would have to be brought back by the airline. They would monitor how many they need and ensure that it’s going where it needs to go.”

To give limited mobility passengers greater control Crawford envisions the chair as being electrically powered, using batteries which are cleared for airline transport in the aircraft cabin. With this feature, limited-mobility passengers would be free to arrive to the gate unattended. A handheld control in one of the armrests would allow passengers to drive their chairs.

Once on board the aircraft, the passenger would need assistance with removing the back wheels. But the caster system on the back of the chair would make it easier for an assistant – either a travel companion or airline staff – to fit the wheelchair onto the seat.

The design earned Crawford recognition as the “2019 Emerging Product Designer of the Year” from the European Product Design Awards; it earned the 2019 Platinum Prize in Transportation, Aircraft/Aerospace.

Paul Priestman, co-founder of London design firm PriestmanGoode, which developed the Air Access integrated wheelchair aircraft seat concept for the 2012 Paralympic games and has been an active advocate for accessibility in air travel for years, tells RGN that he’s gratified to see more designers focus on solving the issues of accessibility.

“What I find encouraging is that a lot of people are coming to the same conclusion as us, that this is a possibility,” he says. While Priestman characterizes the delays in adopting workable solutions as frustrating, he feels generally optimistic. “Things are beginning to change because a lot of people are realizing that this is becoming a rights issue.”

As Priestman points out, other forms of mass transport have become accessible through regulation and airlines face the possibility that regulations will ultimately compel airlines to act. “It will only take one country,” he says, and others will join in drafting laws. “It’s only a matter of time.”

“I think one of the big issues is that the majority of people aren’t aware of the issues because people using the wheelchair are boarded before and deplane after,” he  says. “One of the ways of tackling this is to remind people that everyone at some point will need to have assistance.”

For Crawford, the recognition her design has received has opened up new opportunities to meet people in the airline industry who are equally committed to raising awareness and ensuring progress. “It has been massive,” she says. “I’ve heard from potential users, aircraft manufacturers…the interest has been great.” 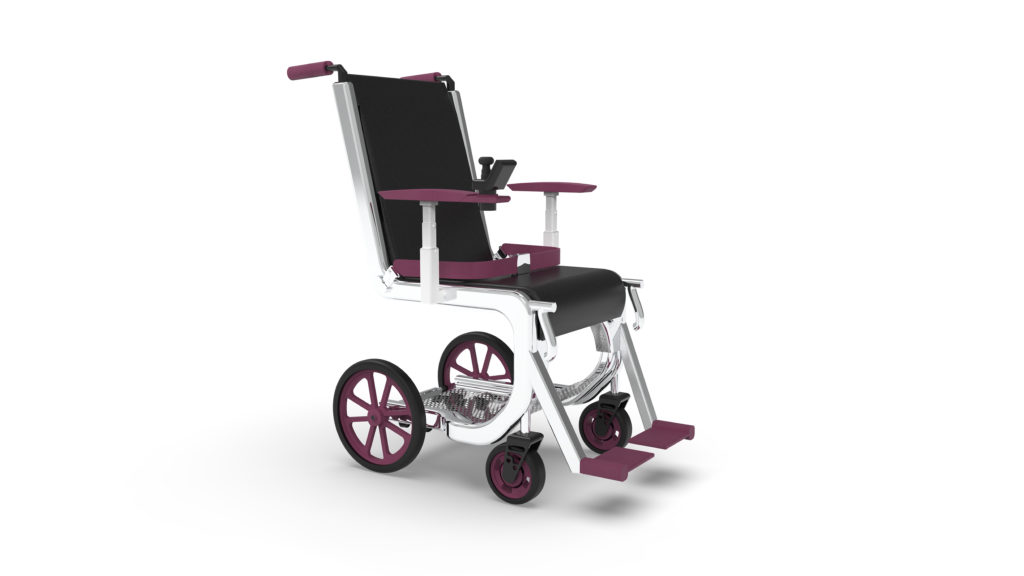