All Nippon Airways (ANA), Japan’s largest and 5-Star airline for seven consecutive years, will be making a series of comprehensive changes to the seats on domestic aircraft as part of its strategy to remain at the forefront of hospitality and passenger comfort for every type of flyer. The renovations will improve economy class seats while also increasing the number of Premium Class seats on domestic flights.

“ANA strives to set the standard for comfort on all our flights, and few things play as big a part in passenger comfort as the seat,” said Hideki Kunugi, Executive Vice President of ANA. “These changes will allow ANA to meet shifts in demand while ensuring unrivaled comfort and convenience for our passengers. We believe in constantly working to improve the travel experience, and these new seats will place ANA head and shoulders above the competition.”

A total of eight Boeing 777-200s and 11 Boeing 787-8s have been selected for the renovations, which are set to begin in fall 2019 and are to be completed by the first half of FY2022. In addition to improvements for both premium and economy class seats, the renovated planes will offer an increased number of Premium Class seats to a total of 28 seats on each aircraft.

In addition to the new seats, passengers will also have access to a rotating table and a retractable side table as well as a privacy partition between seats. All seats also come equipped with a PC adapter and USB power outlet.

The seats in economy class are produced by Toyota Boshoku, the top automotive seat designers in Japan. ANA worked closely with Toyota Boshoku to ensure maximum ergonomic seating comfort, access to technology and safety for all passengers.

Designers considered a full range of body types and postures to find the ideal balance for the seat as well as to determine monitor positioning. The comfortable tailored seat distributes pressure evenly throughout the body to make sitting more comfortable. In addition, the backrest frame shape has been optimized to make it perfectly fit a range of body types. These same seats and accompanying features have already been installed in six ANA B767-300 aircraft and have received overwhelmingly positive feedback. Bonus features include an 11.6-inch touch panel personal seat monitor, the largest yet for ANA’s domestic Economy Class, and an ergonomic beverage holder. 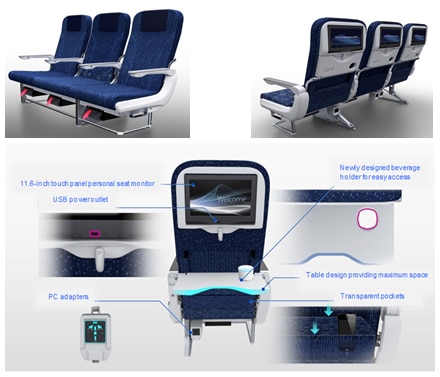 These new seats represent ANA’s commitment to advancing comfort, service and hospitality on international and domestic flights alike. The company will continue searching for ways to raise the bar in order to remain a global standard bearer and premier air travel provider.

ANA was founded in 1952 with two helicopters and has become the largest airline in Japan, as well as one of the most significant airlines in Asia, operating 80 international routes and 118 domestic routes. ANA offers a unique dual hub model which enables passengers to travel to Tokyo and connect through the two airports in the metropolitan Tokyo, NARITA and HANEDA, to various destinations throughout Japan, and also offers same day connections between various North American, Asian and Chinese cities.

Besides the full service and award winner carrier ANA, the ANA Group has two LCCs as consolidated subsidiaries, Vanilla Air Inc. and Peach Aviation Limited. The ANA Group carried 53.8 million passengers in FY2017, has approximately 39,000 employees and a fleet of 260 aircraft. ANA is a proud launch customer and the biggest operator of the Boeing 787 Dreamliner.

Doctor Suzanne Kearns on why training for safety requires a rethink