Alisdair Stewart, chairman of the new Aero Space Scientific Educational Trust (ASSET), has a vision. The former banker and keen sport pilot leads the charitable concern as it strives to bring a world-class aerospace centre to the heart of Scotland.

Under the scheme, ASSET subsidiary Aero Space Kinross (ASK) plans to construct a major facility, including a 150-seat planetarium and Challenger Centre with the aim of inspiring young people to consider aviation careers.

The idea blossomed after Stewart moved to the Kinross area 16 years ago. He became chairman of the Kinross-shire Partnership, which works to drive economic development. “We were looking for a long-term project that would create jobs and stimulate the local economy through tourism. We’re at the side of a major motorway between Edinburgh and Perth, but people were traveling by on their way between them,” Stewart explains to Runway Girl Network.

“I came up with the idea of creating a centre of excellence for light sport aviation (LSA). This is a beautiful part of the world and we have unrestricted airspace, so the area had already become a magnet for LSA enthusiasts. I called it ‘Aero’ because it was to be an ‘aero-centre’, and ‘Space’ because we were going to create the space, for businesses, universities, schools and others to come into, while featuring hands-on exhibits, experiments and other activities. But people quickly latched onto the word ‘Space’ and space exploration became as important a theme as sport aviation. The aim is to educate, through informal learning, and entertain; we reckon we can get 100,000 visitors per year.”

A major aspect of the ambitious plan is to incorporate a Challenger Centre. “These [centres] were established as a legacy for the astronauts who perished in the 1986 Challenger Space Shuttle disaster, especially since one of them was a school teacher. There are 41 across the US, plus one in Canada, one in South Korea and another at the UK’s National Space Centre, in Leicester,” says Stewart.

“The folk in Leicester have been very good, helping us understand and articulate what’s required to establish our own centre. We envisage ASK occupying 50,000 to 60,000 sq ft, of which the Challenger Centre will consume 10,000 sq ft. It provides a problem-solving, educational half-day interactive team experience for around 30 children at a time; they won’t realize how much they’re learning while they’re having fun.”

“We have seasoned pilots who’ve been the primary builders, with help from the students as they grasp the principles of assembly, design and flight,” says Stewart, noting that the group is using a fast-assembly EuroFOX kit for the build.

“We expect to test fly during the first fortnight in August. Then a group of volunteer pilots, myself included, will take the students up for what might be their first ever flight, in an aircraft they helped build.”

Recognizing the lack of women in the industry, Stewart adds: “There are some girls involved and it’s very much our hope that we’ll inspire lots of females into aerospace. It’s an industry that covers so much and we want to introduce them to the possibilities through STEM-focused activity.”

Money for the Build-A-Plane project has come through a European grant, a crowd-funding effort, and the pockets of four local pilots, including Stewart. Materials science company W. L. Gore & Associates, which is growing its footprint in aviation, has sponsored a trailer for the finished machine.

“Gore in the UK has some strong links with Kinross High School with several associates’ children currently attending the school along with associates Adrian Milne and Keith Cuthbert whom are in fact both former pupils of the school,” says Gore application engineer Keith Cuthbert, who is part of the team involved in supporting the effort.

“This seemed like a fantastic project to support, to get children of school years involved in an aerospace project of which we had never seen for this age group,” he says. 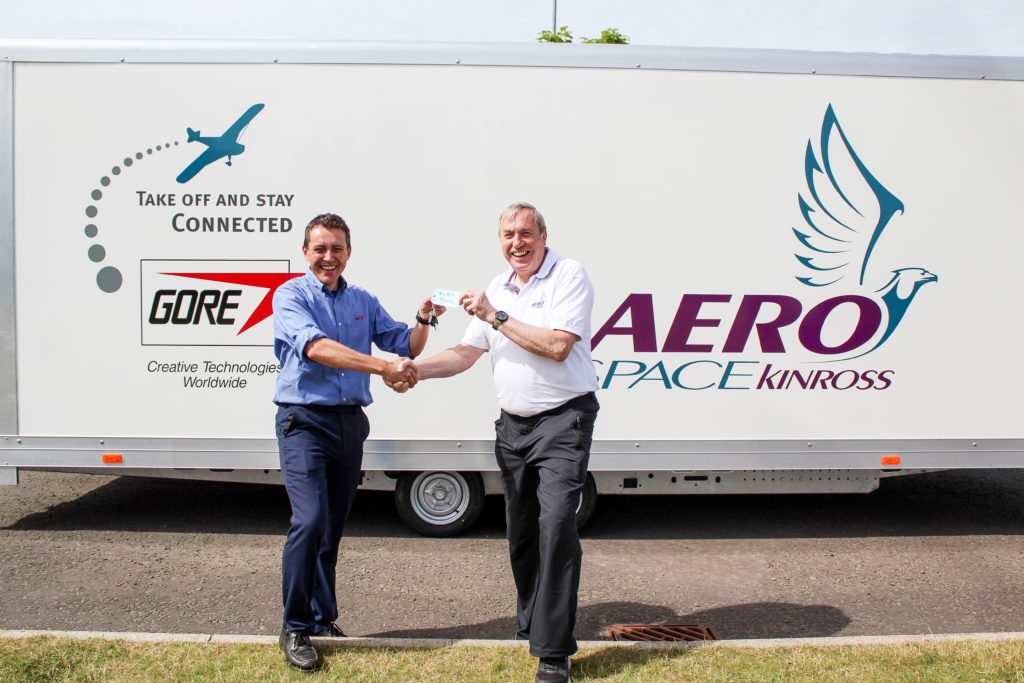 ASSET’s next challenge is to construct the ASK venue. Stewart reckons it will open in the 2020-21 timescale, while the fundraising effort is reaching out through the American-Scottish Foundation to the US.

“We’re looking to ex-pats and the diaspora to dip into their pockets and help us become a signpost for the future, setting young boys and girls off on aerospace careers,” he says.

Silence is terrifyingly golden in A Quiet Place