When it comes to technology and innovation, United Airlines EVP of Technology and Chief Digital Officer Linda Jojo says flexibility and a forward-thinking approach to innovation are key.

She recently attended the Kara Swisher-run Code Conference in Rancho Palos Verdes, and “the CEO from Uber was there, Spotify was there, and these are some big innovations. I mean, Uber completely changed the way we think about personal transportation and that’s a big swing, right? That’s a home run. But you win baseball games by hitting singles too,” Jojo told Runway Girl Network during an interview in Los Angeles.

“So, if you can think about a big innovation, great, but what we do at United is think about what are the small things we can do and one of the small things we did recently was be the first airline on Amazon Alexa and Google Home. And that is really about, how do we use voice and how do you actually interact with an airline using voice? It’s not a big game changer right now, but, if people start to think about using voice more than text, we’ve now done it in two weeks.”

Embracing a version of Silicon Valley’s popular “Fail Fast, Fail Often” mantra, Jojo says the ability to remove ego from the equation, realistically assess when things aren’t panning out, and pivot in another direction is also hugely important.

“If you’ve spent two years dreaming it up and thinking about it, it’s really kind of hard to decide not to do it,” explains Jojo. “But if you’ve been working on it for two weeks and it doesn’t really work, you stop. If it doesn’t work, don’t stick with it. And that’s another thing we’re trying to do is, how do you create an environment where it’s safe to do that? Where it’s okay. And I’ll be honest with you, our leaders are all using that lexicon on all kinds of things, you know? If it doesn’t work, we’ll change it and there’s no shame in that.”

One example of this new approach are the big changes in store for users of United’s app, which Jojo says is undergoing a major overhaul this summer.

“So, we’re gonna do simple things like pivot it so it works like the best app on your phone. That’s what we want it to be, as intuitive as that. I think some of the [other] things you’re going to see coming are gonna make the day of travel much easier. A lot less clicking around, being smarter about knowing where you are on the journey, and if you’re on the plane we’ll bring the entertainment screen right up instead of having to click around and do those kinds of things.”

Also important, particularly from a #PaxEx perspective, will be the app’s ability to communicate information more openly with passengers on every leg of their journey.

If you’re flying out of Chicago or Houston and for some reason we have a long delay instead of that dreaded ‘operational difficulties’ message that you would normally get, we’re gonna start telling stories. What is going on with this flight? It was delayed coming out of Newark because of air traffic control or, I know it looks sunny here, but the plane is coming from a place where there are thunderstorms and it was delayed.

We want to be more transparent so people can know what’s going on with their flight. If you think about the whole ‘where is my airplane now’ concept, it’s the same idea. What is going on with my flight?

And in an era when many passengers are also wondering what is going on with my seatback IFE, Jojo says the future of embedded IFE is the subject of much discussion at United.

“We talk about that a lot actually,” says Jojo. “I was a consumer, not an employee, of airlines when they started pulling IFE out of the seatback, and I think it might have been a little bit early. Because, you know, at the time my mother didn’t have a tablet. She has one now, but I think to expect people to bring their own tablet was a little bit tough at first. I do think people are getting used to it [but] we’re actively debating that right now. You know, is [embedded IFE] something that’s a good customer-friendly thing to offer? We’re looking at that.”

Another thing Jojo has been thinking a lot about lately is inflight connectivity, which, she freely admits, has been a bit of a challenge.

“Onboard wifi is a pretty interesting thing,” says Jojo. “When you think about people’s expectations – I’m not complaining about expectations, but I’d like to explain it – which is, the performance of wifi when you’re at 35,000 feet going 500 miles per hour over a mountain range or an ocean is not going to be the same as in your living room like, ever.”

There’s also the question of how United can ensure service across its fleet when partnered, as they currently are, with three different connectivity providers.

We were one of the first to have satellite based wifi from Panasonic and it’s still one of the best that works internationally but when Continental came along they had Thales, and then we use Gogo for our transcontinental, so, yes, we have three providers and those contracts all have different lives. You also have to touch the airplane to change it, so, we felt that the best thing to do was to shield the complexity with a portal … I think we’re the only large airline that actually has our own portal … it also gives us the ability to control the look and feel of things, the usability, we have much better logging because we can manage what’s happening between the providers. So, it helps us from a trouble-shooting perspective too. But it’s hard, wifi’s a hard problem.

And with even the most tech-agnostic travelers among us becoming increasingly tech-savvy, Jojo says United’s goal right now isn’t so much about getting passengers up to speed technologically, but rather figuring out how best to serve them via the technology they already use.

“I think for us, our philosophy really is that we don’t want to dictate technology to our customers, but for the technology that our customers want to use and the way they want to interact with us, we want to be there. And so, we’ll run on any device you’ve got … whether that means [making] the app more and more feature-rich so you can do as many things on the app as you can do on the website or call center – which doesn’t mean that call centers go away either, because I think there will always be a segment of people that want to talk to a live person – or even on Amazon Alexa and Google Home … we want to be where you want to do it,” says Jojo.

“Everyone’s got their own kind of views of what’s the best technology, we don’t have a view. We’ll go where you are.” 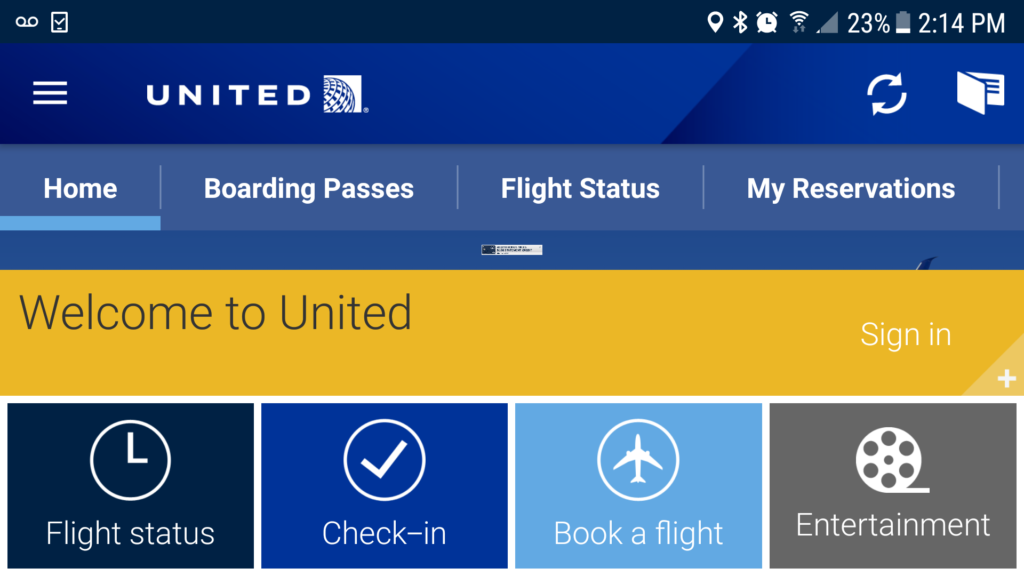 United Airlines will revamp its app this summer.