At the dawn of commercial aviation, passengers enjoyed an intimate view of the world over which they travelled, as airliners seldom climbed to more than a few thousand feet in altitude. Later, as aircraft became more efficient, they flew higher and that intimate connection diminished. Now, through the medium of the inflight map, Rockwell Collins is among the firms working to bring the magic back.

Clint Pine, principal manager of program management at Rockwell Collins, reckons the moving map remains the second most popular inflight entertainment (IFE) option after movies. Responsible for the common Airshow moving map software – including Rockwell Collins’ latest version, the ASXi 4 – plus wireless cabin products and IFE content services, Pine says: “We’ve been doing maps for more than 30 years, so we have a wealth of experience. I believe many people don’t realize the importance of maps in carrying airline branding and promotions, and advertising, particularly for some of our airline customers in the Middle East.”

Promotions and route/service updates are typically inserted on a monthly basis, while new software enables specific zones on the aircraft to be targeted with tailored material. “The airline configures the map depending on destination, triggering promotions to display at specific points in the flight. Airshow reads the take-off and destination points from the flight management system (FMS), then automatically displays information for the route. It shows different information on the ground, in cruising flight and on descent. Because it’s smart, Airshow knows if there’s a delay and won’t display ‘Welcome to Destination’ if the aircraft’s holding to land, it’ll wait until it’s actually landing,” explains Pine. 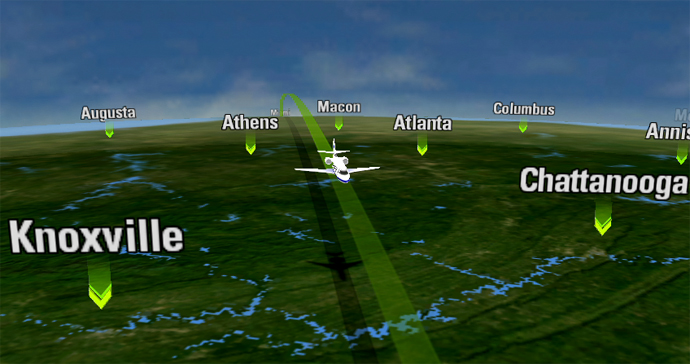 Meanwhile, strong demand in the business jet market for personal electronic device integration has seen Rockwell Collins develop a robust, powerful map for tablets and smartphones. “We’ve included augmented reality features in our iOS and Android maps that enable users to take their device and pan it around the aircraft, ‘seeing through’ the cabin walls to what they’re flying over,” says Pine.

“It opens the possibility for delivering information on points of interest on the ground that they normally wouldn’t even see. Basic information includes a high-resolution photo and a caption. It’s good for cities – we have around 1,000 such points in our database – but we’ve found people want to know more.”

He reveals that Rockwell Collins is in “the early stages” of potentially partnering with a university that generates geological information, as it wants to be able to show people what’s between the major points of interest. In essence, Rockwell Collins wants to tell passengers about the lake below them or describe the dinosaur fossils discovered in the rocks they’re flying over. “We want to fill out the map so that it gives a complete picture.”

In this regard, the company does face competition in the commercial airline space. Last year, FlightPath3D revealed its new 3D birds-eye map, combined with points of interest and slick monetization possibilities for operators. The firm, which boasts a growing list of airline customers, showcased its latest developments at the recent Aircraft Interiors Expo in Hamburg.

For its part, Rockwell Collins believes geo-entertainment map software is likely to find its largest market with the airlines, but Pine does not believe it will be a major ancillary revenue earner. Even so, he says Rockwell Collins is determined to produce the very best maps possible. “We think we’re about 12 months away from implementing the geological idea; taking its location from the aircraft FMS, it’ll provide the most accurate data possible. We’ll probably have a button that switches the geology off too, so that it’s not distracting to users that don’t want it.”

Rockwell Collins is looking at the big picture for information, but what of the display itself? There’s little point describing a river 40,000ft below if it’s just a pixelated line on the map. “Today’s map sets deliver data at 30m per pixel. But we just purchased a new map set from a leading satellite provider that’ll go down to 10m per pixel. It’ll start to mimic the quality you see with the satellite imagery on Google Maps, but in the air, via the aircraft server,” says Pine.

“It means soon you’ll have really high-resolution map imagery, overlain with all the usual points of interest, plus data on the geology and landscape below.” 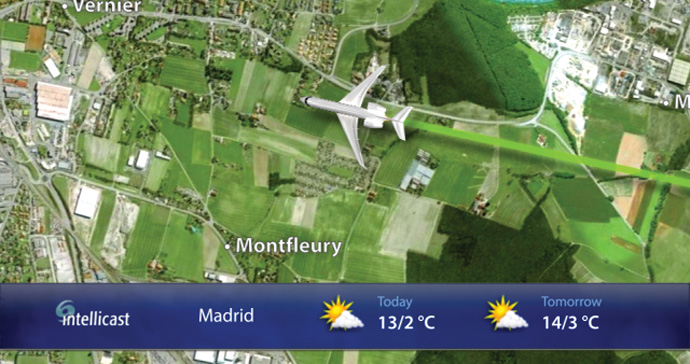 RGN Premium: French partner doesn’t back down after all