When I choose to buy premium economy over a regular coach class seat, it is all about the space. As airlines continue to put the squeeze on passengers down back, securing just a little bit of extra shoulder or knee room can make a big difference.

In the first half of 2017 I had the opportunity to fly British Airways World Traveller Plus premium economy more often than I expected. Indeed, I experienced the product on every aircraft type that features it. When it comes to the core goal – providing additional space – British Airways delivers just fine. But the soft product leaves something to be desired.

The seat itself is nearly identical across the fleet. The wider space and extra pitch are great and the increased recline is nice for a snooze on board.

The headrest is large and supportive, but it is largely fixed, and not really adjustable; you win some, you lose some. Power is readily accessible and the entertainment screen is a nice upgrade over the regular economy class monitor, though a quirky interface and limited content selection could be easily improved upon.

The IFE system also contributes to legroom availability, or rather the lack thereof; it takes up a decent chunk of the under-seat space and limits one’s ability to store a bag below. I’m also not a fan of the footrest, though I understand that I might be simply too tall to fit the target demographic for this feature. 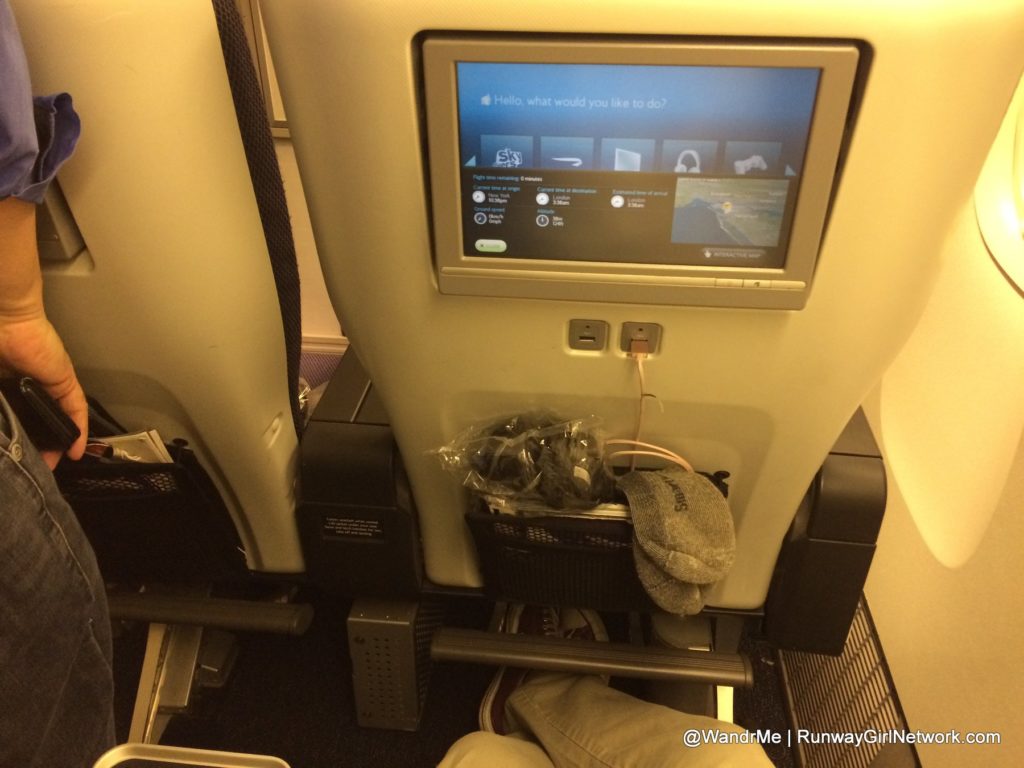 I enjoyed decent screen and power options in the BA World Traveller Plus seat.

So, the hard product is a solid play, ticking all the right boxes and making sure I’m moderately comfortable on my trips between the US and London. But soft product is what lets an airline move between functional and fabulous. Alas, this is where British Airways has a few problems.

Passengers in the World Traveller Plus cabin receive a glass of sparkling wine prior to departure. That’s a nice celebratory touch to kick things off. The champers is also probably the highlight of the service offered during the flight. 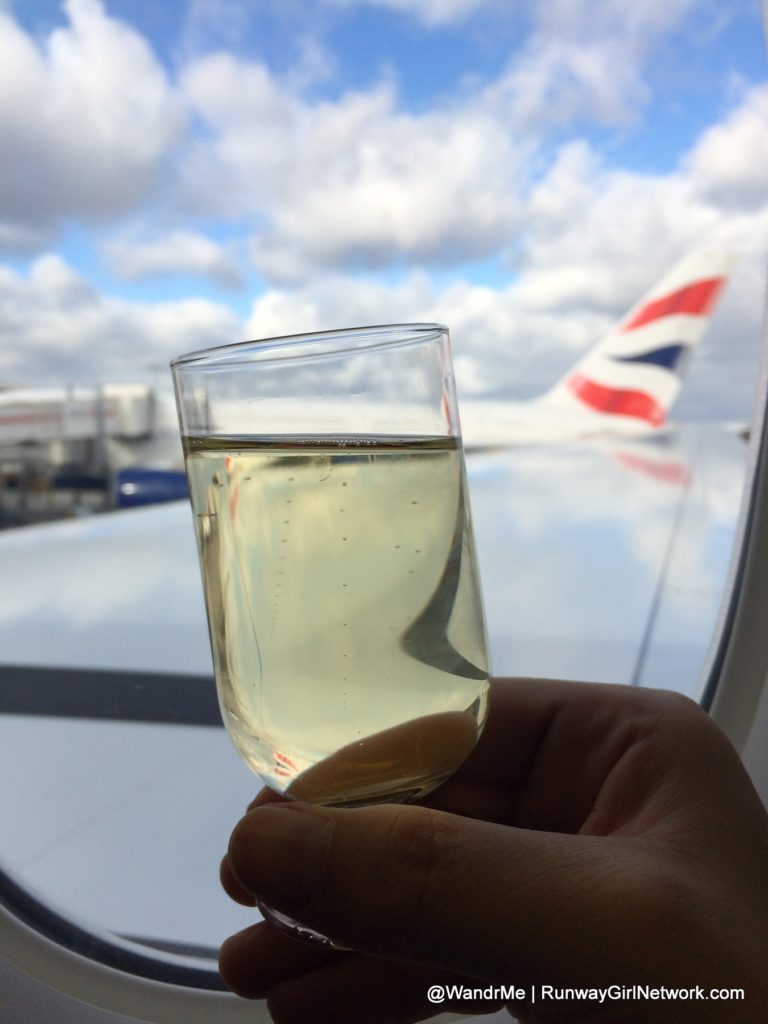 The main entrée served in premium economy is a business class-lite sort of offering. Chicken or beef were the options on each BA flight I’ve taken this year, but they were plated on real dishes rather than the foil tray typically seen in economy class.

BA likens the offering to a business class meal. The portion size is larger than economy so I suppose that’s likely true. I found the British beef option overcooked and dry even with the sauce served in a foil cup on the side; the chicken offered better flavors. A side-salad mush accompanied the meal (and I didn’t take a chance on it).

Fortunately, BA allows for pre-ordering of the entrée selection for premium economy passengers. Once I learned I didn’t care for the beef, I was able to ensure I would be guaranteed chicken on future flights. 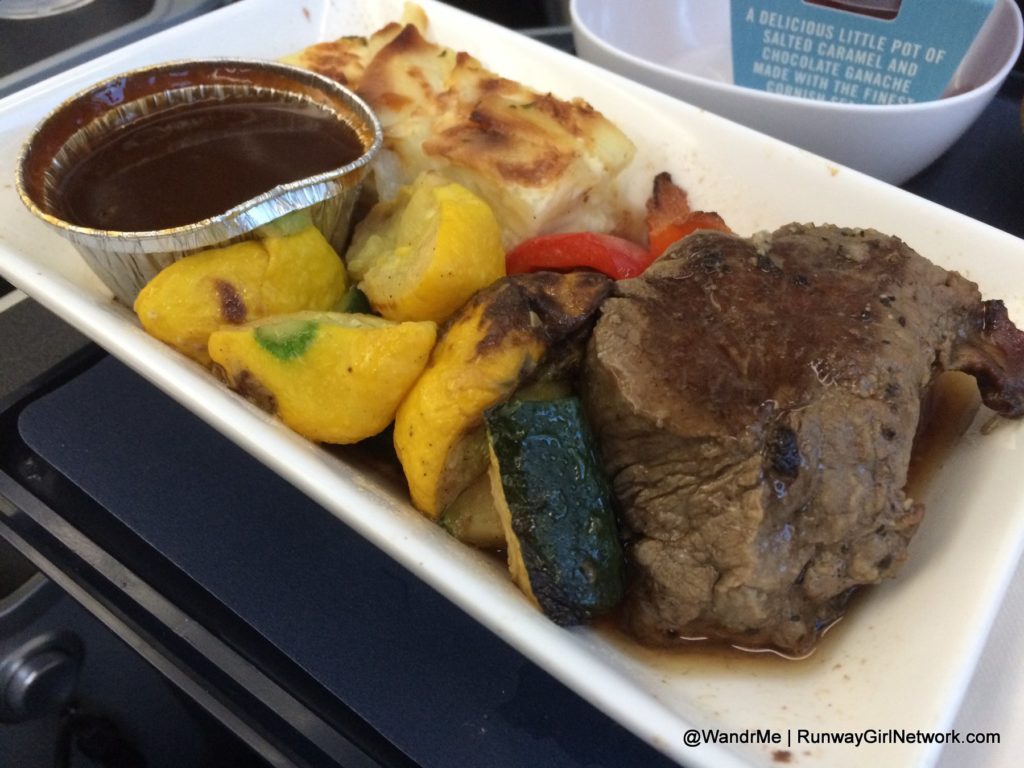 British Airways’ World Traveller Plus lunch meal; the beef is as overcooked as it looks.

But if you toss in a couple of mini bottles of wine or a cocktail around the meals, I’m usually a happy flyer, and BA did just that on this particular flight. Fast forward a couple hours, however, and things began to get dicey.

Want a snack? “Sorry, sir,” I was told. There was nothing available until the second meal service came around, 90 minutes prior to arrival. 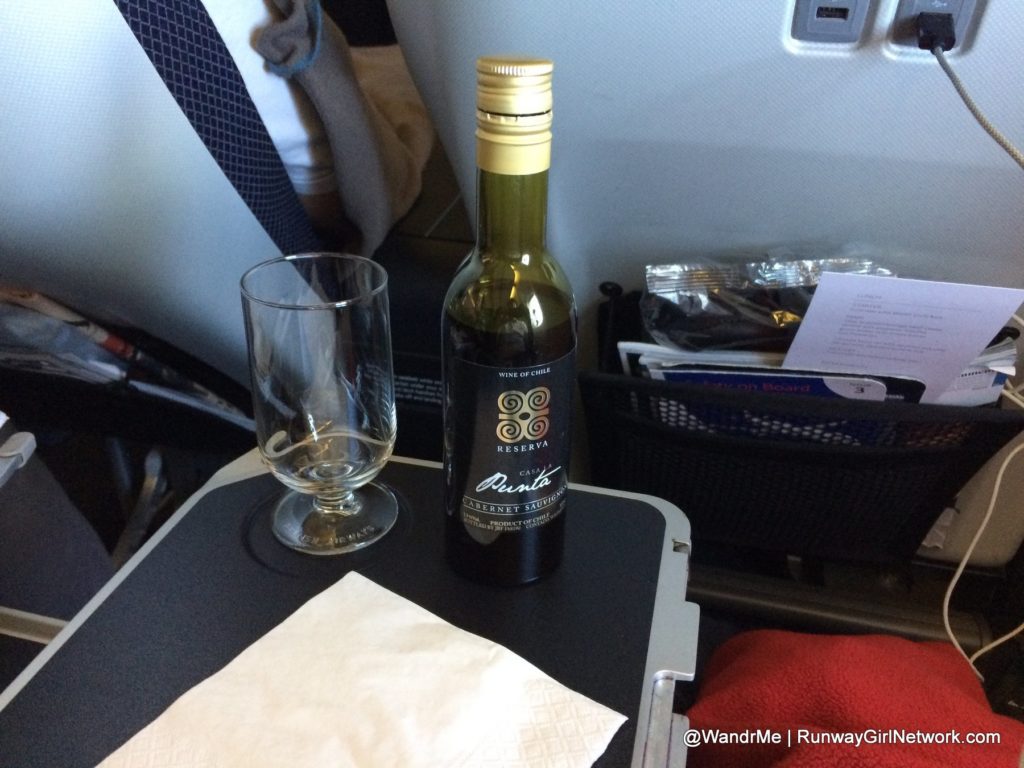 Plenty of legroom and a swig of wine, even of mediocre quality, keep me pretty happy on board.

I’m accustomed to receiving a rather disappointing second meal when flying. The “turkey puck” of Continental Airlines fame – a dry roll with some turkey product – is my baseline comparison, which is to say that I have pretty low expectations. British Airways managed to miss even that easy target. On its shorter hops out of London to the USA, there is no second meal. Passengers get a choice of snack from a basket. 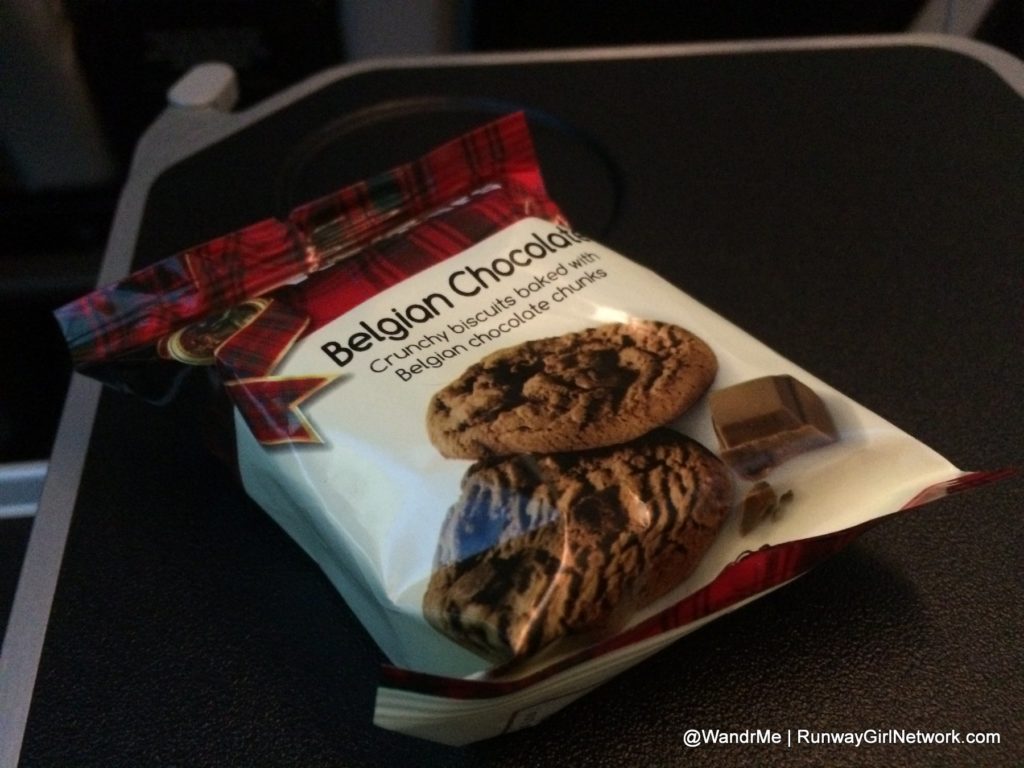 This is the second “meal” for British Airways’ World Traveller Plus passengers.

And woe be the slightly hungry traveller – perhaps uninformed or with a tight connection in London – who attempts to choose two snacks from the basket. The flight attendants are quick to reject that idea.

It is almost Dickensian, though the uproar was better contained than when Oliver asked for more gruel because the flight attendant moved on before I could really react to the shock of being rejected. 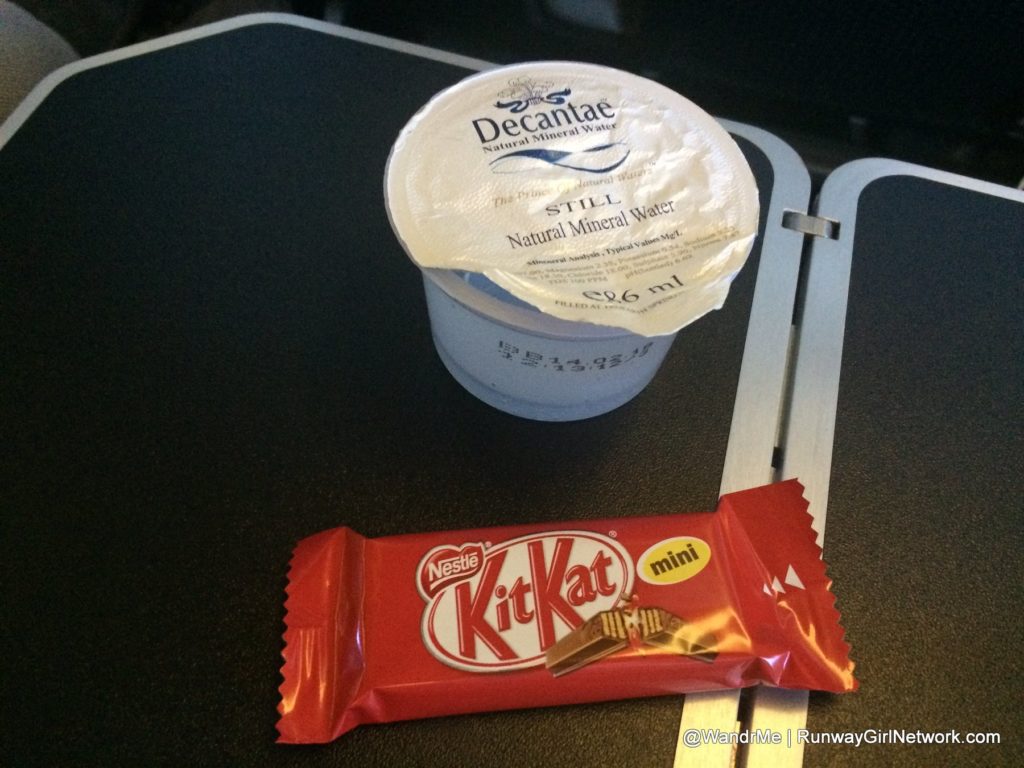 Another example of the second “meal” on British Airways.

On my second crossing I was fortunate enough to have a few spare minutes and snagged what passes for a decent take-away snack in London Heathrow Terminal 5 – a wrap from Starbucks. I was in the process of unpacking it as the crew distributed our mini-snacks, and my seatmate tried for seconds. He was similarly denied. In retrospect, it is much more amusing when you know it is going to happen and the “victim” does not.

And lest this comes across as the type of complaint that requires a deep dive into the occasional idiocy that is airline operations and cost planning, other BA passengers have raised the issue with me, unsolicited, in social settings. I’m not the only one who has noticed this service cut.

Overall the BA long-haul premium economy product delivers what I need: more space at a price point that is occasionally reasonable (I paid ~$650 return for each of my tickets thanks to a nice sale fare originating in Germany).

The consistency of product across the different aircraft is a bonus (given the choice, I’d pick the Airbus A380 over the others for the upstairs seating; it feels more spacious). The problems I have with the World Traveller Plus product are truly little things that I can mostly plan around if I’m paying attention.

But I’m pretty sure I’ll never get over the shock of that first time I tried to take a second snack. And, yes, that is a silly thing to get hung up on, but it really did skew the overall experience for me. 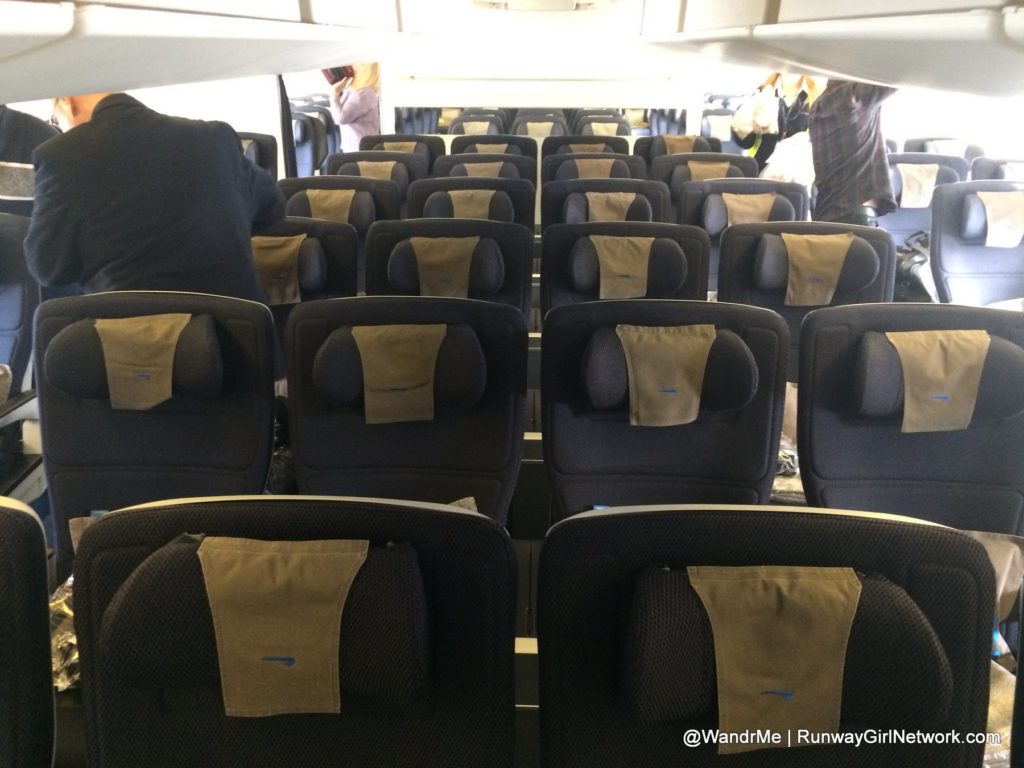 The British Airways World Traveller Plus cabin is consistent across all four fleet types; decent space and comfort on offer.