I had been dreaming of this my entire life, and I had a smile plastered on my face from ear-to-ear. It was September 24, 2011, the day I was to take my first flight in a small plane.

My sister’s friend and co-worker, John, had just completed his Certified Flight Instructor training, and Sara had shared with him my desire to be a pilot. So John reserved a Piper Archer for us and invited us to fly. When we arrived, I looked over the small, unfamiliar aircraft with great anticipation, while John completed his pre-flight inspections. He deemed the aircraft suitable for flight, and I felt my heart soar. It was time to go flying.

My sister and I found it strange to enter the airplane by climbing on top of the wing. Sara got into the back and I crawled into the left pilot seat, while John climbed into the right. I took in all the unfamiliar buttons and controls and marveled at how different the cockpit of this small, general aviation aircraft was to the commercial airliners I was more accustomed to.

One of the most exciting things about this moment was getting to put on a real pilot headset. I looked back at Sara and gave her a cheesy grin. Instead of smiling back at me, Sara’s eyes grew wide, taking in the two sets of controls. It had never donned on her that I might get to be in control of some of our day’s adventure. Later, she told me she had been having flashbacks to when I was first learning to drive a car and as the younger, dutiful sister, she had been relegated to the back seat as a terrified passenger. At least in this situation, John would always be the true pilot in command.

We settled in and John walked me though the startup checklist. With his assistance, I started the plane! We taxied to the run-up area. My instinct was to steer with the yolk, rather than with the rudder pedals. It was strange and difficult to steer the airplane with my feet. John suggested I sit on my hands. I steered the plane to the run-up area, where John walked me through the run-up and pre take-off checklists. Once complete, John notified Air Traffic Control and we taxied to the hold short line to wait our turn. My heart was pounding. I think Sara may have stopped breathing.

ATC gave us our take-off clearance and John quickly walked me through the next steps: “Release the brakes, push the throttle all the way in, check the gauges.” The engine roared, we rolled down the runway, and reaching rotation speed, John told me to gently pull back on the yolk. The ground slipped away and we were flying! I had just piloted my very first take-off. 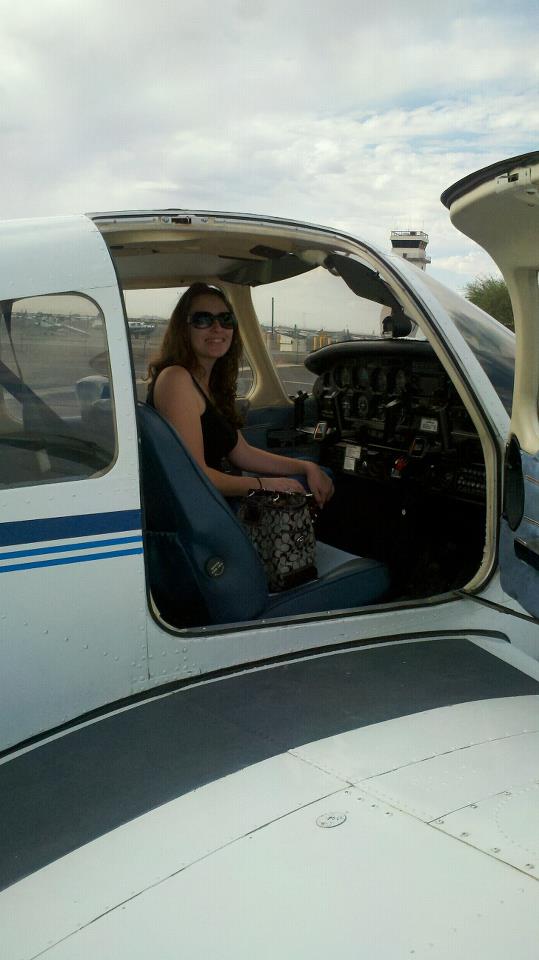 The first flight in a small plane can be a thrilling experience. Image: Melissa Myers

John resumed the controls and navigated to the practice area near the airfield, while Sara and I settled in and took in all the beauty of our panoramic view. As we entered the practice area, John handed the flight controls back to me and we did some basic maneuvers; turns, climbs and descents. Then John took back the controls and showed us what the airplane was really capable of, by performing steep turns, quick ascents and descents, demonstrating positive and negative g-forces, and a power-off stall and recovery. This was the first time I felt a bit nervous. Why would anyone want to intentionally stall a perfectly flying airplane? John explained why this was both a basic and critical maneuver, one every pilot should know how to execute.

John also demonstrated that, in the event of an actual engine failure, the airplane is able to glide without any power being applied for a considerable distance, which wasn’t what I had expected. Drop-straight-down-spiraling-to-our-imminent-death was more along the lines of what I would have expected. After establishing a glide, John explained how to attempt to restart the plane in this situation, and failing that, the necessity to quickly locate a smooth, flat surface on which to land the plane: a road, field, dry lake bed, or other similar surface. I surveyed the ground below and found a nearby field with a dirt road. We circled the field for a minute or so, while gradually losing altitude. I was surprised at how long we remained in the air without power. I discovered that these little airplanes really are made to fly, and to fly well.

Before we knew it, our hour was up and it was time to return to the airport. John piloted us back to the airstrip and landed the plane with ease. I assisted with taxiing to our parking spot. While I was bummed that the flight was over, I could tell by Sara’s expression that she was relieved.

My biggest take-away from this flight was experiencing how well a small airplane handles and flies, and also how a professional pilot can make it all look so easy. There is a genuine skill and craft to flying well.

This experience also solidified my desire to pursue a career as a professional pilot. Viewing the world from the cockpit of a small airplane, looking down at the landscape from above, made me think back to that little girl I had been – not so long ago – lying in the grass, looking up, and dreaming she could fly.