Vancouver-based ultra-low-cost start-up Jetlines will only offer passengers inflight Wi-Fi if it pays the airline to do so, but will rent passengers tablets loaded with inflight entertainment content for a fee, according to CEO Jim Scott.

In an exclusive interview just before the opening of the 37th Annual North America Airfinance Conference in New York, Scott tells RGN that Jetlines expects to start flying in 2018 after Transport Canada has analyzed the company’s Management Discussion and Analysis submission and licensed the carrier to operate scheduled services.

Jetlines, which came to the aviation world’s attention in December 2014 when it ordered five Boeing 737 MAX 7s and secured purchase rights on 16 more, will begin service in 2018 with four leased 737-300s configured in one-class configuration with a 30-inch seat pitch. The carrier will then start adding 737-700s and 737-800s, taking two additional aircraft in 2018 and then adding five more aircraft each year. 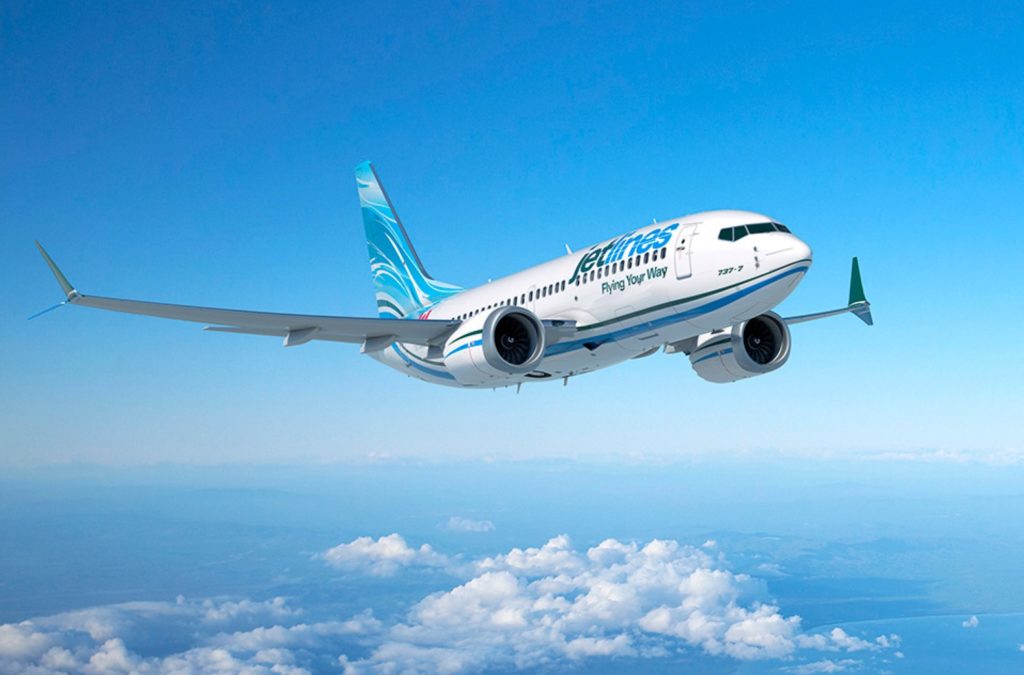 Canadian ultra-low-cost start-up Jetlines ordered five Boeing 737 MAX 7s for delivery from 2023 and secured purchase rights on 16 more, but CEO Jim Scott tells RGN the carrier has the right to specify any of its 737 MAX deliveries as 737 MAX 8s instead. Image: Boeing Commercial Airplanes

As regards offering inflight connectivity to passengers, Scott says, “We have really looked at this. Millennials want plug-in power” for their own electronic devices and Jetlines intends to provide this. But for connectivity itself, “there seems to be a question as to the cost recovery of the service. If we can’t justify it as a point-of-sale profit center, we won’t put it in.”

Another factor Jetlines is taking into account is that the aerial-and-radome installation required for a satcom-based inflight connectivity system creates a 3% fuel-burn penalty, says Scott, adding, however, that Jetlines will make content-loaded tablets available for rent in-flight.

Although Jetlines is positioning itself as an ultra-low-cost carrier and is planning for a unit cost per available seat mile (CASM) of C$0.101 – WestJet’s 2014 CASM was C$0.137, 36 percent higher – Scott says it is aiming to achieve a SkyTrax three-star service rating, as has WestJet. Unlike the other Canadian carriers, which Scott says offer passengers food and beverages twice during a typical Vancouver-Toronto flight, “We will serve the customers all flight long.”

However, none of the food and beverages Jetlines offers will be free. Customers will be able to prepay for it online (or perhaps from the tablets they rent or from their own devices) “and the flight attendants will deliver it straight to passengers,” says Scott. “We have to be price-sensitive,” but Jetlines will focus on providing “passenger-first service”.

While much of Jetlines’ network strategy in summer will focus on serving the big east-west market between Vancouver and southern Ontario (and using Winnipeg as a secondary hub), Jetlines will avoid the high cost of serving Toronto’s biggest airport, Pearson International. “We’ll be focusing on [serving] major to secondary centers. We will circle Toronto, using various secondary airports as exit points,” says Scott.

The Canadian Government recently launched a new initiative to take the pressure off Toronto Pearson by establishing an 11-airport organization called the Southern Ontario Airport Network. “That’s where they want us to fly,” says Scott. “We’ll be serving smaller communities, at a reduced rate. These will include the airports serving the southern Ontario cities of London and Hamilton. Jetlines will rely on local transit authorities to provide any ground-transport links for passengers wishing to travel between those cities and Toronto itself.

But the major southern Ontario focus for Jetlines will be Region of Waterloo International Airport, which serves the cities of Kitchener and Waterloo. Major IT companies such as Google have their main Canadian offices around Kitchener and Waterloo, so the area represents “Silicon Valley North”, according to Scott. “But they only have one [domestic trunk] flight, to Calgary – they have no other connectivity.”

Jetlines will change this and also will offer international passengers flying from Asia new opportunities to connect at Vancouver, which – remarkably – has no home-town airline yet. Since the only global alliance to which any Canadian carrier belongs is Star Alliance, customers of other alliances struggle to connect at Vancouver. While WestJet might ultimately fill the oneworld connecting requirement in Canada, says Scott, “There is a lot of freelance flying available where customers can fly,” to secondary Canadian destinations such as Banff.

Canada’s east-west domestic market is strong in summer but weak in winter, “so you have to have an aircraft that can jump over the US and get into Mexico,” says Scott. Accordingly, Jetlines will also offer year-round flying to US vacation destinations such as Los Angeles, Las Vegas and some Florida cities, as well as winter-season flying to other destinations in the southern USA, Hawaii, the Caribbean and Mexico.

The carrier plans to base half its fleet at Vancouver and half at Region of Waterloo International Airport. However, future network expansion is also likely to see Jetlines launching service from Canada’s eastern-seaboard cities to the USA. “The ‘Maritimes’ [such as Nova Scotia] lack service to the US – you need to go via Toronto now,” says Scott. “We see that as more as point-to-point markets,” and Jetlines wants to serve them.

The five new 737 MAX 7s that Jetlines has ordered are due to be delivered from 2023. Each would be fitted with 162 seats in one-class configuration if delivered as a 737 MAX 7, but Scott reveals Jetlines has the option to specify any of the five as 737 MAX 8s instead. Asked why Jetlines ordered the 737 MAXs, Scott says that while fuel is cheap today and airlines can make money with older and current-generation aircraft, that won’t always be the case. So it makes sense to order more fuel-efficient aircraft for the medium term. 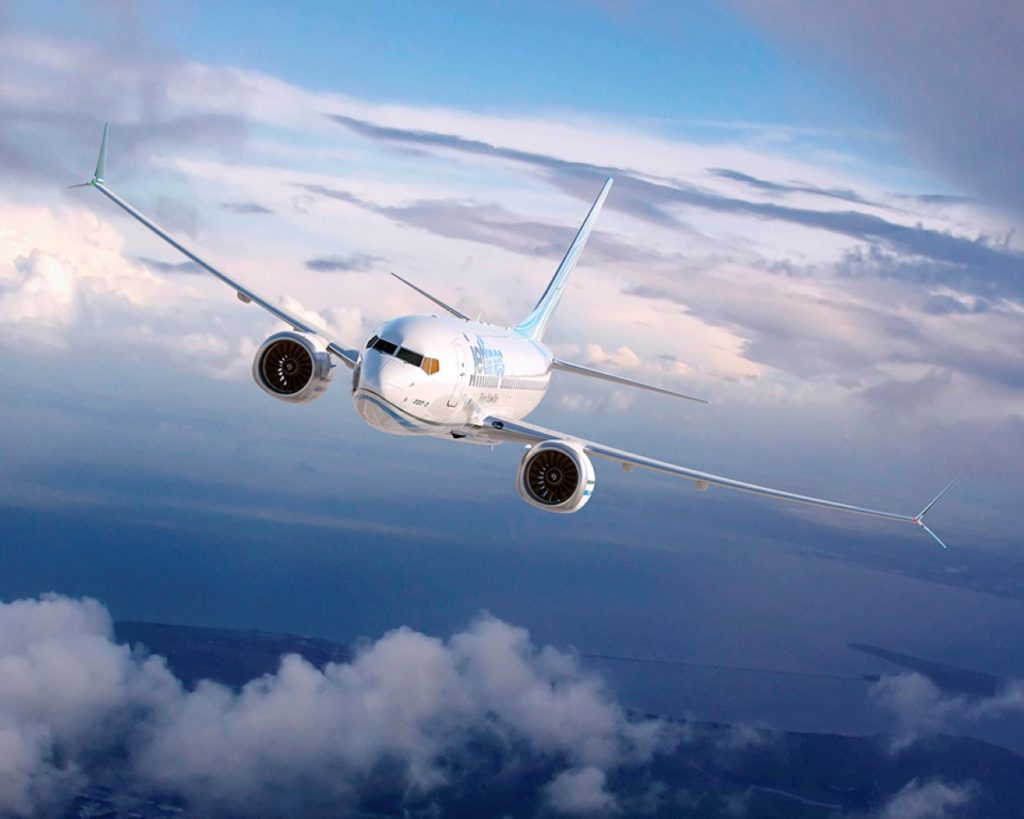 Vancouver-based ultra-low-cost carrier Jetlines expects to begin scheduled services in 2018, initially flying four leased Boeing 737-300s and then adding a mix of leased 737-700s and 737-800s to its fleet. In 2023 it will being taking delivery of up to 21 new 737 MAX aircraft for which it has given Boeing orders or commitments. Image: Boeing Commercial Airplanes