United Airlines yesterday took its new Polaris product to the skies on the first Boeing 777-300ER to feature the new business class seats.

During a media event, United showed off the end-to-end Polaris experience, including the new Polaris lounge at Chicago O’Hare airport, the onboard hard product, and some of the soft product, though that last bit has been flying for the last 10 weeks.

The new plane, which flew from Chicago to San Francisco for demonstration purposes, also means a new coach class experience for United customers. Your author opted to test the economy hard product for the purpose of this report.

The new Polaris lounge product launched at O’Hare in December along with the new onboard food and bedding offerings. It is spacious, offers complimentary premium alcohol and a variety of hot snacks for pre-flight dining. The lounge also has sleep pods and showers available.

The snacks were tasty with a good variety of flavors available. But the serving size suggests that these are definitely snacks, not meals. A full pre-flight meal, especially for service from Newark, Washington-Dulles or Chicago to Western Europe, would make the offering even more competitive and complete. It would be similarly valuable for the late-night departures to Australia and Asia where sleep is the key focus for most passengers, not a two-plus hour multi-course meal service on board. [Note: United has since reconfirmed that the lounge will offer sit-down meal service as well, though this was not included in the media event.] 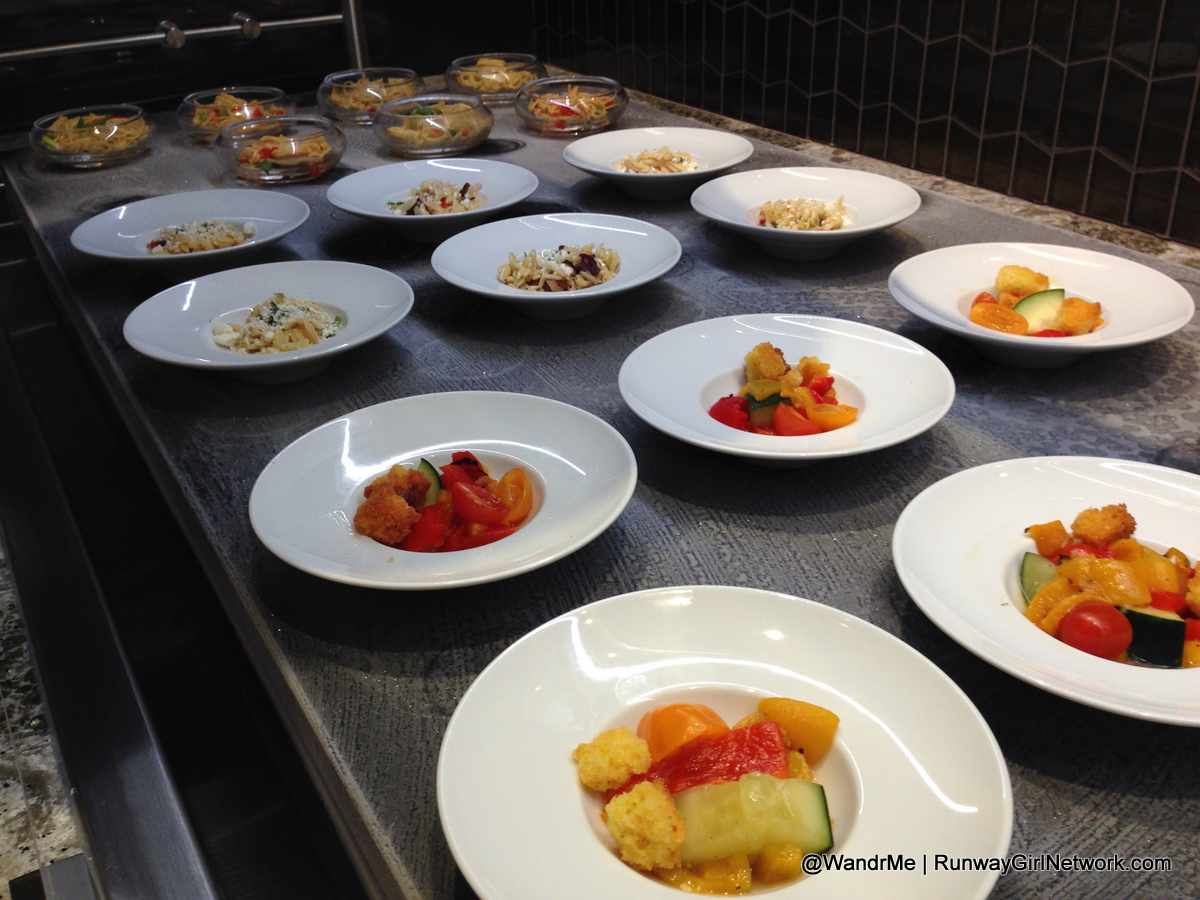 Small bites are available for snacking in the Polaris Lounge at O’Hare.

The seat in any business class cabin is nearly everything when it comes to delivering a comfortable sleep experience and United’s new Polaris seat, developed in conjunction with Zodiac Aerospace and design firm Acumen, presents three distinct seat shapes for travelers, each with a sleeping space measured at 6’ 6”.

The staggered layout delivers direct aisle access for all passengers, in part thanks to a narrow gap that allows the “inside” seat of each staggered pair to reach the aisle. The “outside” seat in the pairs is slightly angled and a few inches wider at the elbows; the angle also means that the foot well narrows at the tip, reducing the sleeping space of the bed if your feet extend the full length. The narrow foot well has been a concern on United’s BusinessFirst seats and the bulkhead on the current generation offers the most space, a design decision that carries over to the new Polaris seat as well.

Panasonic is also providing the inflight connectivity service on board with its Ku-band satellite eXConnect platform, though the system was not fully functioning during the demo flight leading to some frustration from members of media, who had hoped to share photos and videos in real-time.

Multiple power points and a phone/tablet holder built into the tray table (useful if accessing the large streaming-media library on your own device) round out the well-rounded entertainment offerings. 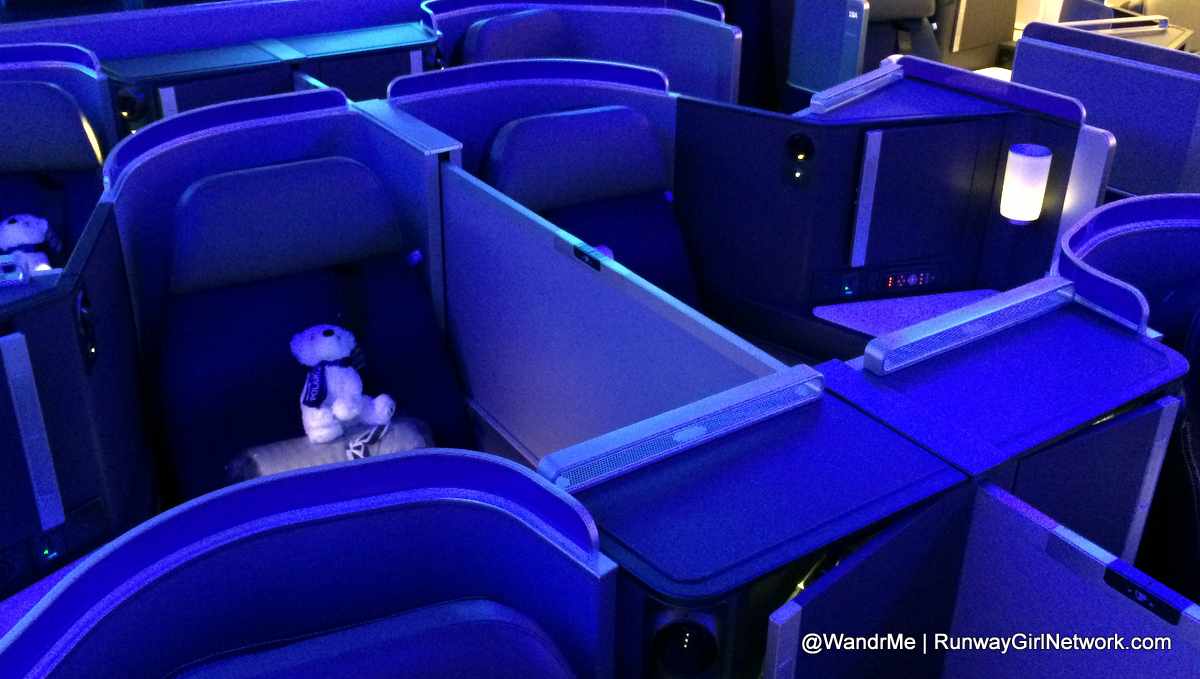 The Polaris seats also include some small touches such as a handle for helping passengers pull themselves up from the seated position, something CEO Oscar Munoz specifically cited in his pre-flight speech. Yes, it means that pulling on the seat in front of you is easier but it is also a built-in design element so hopefully it will reduce some of the potential disturbance of said pulling.

I covered the new Polaris dining setup and bedding (both of which I mostly like over the prior versions) in my previous review of the soft product. But I also had the good fortune to sit across the aisle from United’s Executive Chef Gerry McLoughlin during the flight and talk through the new concept and some of the differences the 77W presents for the crew.

McLoughlin confirmed that the menus are on a seasonal cycle with main courses changing quarterly; 1 March starts the next cycle. All US stations offer the same options for outbound intercontinental flights while the inbound service is regionalized, taking advantage of the local kitchens’ flavors and dining styles. 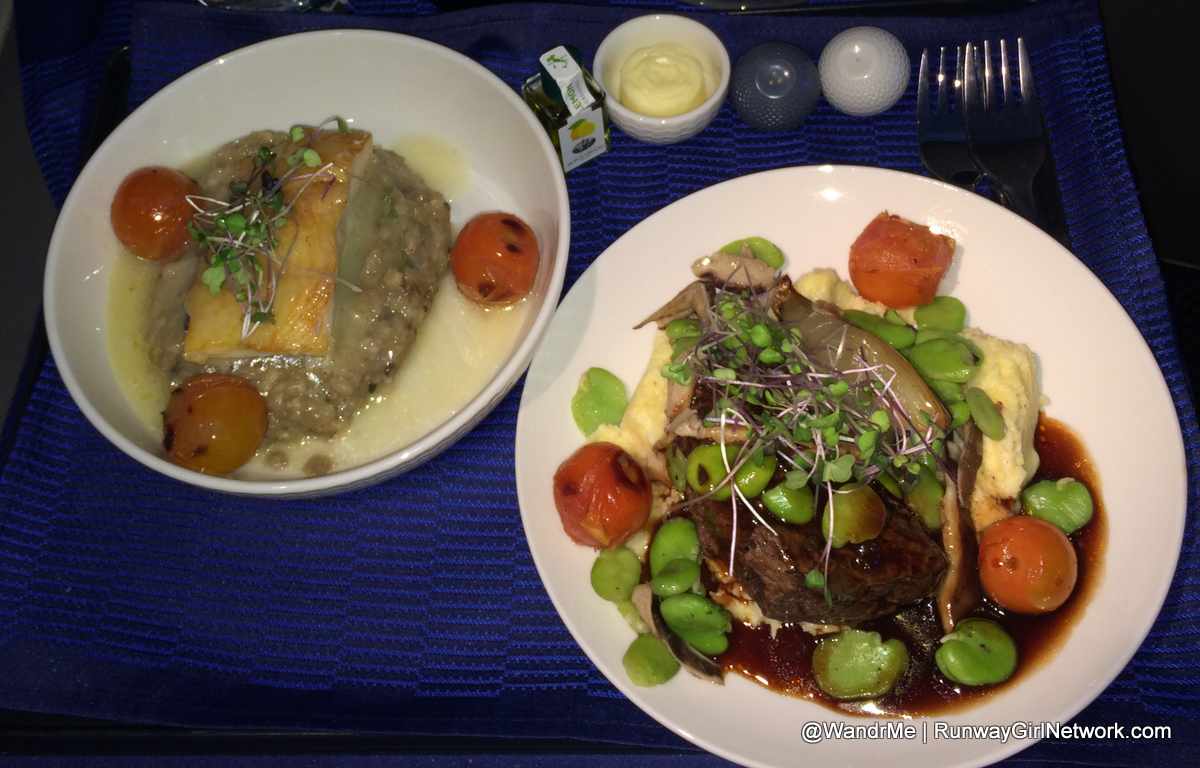 I tried two of the main courses; the fish outshone the beef by a wide margin.

McLoughlin also spoke to some of the improvements the new galley offers, including a steam option on the ovens to improve the moisture levels of the main courses. The turbot entrée definitely delivered on that front; the short rib less so.

This steam feature does create a scenario where the product will vary slightly between the 77W and the other aircraft that will be converted to carry the Polaris seats. Hopefully it won’t be too noticeable in the dining experience. 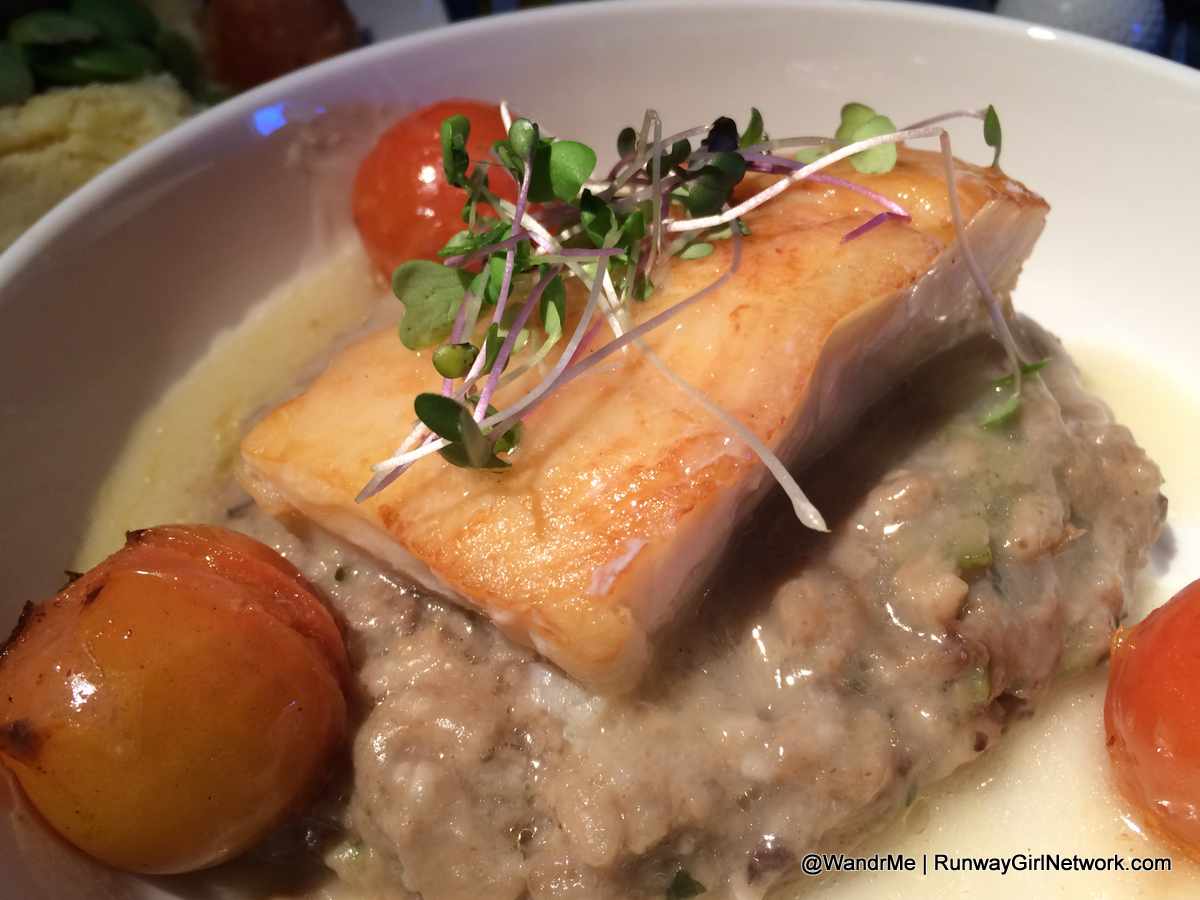 Turbot with mushroom risotto; juicy and delicious thanks in part to the new steam ovens on board.

Overall the Polaris product is a solid upgrade to the prior BusinessFirst generation of seats and service. It offers a superior seat, more privacy and direct aisle access with fully flat beds, besting some of the competition while coming up short compared to others. It is not the most luxurious nor the most spacious business class product flying but it was never expected to be. As a customer who is mostly focused on sleeping while on board, I feel that the new seats deliver. Plus, one has the opportunity to watch a few movies and nosh on a decent meal if so motivated.

The decision to go 10-abreast in economy class is not surprising but also not particularly comforting for those who fly in the back. The seats are tight, with three of us rubbing shoulders and elbows while trying out the space. I’ve done the 3-4-3 layout a few times now and it feels even a smidgen tighter to me than the Boeing 787’s 3-3-3 layout, though that may just be psychological, as one sees an extra human in each row of the 10-abreast 777.

Checking out Economy on the 3-4-3 @united 777-300ER with @WandrMe and @e_russell. Shoulder to shoulder. #PaxEx pic.twitter.com/V9dn14etUE

Some design decisions make the center four seats materially less desirable than the seat triples. The mounting rails for the seat leave space for only three bags under the row and the aisle seat passengers do not really have space between the riser and the aisle for their outside foot. Plus the aisle seats measured a quarter-inch narrower between the armrests than the other seats in economy.

There are some very real challenges for economy class passengers in these seats. 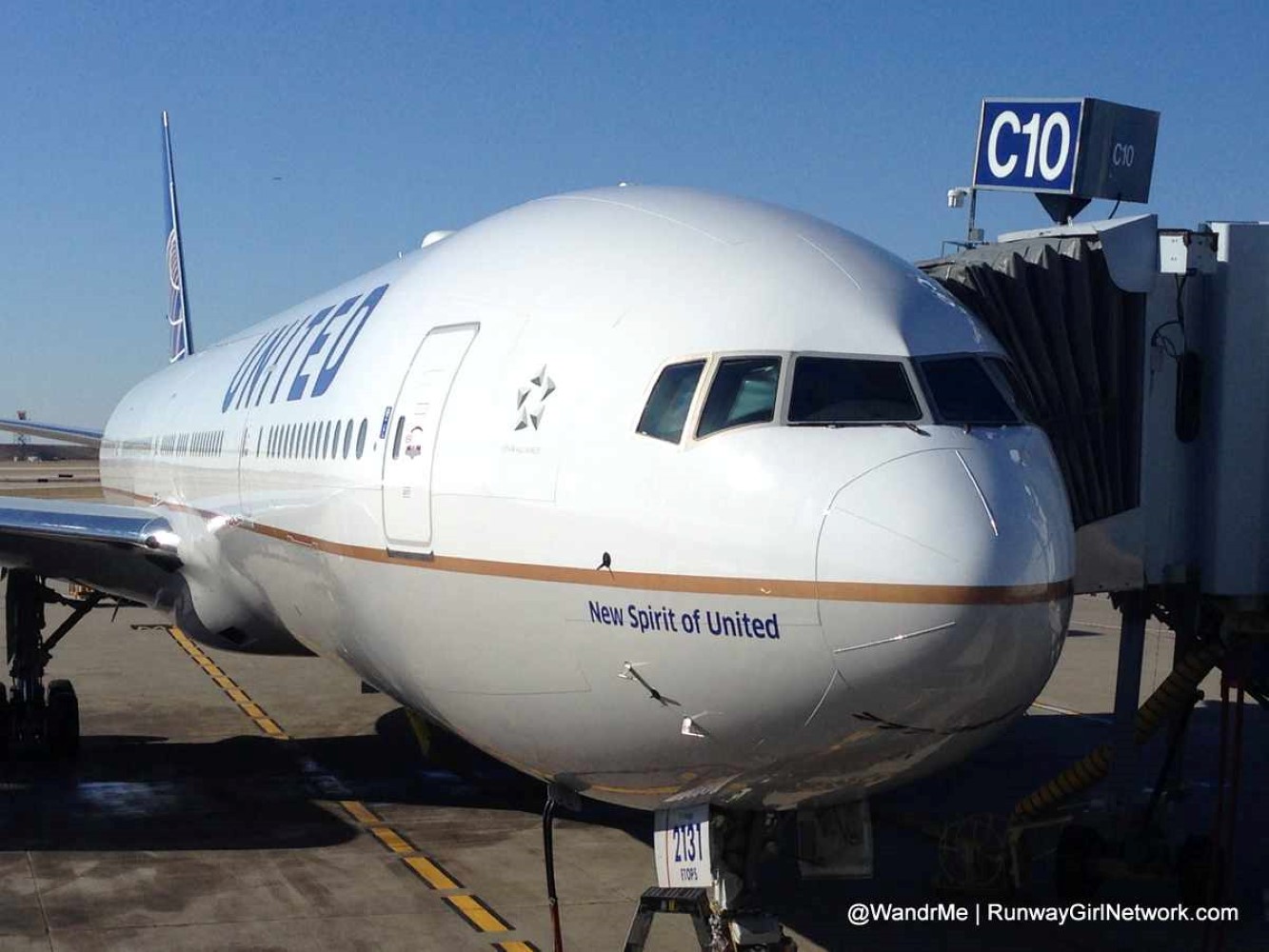 The “New Spirit of United” set to take flight with the new Polaris product on board.

United Airlines covered my airfare costs to participate in the media flight.