After having successfully demonstrated via test flights that the Iris Precursor satcoms project can fully complement and even potentially replace VHF Data Link Mode 2 (VDL2) terrestrial data-link communications in continental European airspace, Inmarsat and the European Space Agency (ESA) are now preparing for large-scale flight trials by the end of 2017, Runway Girl Network can confirm.

For the uninitiated, Iris is a key part of the Single European Sky ATM Research (SESAR) initiative, which promises to boost efficiency, capacity and performance of air traffic management (ATM). Providing the satcoms technology for this program, Iris’ rollout has been divided into two phases: ‘Iris Precursor’ for the short to medium term, which will evolve into the full Iris service, supporting the long-term objectives of SESAR.

The four flights demonstrated that the system allowed aircraft to negotiate satellite spot-beam exchanges; that it worked with different ATC communications systems in different countries; that it provided four-dimensional flightpath reporting capability; and that SwiftBroadband-Safety’s ACARS over IP capabilities worked in concert with CPDLC messaging, according to Joseph Teixeira, Inmarsat’s VP for aviation safety and cybersecurity.

The flight-test results were more than encouraging. The trials demonstrated that “not only is [Iris satcoms data-linking] robust enough to serve as a back-up to or complement VDL2, its performance rivals that of an uncongested VHF network and it could serve as a primary link itself,” says McMillan.

Now Inmarsat, ESA and their industry and government partners in Iris Precursor are preparing for the project’s next step, labeled ‘Service Evolution’. This will see “very large-scale” flight demonstrations conducted by several European airlines in late 2017 and 2018 in cooperation with Inmarsat and the project’s partners, says Teixeira.

These trials aim to demonstrate that the Iris Precursor partnership can grow into an organization which can provide satellite-supported CPDLC “on a lot of aircraft … to that same level of performance” simultaneously, so its standard is “demonstrable and [can be] certificated by EASA,” explains Teixeira. “We are working with SESAR (Eurocontrol’s Single European Sky Air Traffic Management Research initiative) and the European Union to work out what that very large demonstration will provide.”

McMillan says Inmarsat is also now in discussions with “certain European airlines that are participating” in Iris Precursor, to make sure “the benefits that VDL2 promised – reducing track miles and fuel – could be enabled by Iris as a complement.”

Once the large-scale flight demonstrations on commercial aircraft are complete, “we expect the system to be operational … in mid-2019”, says Teixeira. The plan for “commercial service integration is agreed with ESA and we are talking about it with the European Union and others for planning” purposes.

By mid-2019, “We should have service availability throughout continental Europe, but in reality, for us, planes don’t stop at the border. We are going to have global services available at that date,” adds Teixeira. Asked to clarify this statement, he confirms: “By mid-2019, for properly equipped aircraft, we would offer oceanic and remote terrestrial service as well.”

However, McMillan reveals that for the project’s long-term evolution, ESA and Inmarsat have increased the project’s partnership complement to 34 organizations. Among them are most “upper airspace” ANSPs which control oceanic and/or remote terrestrial airspace, airlines, government organizations and the two largest airframe manufacturers. (Airbus successfully completed a flight-test last March under its Low Cost Cockpit Satcom project to demonstrate that Inmarsat’s SwiftBroadband-Safety conduit “could support all of their modernization requirements,” notes McMillan.) 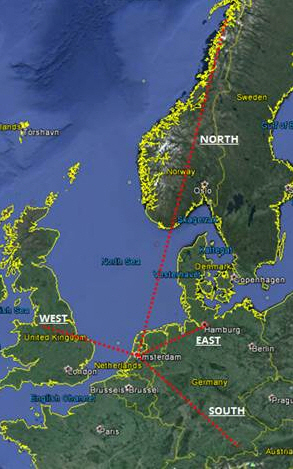 These are the routes from Amsterdam that the NLR Cessna Citation flew for the initial four test flights involved with the Iris Precursor project. The aircraft flew outbound tracks and then without landing at other airports returned along the same routes to return to its Amsterdam base. Image: Iris Precursor

One aspect of Iris CPDLC messaging Inmarsat highlights as an improvement over VDL2 is the increased messaging security it offers. “One of the cornerstones of Iris is the security element – it travels over IP, so it has many additional safeguards,” says Teixeira. In fact, says McMillan, SwiftBroadband-Safety is “really the first secure aeronautical communications network – ACARS is open-source VHF.”

In another key development, McMillan reveals that while the Inmarsat-4 satellite constellation’s coverage already extends from 84 degrees North latitude to 84 degrees South, covering “99.5 percent of all commercial flights”, it has plans to improve that, to provide communications for the increasing aviation and maritime traffic operating in the two polar regions – particularly the Arctic.

There is “an active project underway within Inmarsat” to provide complete polar coverage, which “would be able to integrate into our existing satellite networks,” says McMillan. “This might be a mixture of additional satellites in elliptical orbits, adjusting the inclination of existing satellite constellations and some ground-based augmentation.”