In February of this year the White House Council on Women and Girls in collaboration with the Office of Science and Technology Policy published a very illuminating Fact Sheet geared towards the entertainment industry entitled STEM Depiction Opportunities. Citing the “diversity challenge” that exists on many college campuses today where minorities and women make up 70% of college graduates but only 45% of actual degrees in STEM-related fields, the forward-thinking white paper encouraged storytellers everywhere to “paint the picture of an inclusive STEM-related workforce that the nation intends to be” in entertainment media and beyond.

Emphasizing the power and lasting impact of offering up diverse onscreen role models of women, minorities and other underrepresented groups pursuing thriving STEM-related careers, more than anything else, the report highlighted the simple fact that in today’s truly digital age, optics matter. And that goes tenfold for the Internet, where most Google and Yahoo! image searches for words like “engineer,” “airline pilot” or “president” are almost entirely dominated by pictures of men.

Talk to me about Re-Search, where was the idea born, what inspired it, and how does it all actually work? In other words, give me the Re-Search “origin story.”

PN: Semcon develops products for everyone. That is why it is important that all kinds of people consider becoming an engineer. The more perspectives we have in our problem solving, the better the products we develop will be. Today there are too few women in the industry, and too few women working at Semcon. We want to change that!

Re-Search is an attempt to broaden the image of who can be an engineer. With the help of a clever technological solution, we can at least create a more inspiring and gender-balanced image of the engineering profession, and do the same thing for 60 other jobs. Re-Search is a browser extension that contains a list of professions where the image search results are dominated by either men or women. When the user does an image search for a profession which is included on the list, Re-Search does a modified search which aims to find images of the underrepresented sex. The results are then shown in a new search window. Re-Search is open-source [and] all of the different components are available on the Semcon GitHub page. At the moment, Re-Search focuses on gender-balanced images. This is our starting point and in this context it is possible to add other one-sided search results. In the future it is possible to imagine that we will develop the extension to include other aspects. 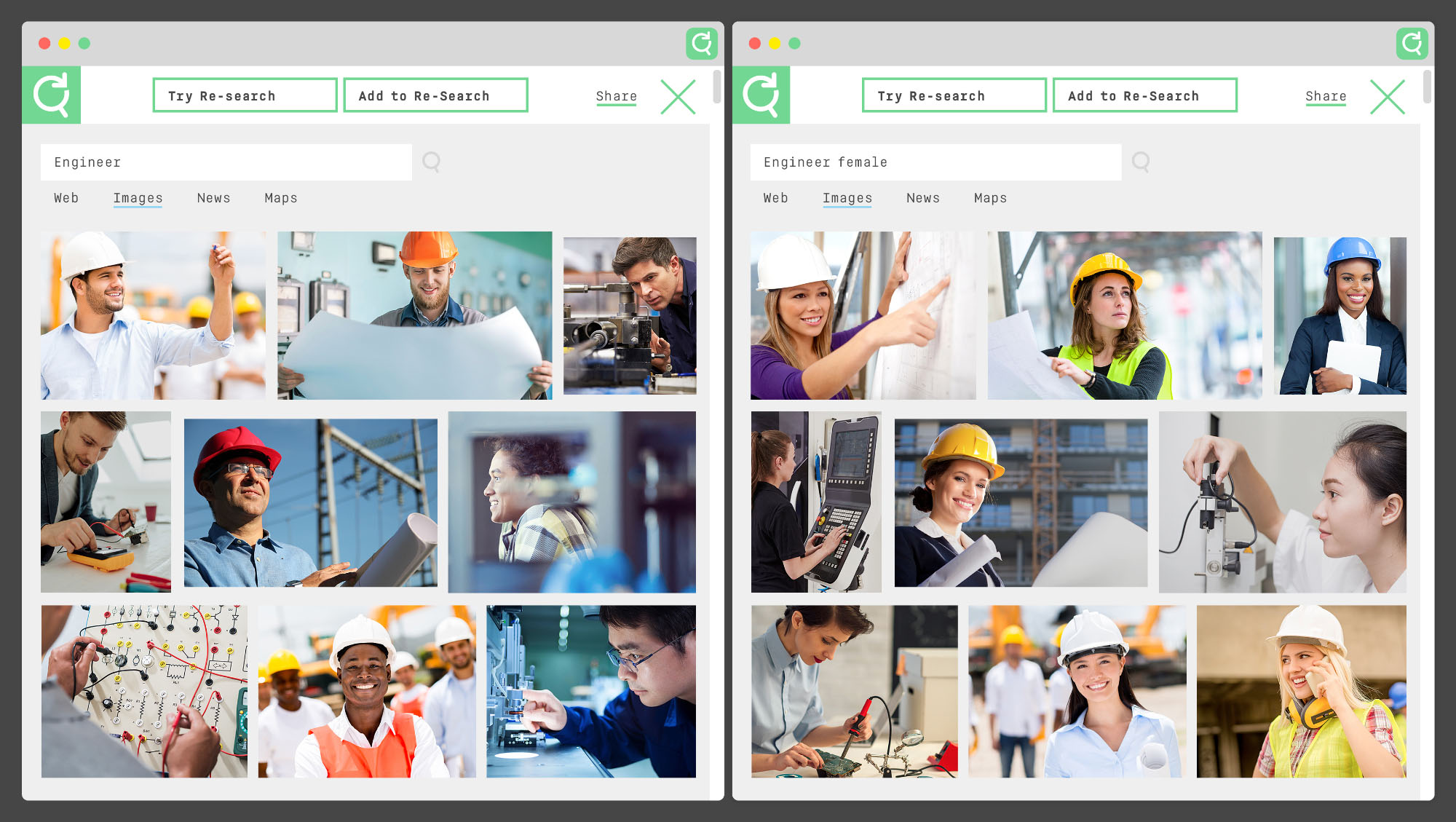 Wow, that’s very cool. Along those same lines, although popular hashtags like #leadHERship, #STEMinism, #WomeninSTEM and #IAmAnEngineer have been making waves across social media of late, as the father of a seven year-old girl it seems to me that these days optics matter just as much, if not more so, than words. Talk to me about how Semcon is hoping to change the way women and young girls view themselves, and the world at large, online.

PN: We wanted to create a more inspiring image of the engineering profession. Today, when young students, especially female, make an image search of “engineer,” they only see men with yellow hard hats. Not very inspiring. The lack of female role models is evident. It’s not a lack of images of female engineers, the problem is that they won’t show up in the search results. With Re-Search we will give the female images the same space.

I’m curious to know what you think about the age divide with Re-Search. For instance, kids my daughter’s age have grown up in a world with a black president, female leads in Star Wars movies and LGBT cartoon characters. Maybe I’m just being an optimistic, über liberal Californian here, but, in my experience, digital natives don’t view the world the same way people of my generation do. In fact, most of the kids, both boys and girls, in my daughter’s second grade class didn’t think a women running for president was a big deal at all, whereas people my age, who grew up with mostly old white men in power, knew that it was. So, my question is, what do you think? Is there a generational divide with users online? And do you foresee a backlash, for example, from older, more traditional users who might view Re-Search’s diverse search results as more liberal, politically-correct pandering? And if so, how do you propose to “start the revolution” with these users as well without turning them off?

PN: This is not a political campaign. All we want is to create a more inspiring picture of an engineer that can attract more talents, especially women, to our industry. We have to realize that [it is] mostly men that are developing tech product for everyone today – [including] women. We believe that there must be diverse development teams in order to create the most end-user-friendly products. To do that we need more women, but also a mix of ethnical backgrounds, age, experiences etc.. Also, many of the major tech and social media companies in the world have a majority of men in their development teams. How does that affect the outcome of the work? I’m sure that they, and we at Semcon, already create great products, but I’m also sure that the products would be even greater and more user-adapted if we would have more diverse and gender-equal teams. At Semcon we have set a target to be gender-balanced with a 40/60 gender mix globally by 2022. Even if this is a tough target to meet, it is just as necessary in order for us to develop the best products and perform even better. Our employees and our workplace are important to attract and retain talent. We are convinced that a gender-balanced workplace will be more inspiring, creative and fun to work at for both men and women.

I’m also curious to know what the reaction to Re-Search has been like from your users? I would imagine there is a lot of enthusiasm for the idea in tech circles, but have you encountered any resistance to the concept as well?

PN: We haven’t received any negative feedback from our customers. But just as importantly, we have gotten great feedback and engagement internally. I received this mail from a female colleague in the company: “This is amazing! What an inspiring and thoughtful concept! I am very proud of Semcon right now.” This is perhaps the best proof that we have succeeded. But please note that I also get similar internal response from our male colleagues.

Women pilots have been in the news a lot recently as well, talk to me about how important you think it is for young women and girls to see images of female pilots online. Particularly in countries where women’s rights are greatly restricted.

PN: I believe role models are always important. And it is many times difficult to identify role models with an image that is totally gender unbalanced. For us, engineers are mostly men, for you pilots are mainly men, and nurses are mostly women. Regardless of gender, it is the unbalanced picture that generates a lack of role models. We must try to change the perception of unbalanced professions [and] all initiatives are good. Otherwise these professions will continue to be dominated by one gender, and just as for product development for engineers, I’m sure that a mix of men and women will create better results and more inspirational and fun workplaces for pilots too.

David Pettet, the executive director for the National Gay Pilots Association, mentioned in a recent Lean Into Aviation profile on RGN that he was looking forward to a day when the world would have changed so much that there would be no need for advocacy groups like his anymore. What do you think, is that Semcon’s aim as well? To change the landscape online so much that you literally work yourselves out of a job?

PN: Totally agree. We hope that Re-Search will not be relevant in the future. But until then, we need to continue to highlight and work together to change and improve.

PaxEx 2017: As first class numbers shrink, the luxury will grow