Lines are long, planes are crowded, seats are often snug, and the overall air travel experience can leave one feeling less than enthused about flying. So anything that can help calm fraying nerves on planes these days is a most welcome effort. Well, almost anything.

Meet LiLou, a therapy pig and the newest member of San Francisco’s “wag brigade” of animals that tour the terminals to take the edge off of flying. Yes, a therapy pig. Which is cute if you’re in to that sort of thing, I suppose. But it also raises other challenges when it comes to the travel experience. 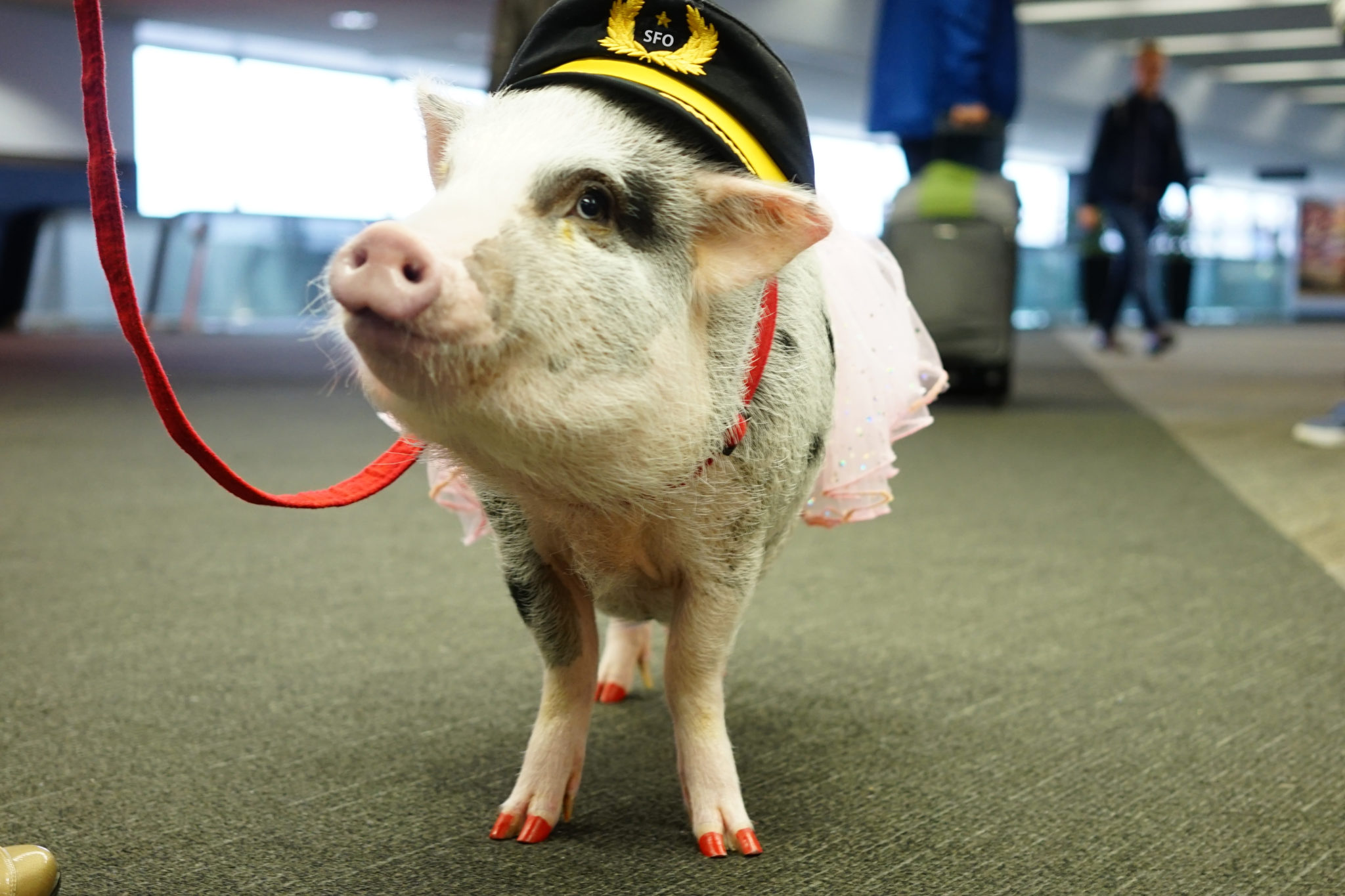 Whether it is a pet marmoset, a turkey or a pig, the variety of animals in the cabin is growing, as are the justifications for bringing them on board.

Assuring that it’s “a breeze for you to fly the friendly skies with your emotional support animal (ESA), as long as you have your dogs in a row”, the National Service Animal Registry states:

When you have an official and documented emotional support animal, the airlines are NOT allowed to charge you additional fees when your support animal accompanies you.

My Runway Girl Network colleague, John Walton, has previously written about his dismay that so many people are willing to pillory anyone traveling with a service animal as a fraud or faker. Google “emotional support pig” if you haven’t already, he urged, and read the sneering and loud cries of “fakery!”, and not just from the usual tabloid sources, with the usual sarcastic scare quotes around “emotional support animal”.

Yes, there are legitimate reasons for some passengers to have emotional support animals at their side. But I’m not on the same page as Walton. For those who want to fly with a pet but not pay the fees for the privilege, calling it an “emotional support animal” and securing the necessary paperwork means you’re in. And because the animal is considered a health-related need, and used to treat conditions that are not always outwardly visible, the rules around what airlines and their employees can ask are significantly restricted. These aren’t just my guesses about what is happening; I know people who flout these rules on a regular basis.

The animals can create very real problems for crew and travelers alike. For one, it means passengers with allergies must be extra vigilant about understanding what furry and feathered friends will be on board, and where. Notes one commenter to the Pet Travel Blog:

I had a recent experience on a flight which had several service animals on it – two seated directly in front of me. I am asthmatic and allergic to dogs and cats. I informed the flight attendant that I was asthmatic and the dogs were supposed to be 4 rows in front or in back of me. Well, the pilot wanted ME REMOVED from the plane for fear I would have an asthma attack.

Then there are challenges like animals defecating in the aisles, or impeding on other passengers’ already limited space in economy class.

Passenger on an Alaska Airlines flight from Chicago to Portland had a "therapy parrot". https://t.co/3TDpySCc7i pic.twitter.com/Efl7WfVM35

Some airlines and passengers are (finally) pushing back. They want the Department of Transportation to set limits on both the size and type of animals that are acceptable as service animals. Not surprisingly this can create conflict.

The other day on #JetBlue, an emotional support #Chicken 🐔took to the skies with its owner. What's next? 🤔 pic.twitter.com/MKaIIzPuHc

And so the introduction of LiLou at San Francisco becomes part of the conversation. Many airports have partnered with local shelters to bring dogs into their terminals in recent years. San Francisco is one of the earliest to do so, starting in 2013. Houston’s Intercontinental is a more recent adopter of the effort.

Ken Whittaker, manager of customer services for Intercontinental, says the goal of the program is to make the traveling experience less stressful and more pleasant. “These volunteers and their well-trained dogs are a fantastic way to achieve just that, and are just a part of the many ways the Houston Airport System strives to make traveling through our airports enjoyable and fun.” Similar programs now exist at many major airports, from Los Angeles to Charlotte to Miami and more.

Key to each of these programs is that the people and the animals are well-trained. It turns out that’s not actually a requirement when it comes to therapy animals on board. I am sure that LiLou is fine, but expanding from the realm of dogs to other animals in the terminal is an endorsement of similar actions on planes, and that’s a Pandora’s box worth of problems.

Calming passengers and adding a bit of fun and levity to the travel experience is great for everyone. Turning the airport or aircraft into a petting zoo is far less appealing. Couching it in the form of questionable medical certifications just makes things worse for those with real needs. And for me, bringing pigs into the terminal for fun is working against the greater good. 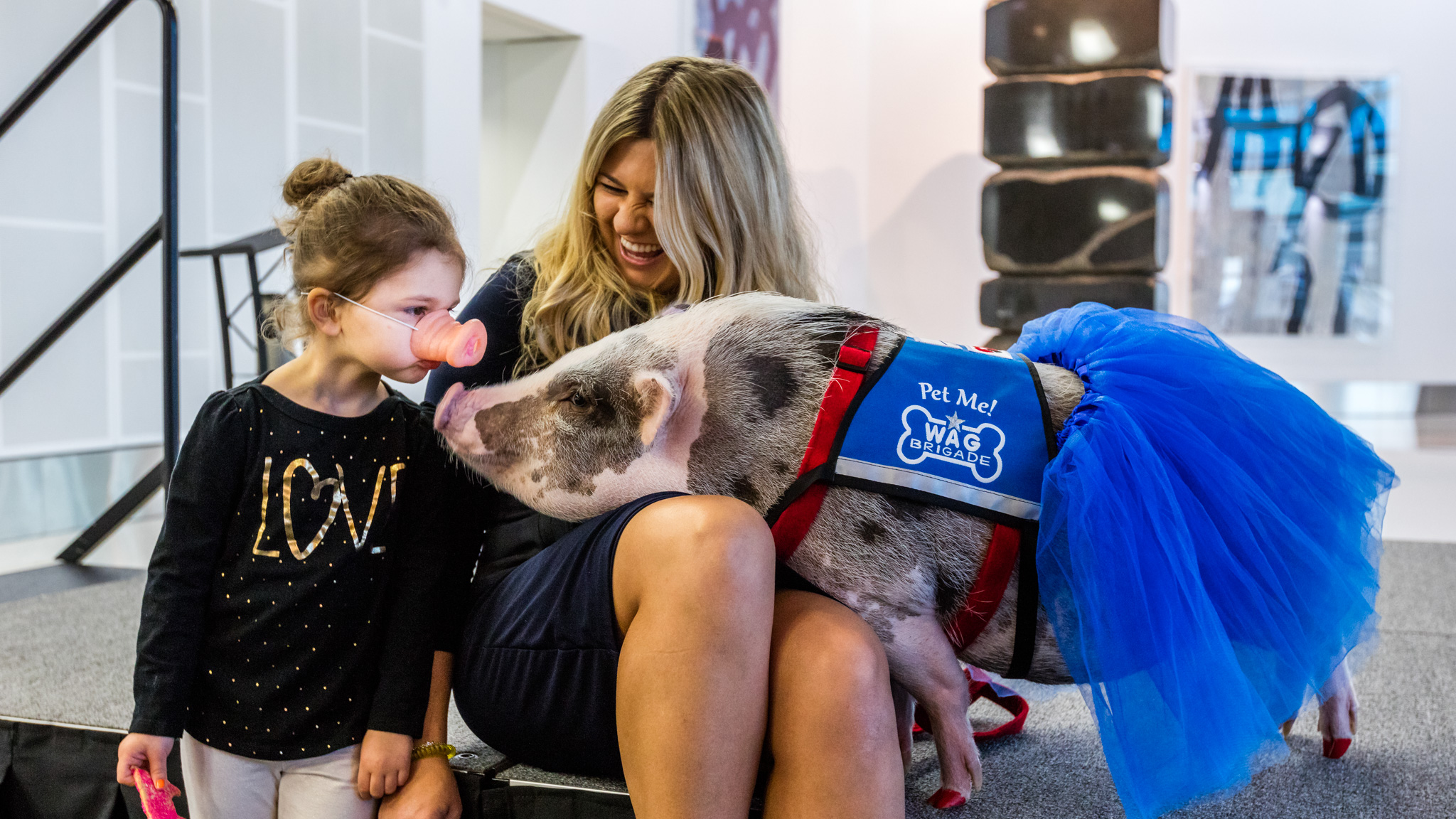 LiLou, dressed to impress, gives snout kisses to a young passenger hopefully calming them prior to takeoff or at the very least making the wait a little more entertaining. Image: San Francisco International Airport