A rose by any other name may well smell as sweet, but when an airline incorporates a distinct flower into the brand, only the original will do. Fresh blooms are a hallmark of premium service on several international airlines, but too often they are overlooked. To be completely predictable, I say to stop and smell the flowers, or at least these three most visible blossoms in the skies today:

When entering the First Class cabin on a Lufthansa flight, you might find yourself wondering if the airline makes a side business of hot houses. Roses are omnipresent, from the neat spray greeting guests at the front of the cabin to the prim bud vases brightening up the lavatories. And the Lufthansa rose is not just any rose; its shape is of the stage between tight bud and full bloom and, as LH expert and blogger Lufthansa Flyer notes, it is a Baccara rose of a uniformly deep and dark, velvety rich red that puts forth the impressions of formality and sophistication. Individual accent lights for each rose highlight their presence and elevate them to more than just welcome pops of color; they are an element of luxury to be openly admired. 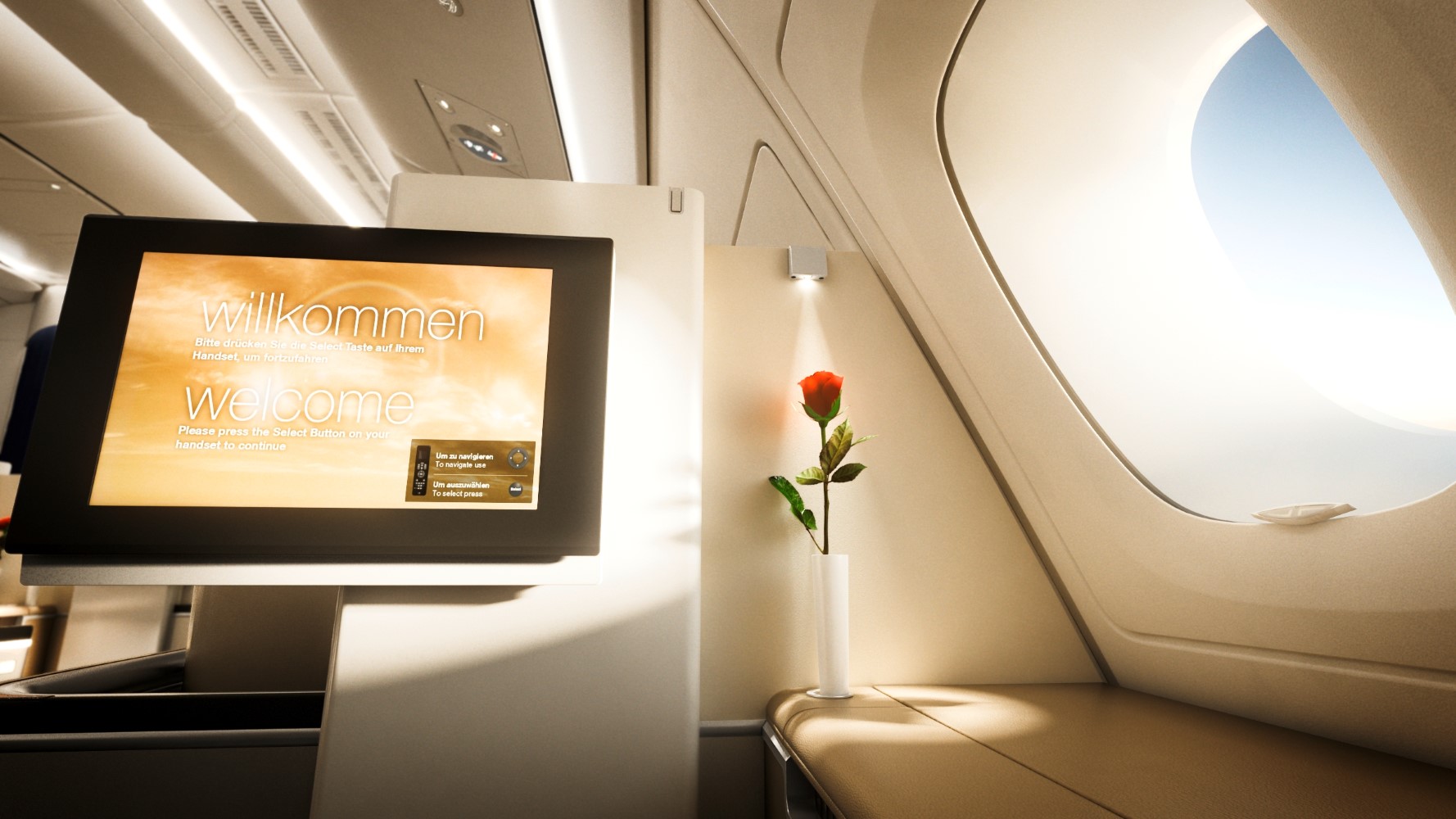 I’ve also seen roses as a nosegay-style bouquet in the “atrium” of business class of the Qatar Airways A350 and in promotional photos of Singapore Airlines’ Suites, their petals strewn on the Givenchy sheets of the seats-turned-beds. For the latter, the selling of the coupled Suite seats for honeymoons and other intimate occasions is obvious. The roses, in these cases, are almost a requirement, paired as they stereotypically are with champagne and strawberries for the “proper” expression of romantic love.

The orchid is a favorite of many airlines, also found at seats in Cathay Pacific’s premium classes, in tiny sprays in Emirates First Class, and even keeping Singapore Airlines’ L’Occitane toiletries company in the lavatories.

Without exception purple is the color of choice, and Interflora’s description clues us in to the language of the hue: “Purple flowers often represent royalty, respect, admiration and dignity and the same is true for purple orchids. These stunning blooms are ideal to show someone that you admire them and have respect for them.” The use of a purple flower in an aircraft cabin is, therefore, a wordless way of showing respect and honor to the guest. Orchids are also the national flowers of both Singapore and Hong Kong. In the latter, it’s the purple and white Bauhinia orchid, which even forms the logo for Hong Kong Airlines. 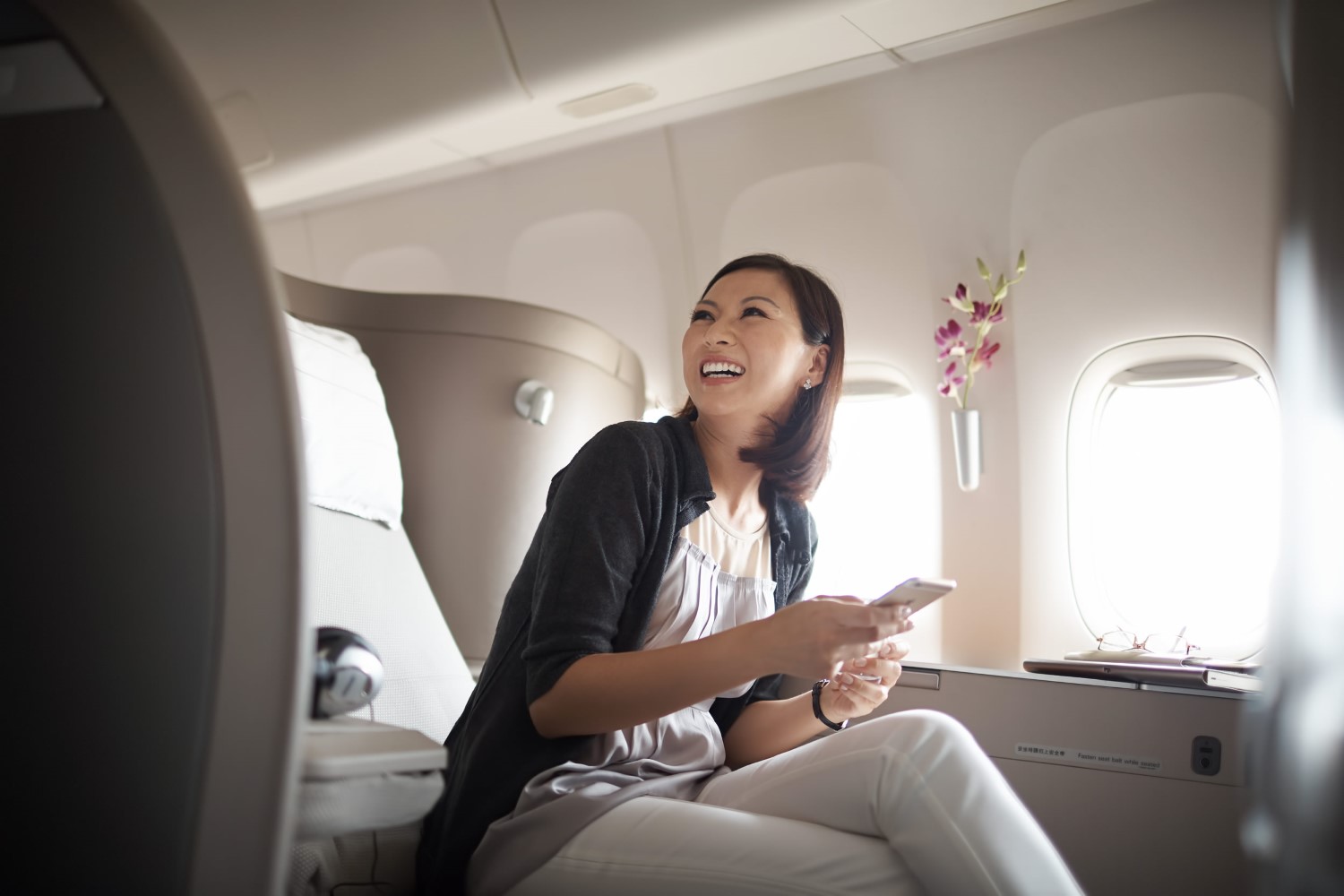 Touting their Royal First cabin, Thai Airways notes its inspiration in traditional Thai hospitality: “Wherever you are flying, savour Thai-inspired elegance with exclusive interiors weaving together ultra luxe contemporary hospitality design, traditional motifs and textures, divine comfort and surprising innovations and service touches.” Travelers who have visited Thailand will know the ubiquity of orchids in hospitality. In a hotel room, for instance, they are placed on pillows, on towels, in amenity displays, and even found floating in the water of the toilet bowl. At restaurants, they might garnish a plate or perch on the rim of a cocktail. The airline similarly spreads the flowers throughout the cabin, presenting them in small bouquets on the side table at each seat, on trays delivering any requested items to guests, and as corsages as part of the flight attendant uniform. The airline even named its frequent flyer program, Royal Orchid Plus, after the bloom.

Perhaps no airline incorporates flora into their brand so comprehensively as Hawaiian Airlines. The Hawaiian Airlines’ logo, affectionately known as “Pualani” (Flower of the Sky), has been the corporate symbol of the airline since October 1973 and every Hawaiian aircraft tail depicts her wearing an orange hibiscus flower in her hair.

Mirroring Pualani, Hawaiian Airlines flight attendants are encouraged to pin flowers in their own hair, though the flower choice switches to the yellow plumeria. It’s a strategic choice; this shade of the flower tends to last the longest when cut, a durability that works well on Hawaiian’s lengthy flight routes. I once asked a member of Hawaiian’s cabin crew if the flowers are handed out during the crew briefing before each flight. She replied that she simply picks them from her yard and, if she’s on a long trip and not originating in Hawaii, a faux flower clip is an acceptable stand-in. So tied is it to the brand and the complete look of the uniform that she thinks ahead to guarantee that she’s never without one, real or fake. 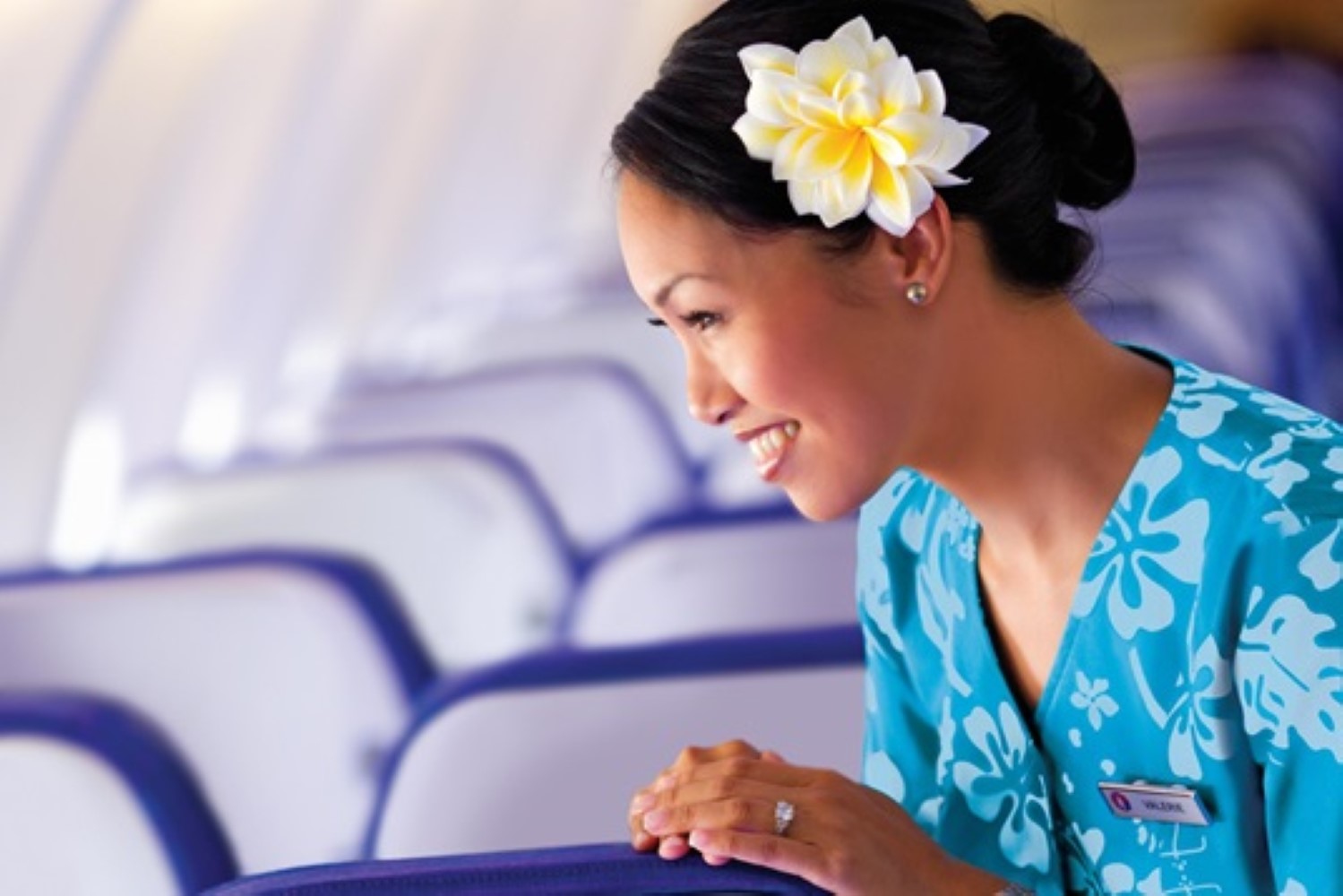 Yellow plumeria is an iconic component of the Hawaiian Airlines look. Image: Hawaiian

The debut this week of the airline’s fresh flight attendant uniforms now adds yet another Hawaiian bloom to the airline’s repertoire: the lehua blossom. According to the press release, the lehua is a “native Hawaiian plant with many culturally symbolic meanings that is often used as adornments in hula or other ceremonies”. The design firm behind the uniforms, Sig Zane Kaiao, explains its significance: “The lehua truly is the symbol of the Hawaiian people. In all of our legends, myths and chants, the lehua is strong and prominent.” The lehua will not replace the yellow plumeria as the most popular hair flower for Hawaiian crew, however; that flower has proved the test of time (and flight hours). 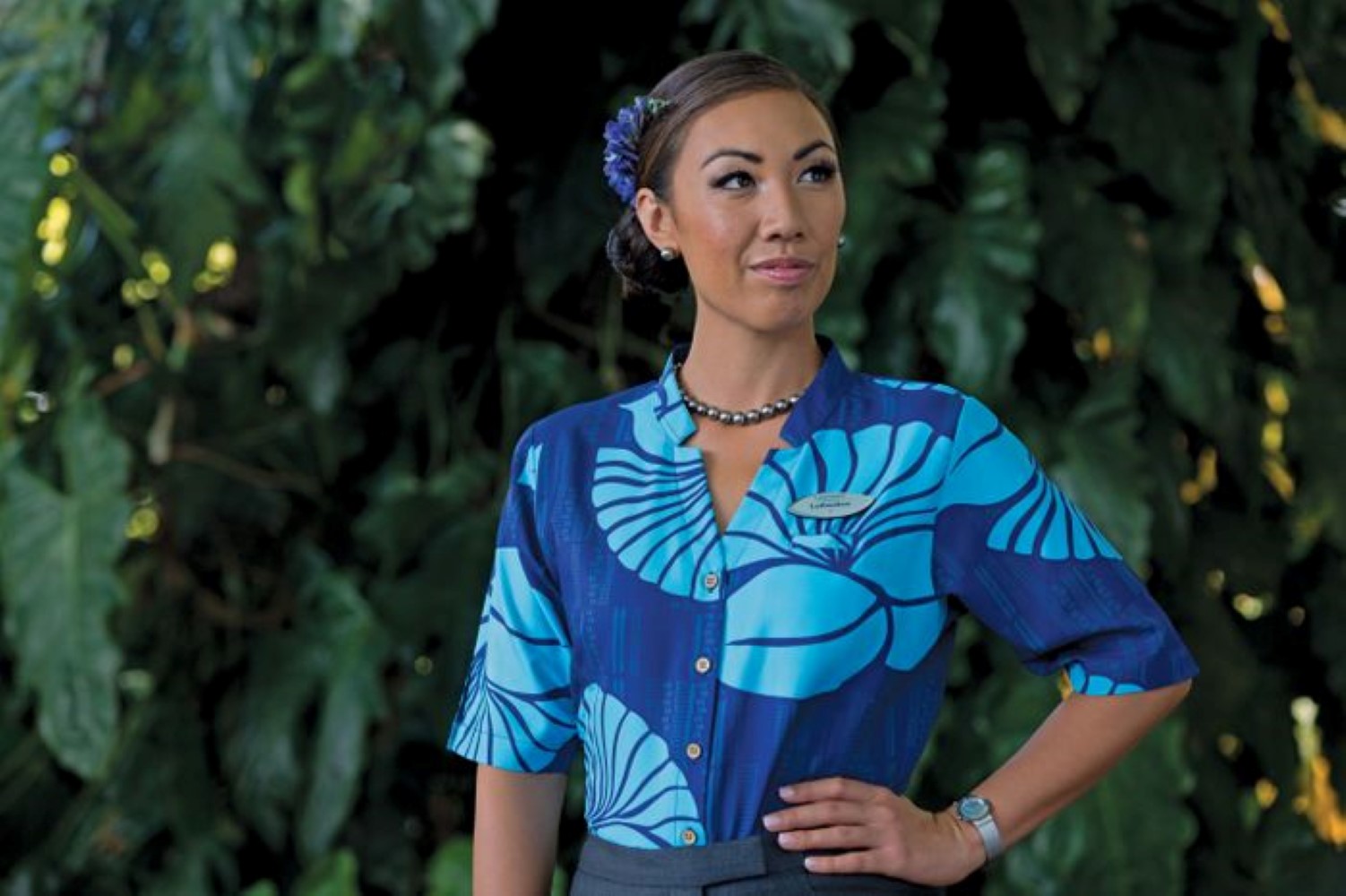 The Hawaiian lehua flower is incorporated into the airline’s new uniforms. Image: Hawaiian