Four years ago Thomas Cook Group, the world’s first packaged tours company and still one of the largest, decided to bring about change in a big way. The company brought its four airlines together towards a common goal: selling seats rather than packages. Fast forward to today and there are many signs of strong progress.

With coverage in Germany, the UK and Scandinavia there is massive competition for passengers. Thomas Cook operates a tourist-focused route network with less than daily, seasonal service across a mix of 95 aircraft, both single-aisle and widebody. The fleet includes Airbus A321s, Airbus A330s, Boeing 757s and Boeing 767s.

The German arm, born from Condor’s heritage, hubs long-haul in Frankfurt while the UK arm operates a number of flights from London Gatwick but sees the main long-haul operations centered in Manchester, England.

Despite its beginnings as a tour operator Thomas Cook now boasts a significant portion of sales in the flight-only category. For short-haul that number is at 45%, a modest showing and one which reflects the more competitive nature of those markets. In the long-haul arena the company is selling over 90% of its seats for flight-only. Getting there in just four years is an impressive achievement.

The group has eight A330s based in Manchester and a full maintenance base there as well, performing nearly all work up to C-checks for the Thomas Cook planes and also on a contract basis for other airlines. The facility was also responsible for a recently completed cabin interior modification project. During a visit to the hangar, your author was invited inside one of the A330s undergoing an A-check where I was able to explore the plane, try out the seats and even head downstairs for a bit.

The A330s are configured in a two-cabin layout but the company is very careful about names; the forward cabin is a premium economy product and is provisioned, marketed and priced as such. The premium economy cabin is arranged 2-3-2; its Zim seats are fitted with Zodiac RAVE embedded IFE screens, and foot-rests to improve passenger comfort. 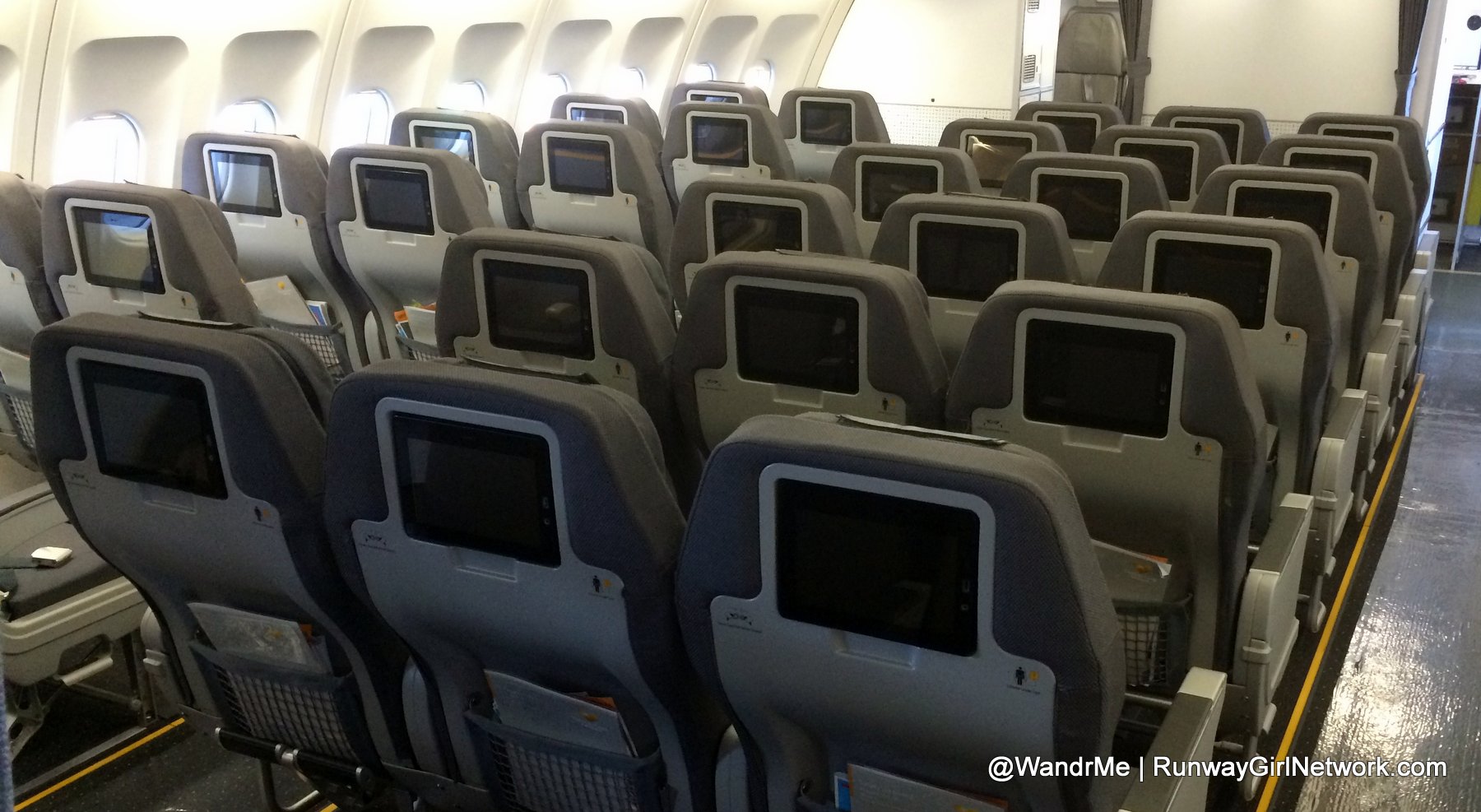 Most of the “extras” in the bundled premium economy product are things the carrier would stock on board anyways to facilitate its buy-on-board offering in economy class. This simplifies the logistics of offering the split cabin service but still allows for that premium experience to be delivered. It was explained as “trying to not have too much different [than economy], but we also don’t try to sell it as business class”. That distinction helps to keep the airline’s costs – and passenger fares – down. 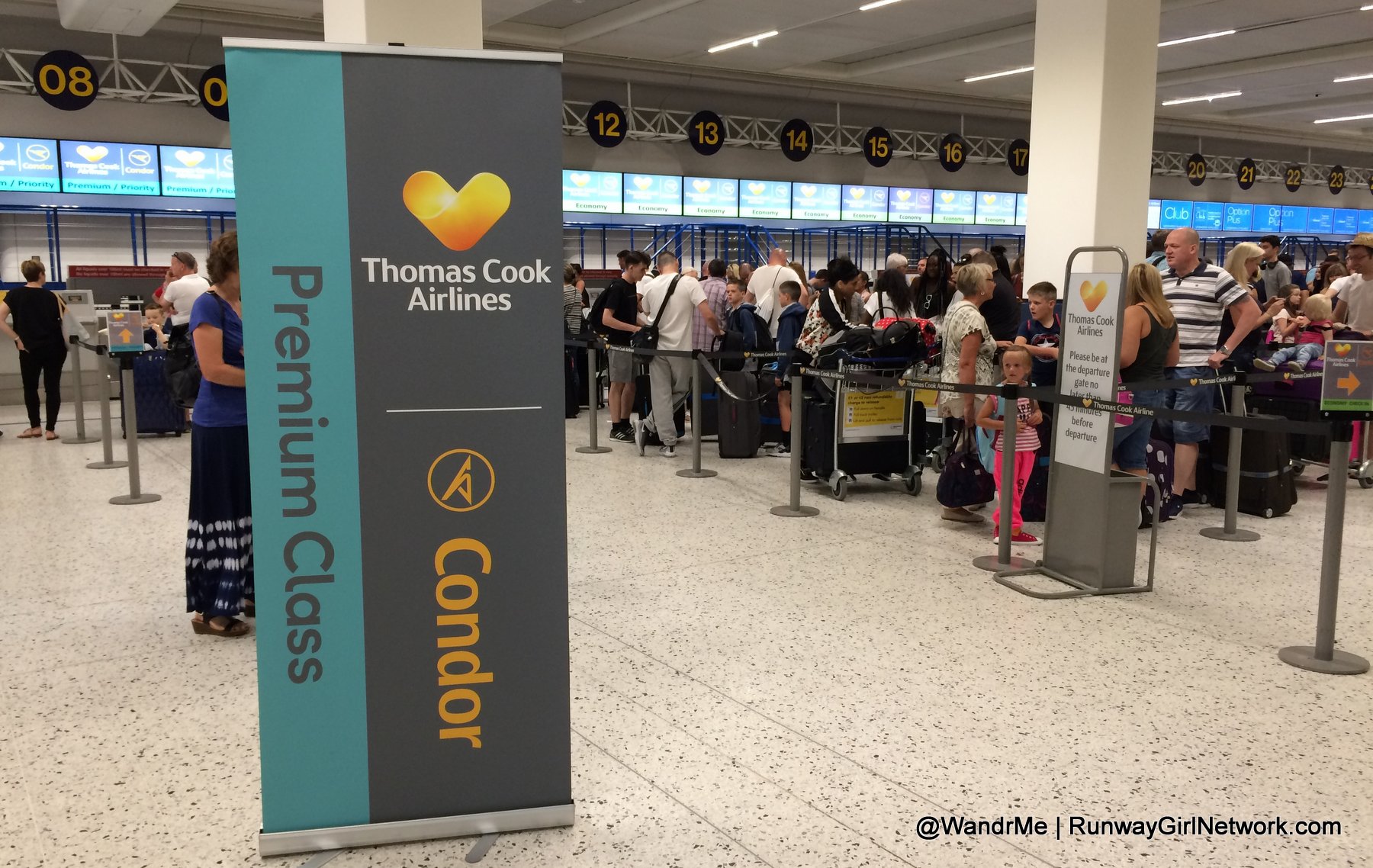 No wait in the “Premium Class” premium economy line for check-in on Thomas Cook in Manchester on this June afternoon. Economy class travelers were not so lucky.

A search for Thomas Cook premium economy this summer showed a $1,300 return trip price point for a week-long journey from Manchester to New York City compared to ~$2600 in business class on American Airlines or ~$900 in economy for either carrier. While American will sell travelers Main Cabin Extra (at ~$130 each way) on board its 767s plying the route, that’s only for extra legroom, not the other benefits. The pricing is “so good sometimes we wish we had more of it”, according to Thomas Cook’s Benjamin Todd, director of communications and my host for the tour. But, at least for now, the 49 seats in that section are all that’s on offer.

One could be forgiven for expecting an ultra-high density layout in the back of the plane. It is not unheard of – though still relatively uncommon – for LCCs and tour operators to choose an uber-tight 9-abreast layout on the A330 airframe. Thomas Cook chose not to do so, however, going with the standard 2-4-2 layout and 31″ pitch on its Acro economy class seats. They are a decidedly slimline product but with the 31″ pitch there is sufficient knee room that the personal space factor is on par with or better than many other long-haul economy products the company competes against. The RAVE IFE and meals are present but cost extra.

Squeezing more revenue out of the plane generally means more seats on board. One of the ways Thomas Cook accomplishes this on its A330s is with a lavatory module downstairs rather than on the main deck at the doors aft of the wings. This offers a more spacious lav setup for passengers and six to eight extra seats on board for the airline. Plus, getting to walk downstairs on a plane is just fun, at least for the #AvGeek passenger population. The downstairs lavs come at the expense of cargo container space in the belly of the plane but Thomas Cook doesn’t have that as a revenue stream so increasing seat count is a more effective use of the space.

With the growing long-haul LCC market (arguably led by Norwegian transatlantic) Thomas Cook has room to expand. New York City, Miami, Boston and Los Angeles are well established transatlantic routes for the company. Cape Town will be added in December 2016 and San Francisco joins the list for Summer 2017. Success is far from a sure thing. But the decreasing dependency on package deals, impressive fleet flexibility and the ability to serve leisure markets in a targeted manner are all working in the company’s favor of late. And as for the company’s history as the originator of package deals nearly two centuries ago, that was all about making sure people got to explore, a focus still in play today.