Qatar Airways announced another major aircraft order this week, indicating its intention to purchase as many as 100 Boeing planes slated for delivery into the next decade. The $18 billion deal (at list prices) allows Qatar Airways to continue its spectacular growth path, adding more routes and frequencies to its planned flight operations.

But the announcement ceremony in Washington DC was not just about new aircraft. Qatar Airways Group CEO Akbar Al Baker used the event to make pointed political and #PaxEx statements. And there were more than a few jabs taken at Airbus throughout the event, which was not particularly surprising given the aircraft delivery delays Qatar Airways has faced in recent months.

The announced deal includes firm orders for 10 777-300ER and 30 787-9 aircraft. The remaining 60 planes are represented by a Letter of Intent for purchase of 737 MAX 8 aircraft. These are the first single-aisle Boeing aircraft Qatar Airways will include in its fleet since it operated Boeing 727s a generation ago. The 737 MAX order is considered a slight to Airbus given delays in the A320neo deliveries that have plagued the company, mostly as a result of Pratt & Whitney engine issues. Qatar is a customer of the A320neo family, and Al Baker alluded to the challenges in his prepared remarks:

[Boeing] makes very high quality aircraft that I depend on. Qatar Airways is well-known in the airline industry for demanding nothing but perfection from aircraft manufacturers. This order reflects Boeing’s continued effort to meet and deliver aircraft in line with our exacting standards….The 737 MAX family of aircraft meet our needs and expectations for this segment of our network. There is no better endorsement of a company than to deepen our relationship which we are doing today with Boeing.

Al Baker insisted that the new 737 MAX LOI was about growing the fleet, not replacing the A320neo order. He specifically stated that Qatar Airways will “never renege on a contract commitment”, while also leaving open the possibility that some neos may not be delivered if Airbus is unable to meet its contracted delivery specifications for the type. “To mitigate our risk we have no alternative but to order the reliable 737 family of aircraft that will fuel our continued growth.”

The political nature of the event was underscored by the presence of Deputy Secretary of State Tony Blinken on the dais. His comments during the ceremony were brief but pointed, endorsing the Boeing product not because it is an American company but “because it is the best technology”. He also commented on the “ties of prosperity” that bind the US and Qatar together. Blinken specifically mentioned the outsized diplomatic and strategic role of Qatar and the military partnerships of the two countries. Al Baker explicitly denied that the recent F-15 fighter jet deal was part of the motivation for this commercial aircraft order though the optics of the situation continue to suggest otherwise.

As for the onboard product, the 777s are expected to show off the new business class seat which Al Baker has been teasing for nearly a year. That product’s unveiling is now delayed several months, from the fourth quarter of this year to the ITB trade show in the first quarter of 2017.  Among the reasons for the delay to the seat’s unveiling, said Al Baker, is a desire not to give competitors time to copy Qatar Airways.

AAB says delay is due to aircraft delivery delays and desire to not give competition time to copy. #PaxEx #AvGeek https://t.co/o8kZPEPiOe

For travelers in economy class, Qatar Airways’ well-reported shift to a 10-abreast layout on its current 777 fleet is a squeeze with no apparent relief in sight, including on the forthcoming new 777s. A company spokesperson maintained the position that Qatar’s economy class product is still better than many premium economy offerings, despite the cabin densification. Al Baker himself previously suggested that only aviation journalists notice narrower seats.

The new 777s are expected to join the Qatar Airways fleet starting in the second half of 2017 and the 737 MAX will follow in the first half of 2018.

"Boeing's competitors don't want me saying this, but inside they know this is true: Boeing makes the best airplanes." Closing from AAB.

Delivery of the 787s will begin in the second half of that year. Boeing Commercial Aircraft president Ray Conner noted that the timing of the new 777 deliveries is important to Boeing in keeping the operation of its current production line smooth, but he also acknowledged that the airframer may still need to reduce manufacturing rates to meet demand as it transitions to the 777X model towards the end of the decade. 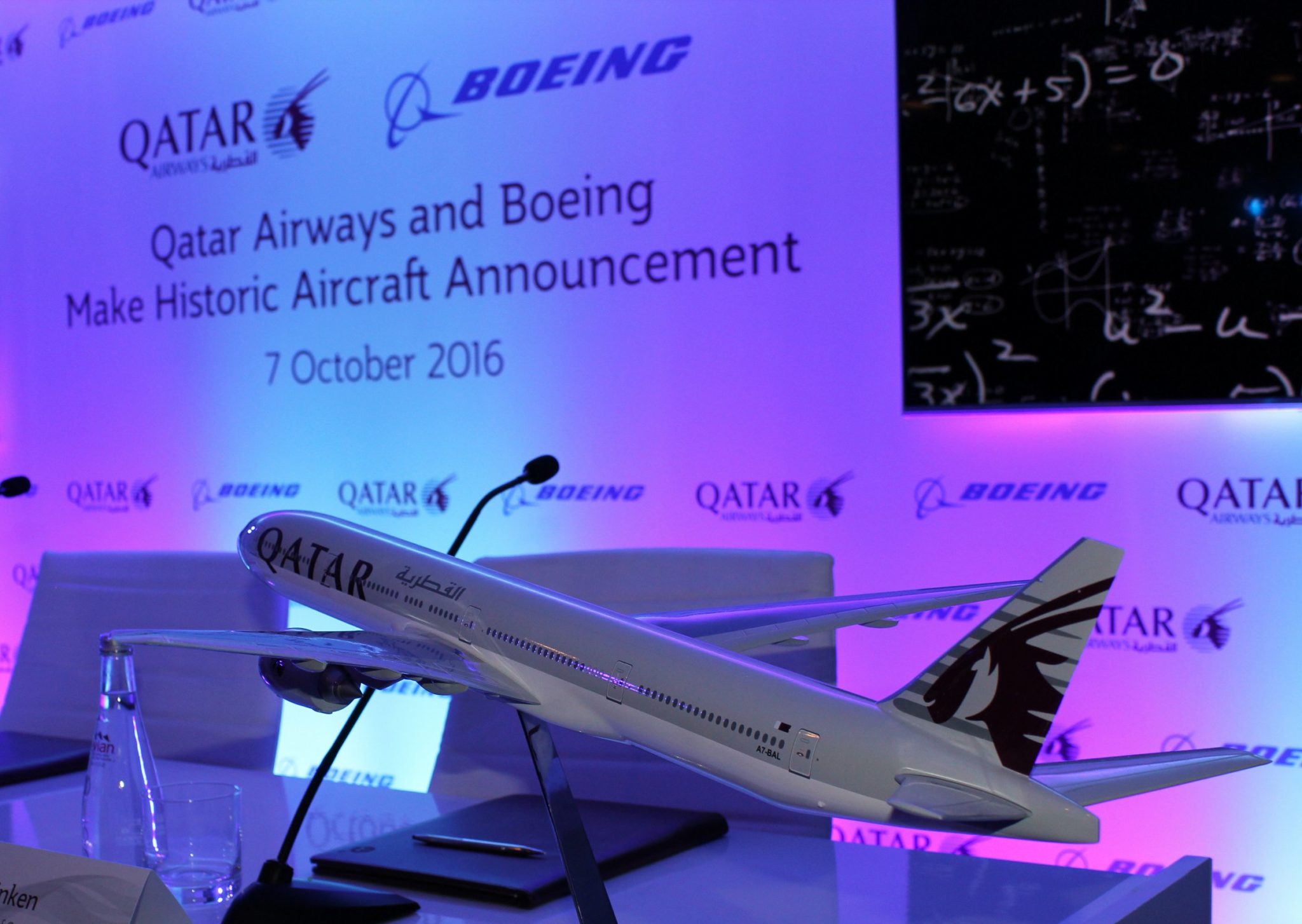 A Qatar Airways 777-300ER model at the order announcement ceremony.

The Huntsman: Winter’s War is so bad it’s good