Every inaugural flight is special; some inaugurals are more special than others. Last week JetBlue flew an Airbus A320 a mere 247 miles across the Straits of Florida, from Fort Lauderdale-Hollywood International Airport to Santa Clara’s Abel Santamaria International Airport in Cuba, restoring commercial flight connections between the two countries after 55 years. It was a tremendous celebration. And I was the first on board.

Festivities in Fort Lauderdale started early. The terminal was decked out with balloons and signs (and dozens of employees helping passengers find the correct lines). The gate area was stocked with a band, breakfast and cakes (on the AvGeek celebratory scale cupcakes top the ratings; there were plenty to be had pre-flight, including mojito-flavored icing on some). 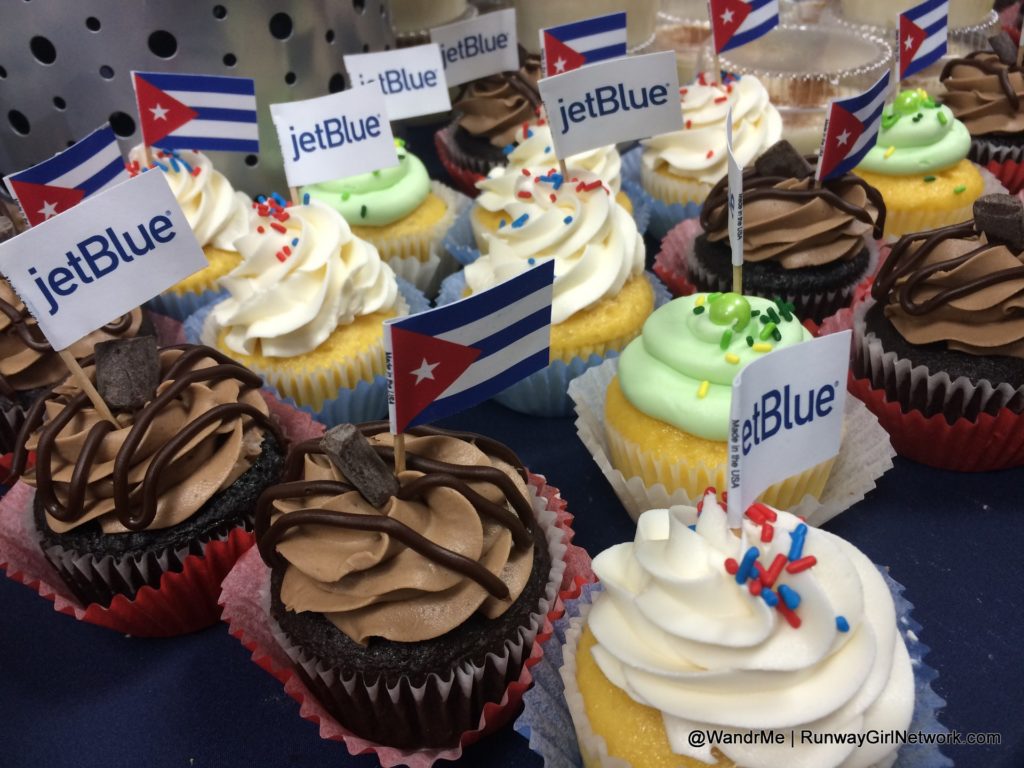 Speeches were made, as expected, with the airport authority and airline CEO represented. The special nature of this inaugural was reinforced when José Ramón Cabañas Rodríguez, Cuba’s Ambassador to the United States, joined the roster of speakers; the US Secretary of Transportation Anthony Foxx was also among the passengers.

While listening to the speeches – though mostly focusing on getting a(nother) pre-flight cupcake – I noticed that the gate display had changed to show “boarding” on the screen. It was still way too early for boarding to actually begin but I headed over anyways, mostly to acquire the requisite selfie.

As I stood there, off to the side of the main party, I realized that I was the first passenger in the boarding area. So did one of the photographers who asked if I was going to be the first to board the flight. That sure seemed like a good idea at the time and so there I was, suddenly the subject of a paparazzi display for which I was mostly unprepared. 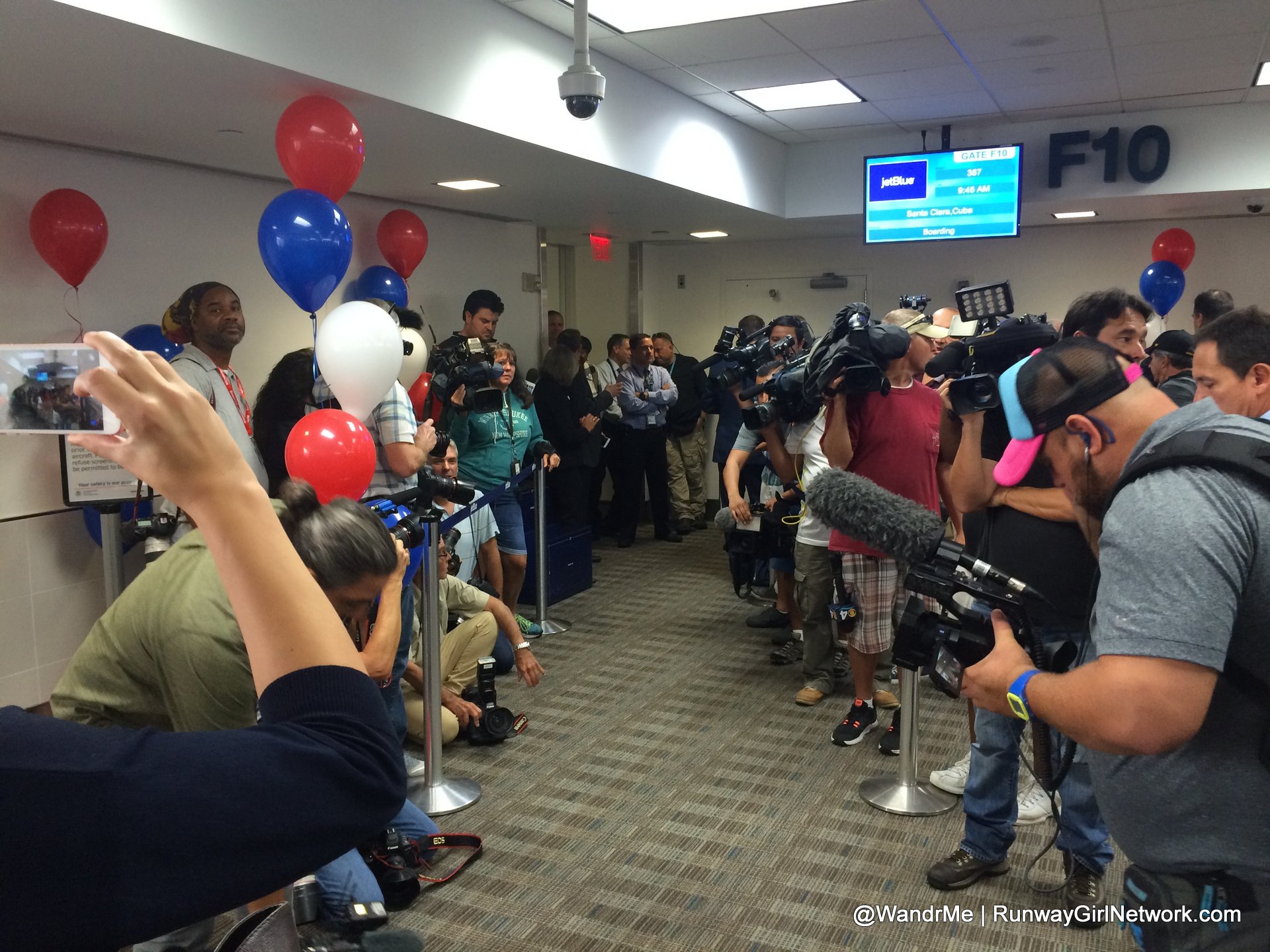 Media lined up for the boarding of JetBlue’s inaugural from Fort Lauderdale to Santa Clara. Image: Seth Miller

“Slow down.” “Turn around.” “Let’s go.” “Not yet!” I heard all of these remarks and more during the 15 seconds it took me to walk maybe 30 feet from the middle of the gate area to the counter. More photos were snapped while the gate agents made sure everything was working properly (spoiler alert: everything wasn’t working properly, and they later manually verified me on board just before closing the door).

As the rest of the 140 or so passengers boarded the A320, the party atmosphere migrated from the gate area to the aircraft. With far more media than usual, there was the jostling of camera gear into overhead bins and bodies into seats. A few last-minute non-rev passengers cleared into empty seats and the door closed behind them; it was time to fly!

Scores of JetBlue crew and media lined the taxiway as the plane headed out to the runway, under the traditional water salute from the local fire brigade. A relatively quick taxi and departure roll had us airborne and off the coast and headed south. The little bit of calm experienced during the taxi and take-off roll quickly subsided as seemingly everyone jumped out of their seats and into the aisles to snap photos and share stories of why they were part of the first flight. The most interesting of those stories was, to me, those of the five crewmembers working the trip.

All five had ties to Cuba, in one form or another. Captain Mark Luaces and First Officer Francisco Barreras are both descendants of Cuban-born parents who emigrated to the US; Barreras’ family has aviation ties back to the Pan Am station in Havana. The flight attendants, too, were all of Cuban descent. In a pre-flight conversation about the trip, a Cuban-born attendant asked me if I had ever been to Cuba. Having traveled there a year ago to fly on the IL-96, the answer was an easy “yes”. I asked the same of her and the response, “Not since our family left,” had a very different tone to it. Still, she shared in the excitement of the inaugural just the same.

Watching our progress on the inflight map for JetBlue’s inaugural from Fort Lauderdale to Santa Clara, the restoration of commercial service between the US and Cuba. Image: Seth Miller

Another flight attendant took to the PA just before departure with a message of hope and pride. He thanked all the crewmembers who “have been involved in this great moment to make this flight happen and all the future flights to normalize relations between both countries. We are really excited that this happened for Cubans and for the people of the United States as well. This will be a great moment for all of us and for the families in both countries. Thank you for being part of this and enjoy the flight.” I’m generally not a fan of extra announcements but this one, particularly coming from a flight attendant with ties to both countries and with the genuine emotion attached, was special.

More speeches were made on board – Secretary Foxx called the flight “[O]ne of the most tangible examples of what the President has charged us to do” – and then, just under an hour after departure, we were on the ground in Santa Clara, where seemingly half the city had come out to welcome us. The local bomberos offered up a water canon salute as we pulled off the runway in front of the terminal where airport employees, dignitaries and locals crowded around to be part of the historic moment.

Throughout the trip, I gave a couple of interviews; including a phone interview with the BBC after arriving in Cuba. Everyone asked why I wanted to be on the inaugural flight. I explained that I had closely monitored the changing relationship between the US and Cuba, and as an AvGeek had stalked the flight allocation process and booking options, because that’s my job. Booking the first flight just seemed like the right thing to do. It was an opportunity to be a part of history in a tangible way. I was among the first to book a ticket and was the first to have a seat assigned. Being first on board was just a small bonus on that.

Travel creates so many opportunities, allowing for exposure to other cultures and solving problems that seem to befuddle governments. To be part of that change was a once in a lifetime opportunity, well worth the price of admission.

And, yes, I know about the charter flight options or flying via a third country. That is all very different than what these new commercial flights open up for travelers in both countries. The progress towards normalized relations is a very, very strong message and one I’m proud to be a part of spreading. 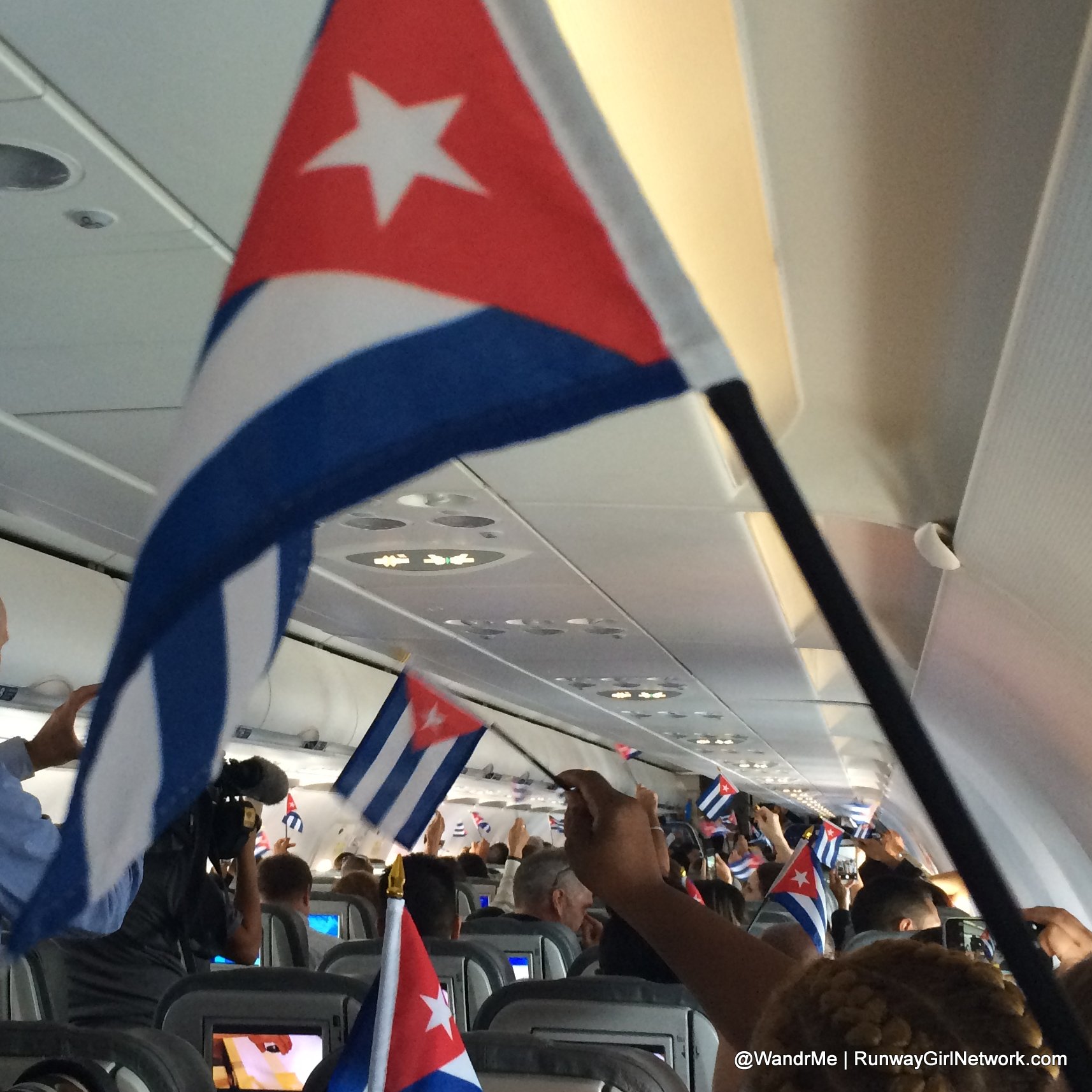 Cuban flags waved as we touched down in Santa Clara. Image: Seth Miller 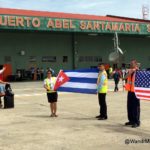 Greeted by the flags of the USA and Cuba following JetBlue’s inaugural from Fort Lauderdale to Santa Clara. 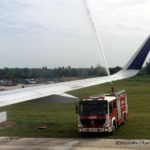 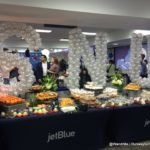 The gate area was decked out pre-flight for JetBlue’s inaugural from Fort Lauderdale to Santa Clara.