Perhaps American Airlines was too aggressive in chasing Delta. The carrier made a significant move last month, announcing that it would follow its rival’s lead and make its full catalog of inflight entertainment content free for all passengers on board. The new policy covered content on the in-seat screens and also American’s streaming media solution supported by the Gogo Vision platform. Specifically, American promised that customers would “have unrestricted access to the best and largest content library among the US carriers from their own device or seatback entertainment systems”. Alas, delivering on that promise has proven a leap too far for the company, at least for the immediate future.

When a recent trip on a Boeing 737 turned up zero free content for passengers – no in-seat IFE on that aircraft and no comp’d selections on the streaming system – the company was forced to answer for missing the mark. It acknowledges that the free content is not yet available across the fleet and offers a timeline for fixing that misstep. And the news for passengers is not especially good; getting to a full, free content catalog remains months away. The announcement page received an update (only after these complaints were logged): 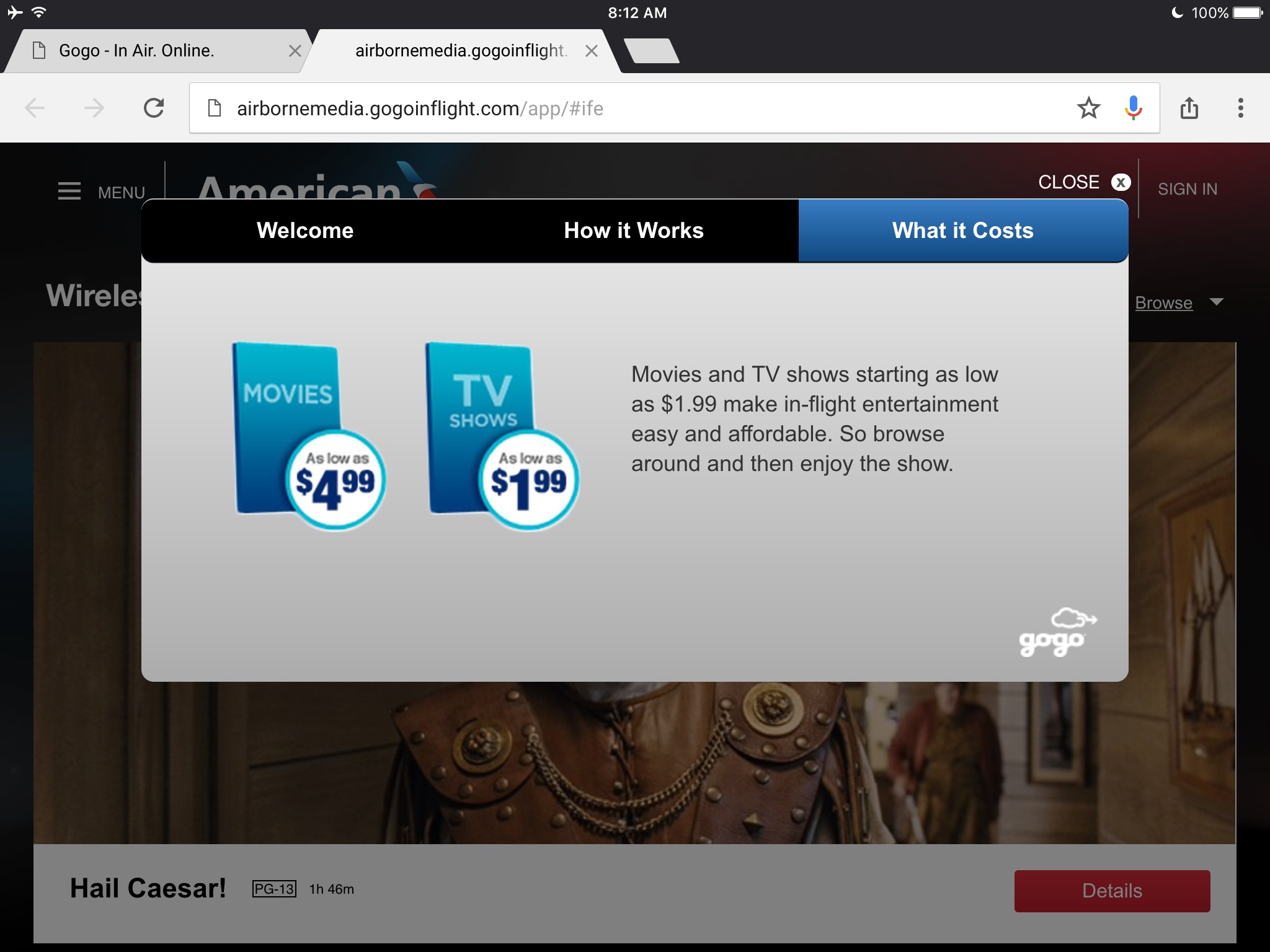 American Airlines promised unrestricted access to its IFE content for all passengers. It is citing technical challenges in failing to deliver.

The issue affects the legacy American fleets – 737s, S80s and 757s – according to company spokeswoman Leslie Scott. “The Tech Ops team is working on updating the content for wireless entertainment and expects to have all of it updated by October. After it has been successfully updated, there will be five free movies to choose from, not a completely free library (yet),” says Scott. While acknowledging the problem is a step in the right direction the resulting fix – only five free movies some two months after the announcement – begs questions about just what challenges American faces.

Converting from a paid to free model requires reloading the content library to the onboard streaming server. Presumably switching to a fully free model should only require one reload of the content with the pricing adjusted. But American’s approach is a two-step process, first to offer five free movies and then to move to a fully free library at some point in 2017. Scott explains, “Our August announcement underestimated the length of time it would take to load the fully free libraries to streaming wireless. So in the interim, we’ve added a handful of select free movies while we work toward the completely free library on streaming wireless.”

The carrier is familiar with at least a monthly content load cycle for its embedded IFE systems as those have been operating for years in many cases. And the logistics to supporting streaming IFE are not unknown to American. The company did not provide any further specifics as to why the content loading process is proceeding so slowly, though it appears that efforts to make some content free were already underway when the announcement was made to shift everything to free. And the operations side of the company is still playing catch-up on the first move, having not really started on the second.

@AmericanAir I'm on AA45. I thought entertainment was free now? I can't find a single free title on the @gogo system pic.twitter.com/2XvXfhKRm6

Separately, American also changed the layout of its website to no longer provide customers with a direct link to the media player app necessary to view the content. The carrier requires a dedicated app to access the streaming content rather than embedding the player in its primary app. The website detailing IFE options only provides a link to download the main app, a move which would leave passengers on board without the necessary software on their mobile device to support the streaming content.

Offering free IFE content should have been a big win, both for the company and its passengers. And maybe it will be at some point next year. For now, however, travelers on the older American aircraft should expect little if anything to be available for free.