The wait for the Mitsubishi Regional Jet has, again, grown a little longer. The company – which will perform the majority of its flight testing at Moses Lake, Washington – was scheduled to ferry the first airframe to the United States last weekend. Those plans were delayed on Saturday and again on Sunday due to a technical fault in the aircraft’s air management system.

In a statement issued on Sunday, the firm said only that the ferry flight will resume once the technical issue is resolved:

The MRJ (Mitsubishi Regional Jet) has started the ferry flight to the United States today, however we came to recognize that the monitoring function of the air management system needs to be inspected during the flight as yesterday. We then decided to return the aircraft to Nagoya Airfield.

We will decide the date to resume the ferry flight based on the results of inspection.

Obviously the additional delays to requisite flight testing are unfortunate for the company and for potential airline customers. But it is not yet clear what the impact will be on the longer-term plan for the MRJ or its success in the marketplace. And, at this point, a delay in certification might be a relatively small challenge for the company relative to other market pressures. The 70-90 seat regional jet market is more crowded than ever and Mitsubishi will find it difficult to stand out as a compelling competitor unless it can demonstrate dramatically different performance or passenger comfort than rivals.

Earlier this summer, the company made a cabin mock-up available to visitors at the Farnborough International Airshow and I spent some time exploring the space. I also spent time on several other test aircraft and mock-ups at the show. The MRJ offers a “typical” regional jet experience but it did not feel “special” to me. And that may prove its biggest hurdle to overcome from a #PaxEx standpoint, especially when the largest competitors were offering full-size aircraft to explore, not mock-ups. 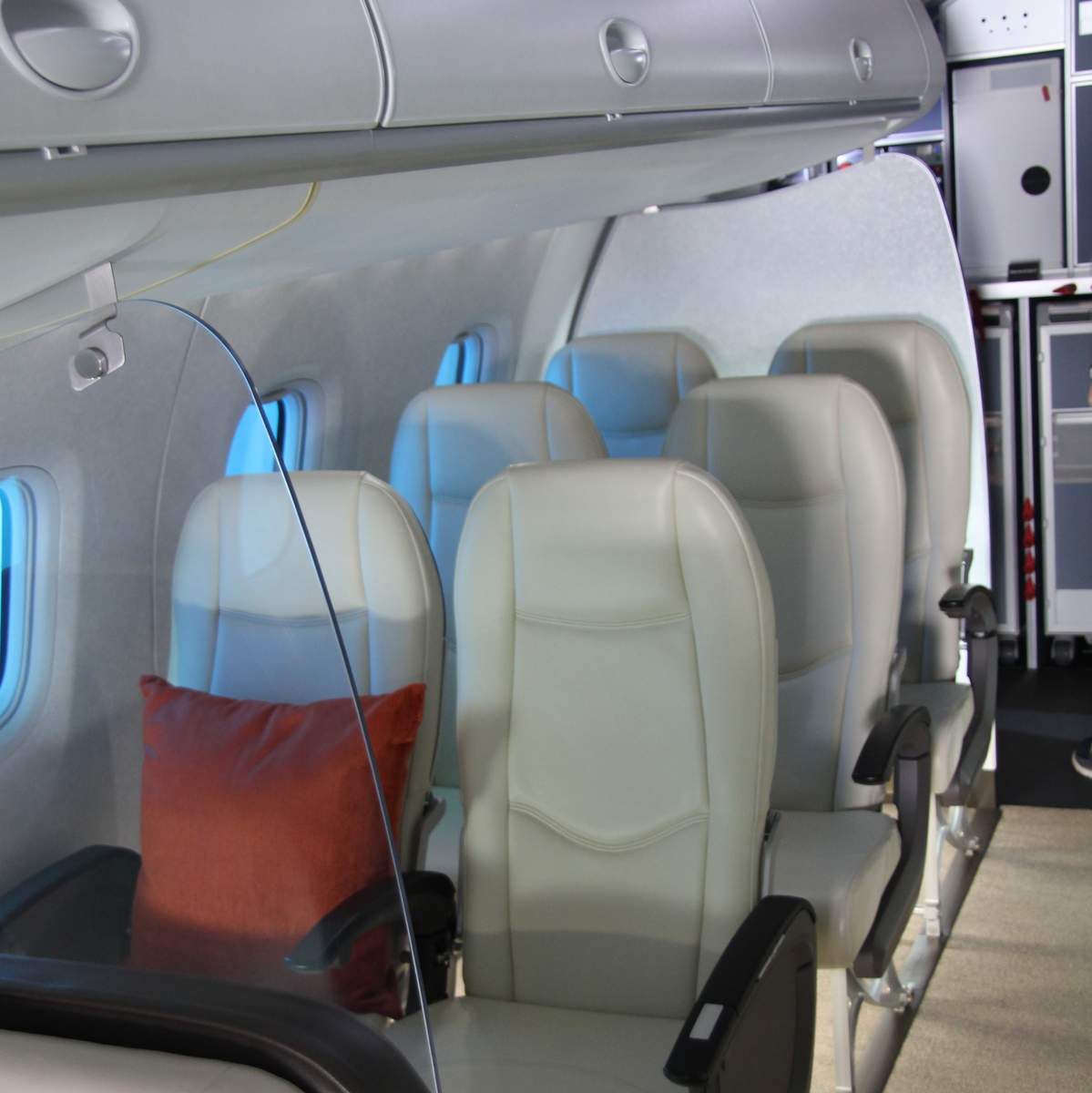 The seating layout on board is standard for its size: 1-2 in business class and 2-2 in coach. Cabin height is expected to be marginally taller and wider than the Embraer’s E2 series of RJs (arguably the dominant force in the segment today) but it was hard for me to judge in a mock-up seating environment.

The MRJ is smaller than the CSeries in passenger capacity so that’s not necessarily a fair comparison but the latter’s 2-3 coach configuration with wider seats overall – and even wider middle seats – is impressive. Embraer and Bombardier’s new-design aircraft also sport larger windows than what the MRJ mock-up showed. Larger windows certainly contribute to an overall feeling of openness and light in the cabin, which matters for passengers. 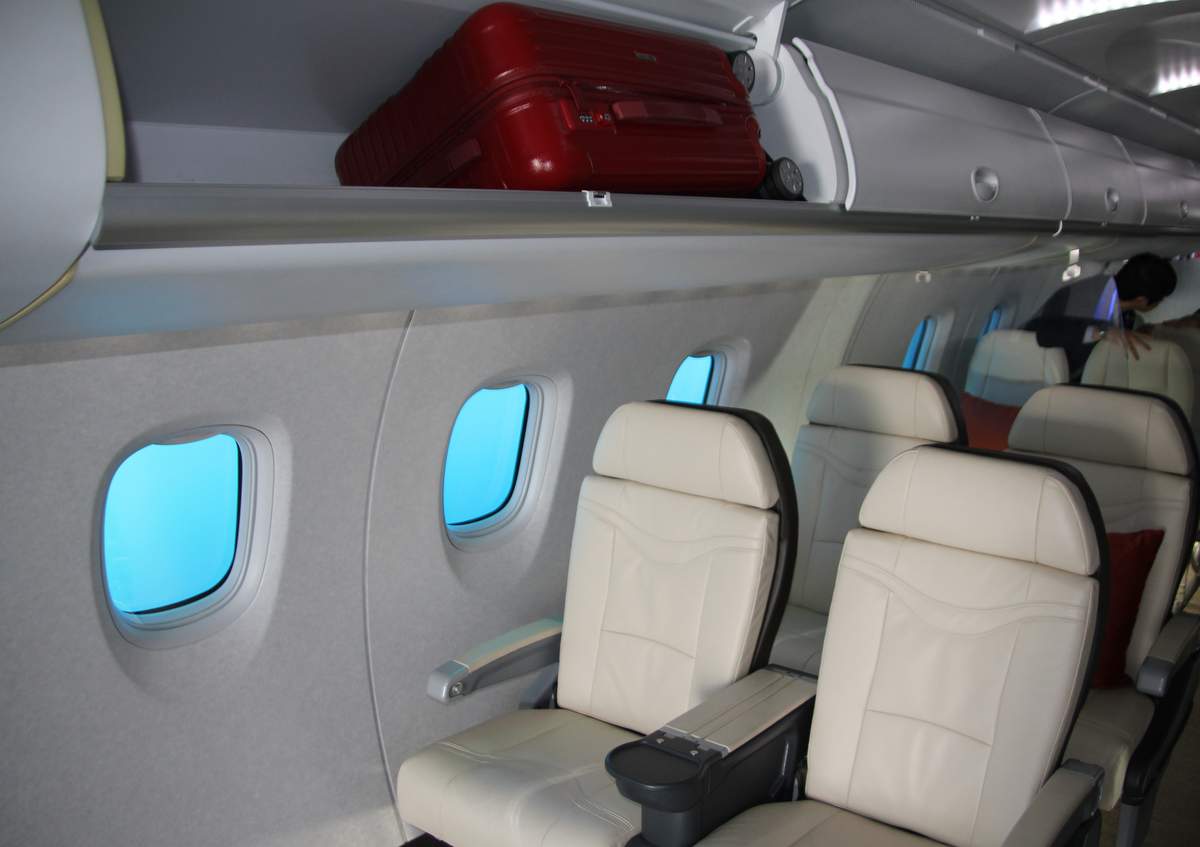 The overhead bins on the MRJ are another area where the new aircraft is consistent with the type of #PaxEx already seen on regional jets flying today – a normal carry-on bag fits in sideways, but, again, no compelling changes or improvements have been made.

From an operational perspective the performance specifications may also present challenges, with a longer runway requirement in many circumstances limiting the jet’s ability to operate in some of the smallest or most noise-sensitive airport environs.

The MRJ will also be heavier than the original design spec based on the need to trade out much of the planned carbon-fiber structure for aluminum. Now only 10-15% of the aircraft is carbon-fiber though Mitsubishi has managed to shave some weight since that decision was made.

The MRJ will have to compete on airframe price, dispatch reliability and operating costs, not to mention #PaxEx. And it will have to do so in a busier market than ever with major competitors Bombardier and Embraer joined by COMAC, Sukhoi and others vying for a shot at the market. It was already several years delayed and now even later given the most recent, indeterminate, delays.