Ghada Mohamed Al Rousi remembers the thrill and the adrenalin rush that came from riding a roller coaster as a small child. At the time, she had never given a thought to becoming a pilot, but once she set foot in a flight deck a few years ago, the thrill was back.

“When I first entered the cockpit I just felt ‘I can do it,” said Al Rousi, an Emirati who is a First Officer with Air Arabia. “Wanting to become a pilot was a feeling I didn’t necessarily feel when I was younger. It came a few years ago. But as soon as I felt that way it was always in my mind that I wanted to do a pilot training course.”

Air Arabia, a low-cost carrier based in the UAE, operates service to more than 100 destinations throughout the Middle East, North Africa, Asia and Europe with its fleet of Airbus A320s.

Becoming a pilot for women of other nationalities may be a bit easier than it is for Arab women, who come from a conservative culture, concedes Al Rousi. “I would say ‘don’t listen to the others, listen to yourself. It’s your life and your country will support you.’”

She believes that, in the world of aviation, people are growing increasingly supportive of women pilots. “I do think that there are still some minds that need to be changed,” she said, adding:

Simply the best way to change these minds is to get more women flying planes. Once women have a more visible presence flying planes, attitudes will start to change.

Boeing’s 2016 Pilot & Technician Outlook released in July outlines a need for 617,000 new pilots – about 31,000 per year – through 2035. This is an increase of about 11% over last year’s forecast with the largest increase in demand attributed to the Asia-Pacific region, followed by North America and Europe.

“Boeing is a big proponent of getting more women… into the aviation community overall, but certainly as pilots and technicians because of the need,” said Sherry Carbary, VP Flight Services at Boeing Commercial when the report was released. She noted that women pilots only represent six percent of the total pilot population so it’s a “huge opportunity”.

Al Rousi believes that women – who are grossly underrepresented in the field and other aviation professions – could help meet the forecasted demand for pilots in the coming years.

However, the path to the flight deck is challenging and requires hard work, stressed Al Rousi, who took an 18-month training program at Alpha Aviation Group.

“At the beginning, it was not easy because I knew there were a lot of people waiting for me to finish and to pass and not to be behind with my course,” she said. “So I was having to focus a lot. I was also away from my family for a while when I was doing the basic flight training in Greece.”

Al Rousi is First Officer with Air Arabia. She urges women to consider the pilot profession

Ground school was also demanding because students had to absorb “so much information in such a short time”, she said. “I was studying a lot and constantly thinking I had to pass.”

Upon graduation, Al Rousi took a short detour while waiting for her license. She went to the Dubai Air Show and to Bahrain on behalf of Air Arabia and Alpha Academy to do marketing and promote awareness of opportunities for women. She is a cheerleader of sorts, promoting the possibilities of aviation careers. There are also groups, such as the Arabian Section of the Ninety Nines that actively promote women in aviation in the region, she noted. 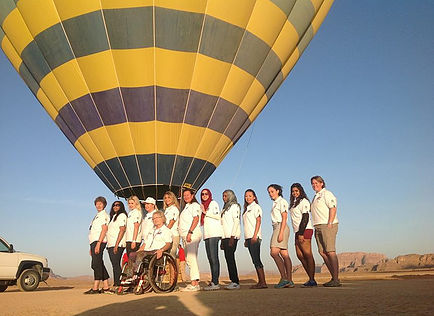 Fourth Annual Meeting of The Arabian Section of the 99s. Image: 99s

Al Rousi sees two ways to get more women to consider the pilot profession in the region: provide more opportunities to fly, and give women the confidence to believe that they can become good pilots.

“When you enter the cockpit, you are not thinking about anything else in the world. You are just thinking about your flight,” said Al Rousi. “Your mind is focused on doing your job which is to safely fly the aircraft. “For a few hours, you enter a different world where you only think about what you are doing. It’s an amazing feeling and I hope it is a feeling more women can experience.”

Why BizAv can expect bigger things with 2Ku commercial migration