Coming out of the recent EBACE show in Geneva there were few winners so obvious as the Dassault Falcon 8X. The new, three-engine jet completed its first flight in February 2015 and is expected to be fully certified later this summer to begin operations. Leading up to that expected certification were a number of milestones announced at the show which put the Falcon 8X in a strong position to perform well for customers going forward.

The most important bit of news was the announcement by Pratt & Whitney that the new PW307D engine received type certification from the European Aviation Safety Agency (EASA). This follows certifications from US and Canadian authorities, and puts the aircraft in a position to operate on a global basis.

The PW307D is the latest model based on the PW307A that powers Dassault’s Falcon 7X aircraft. The PW307D has a higher takeoff thrust, improved fuel burn performance and one of the best thrust-to-weight ratios available in its class. The new engine is a critical component of the Falcon 8X’s ability to serve its ultra-long-range missions. 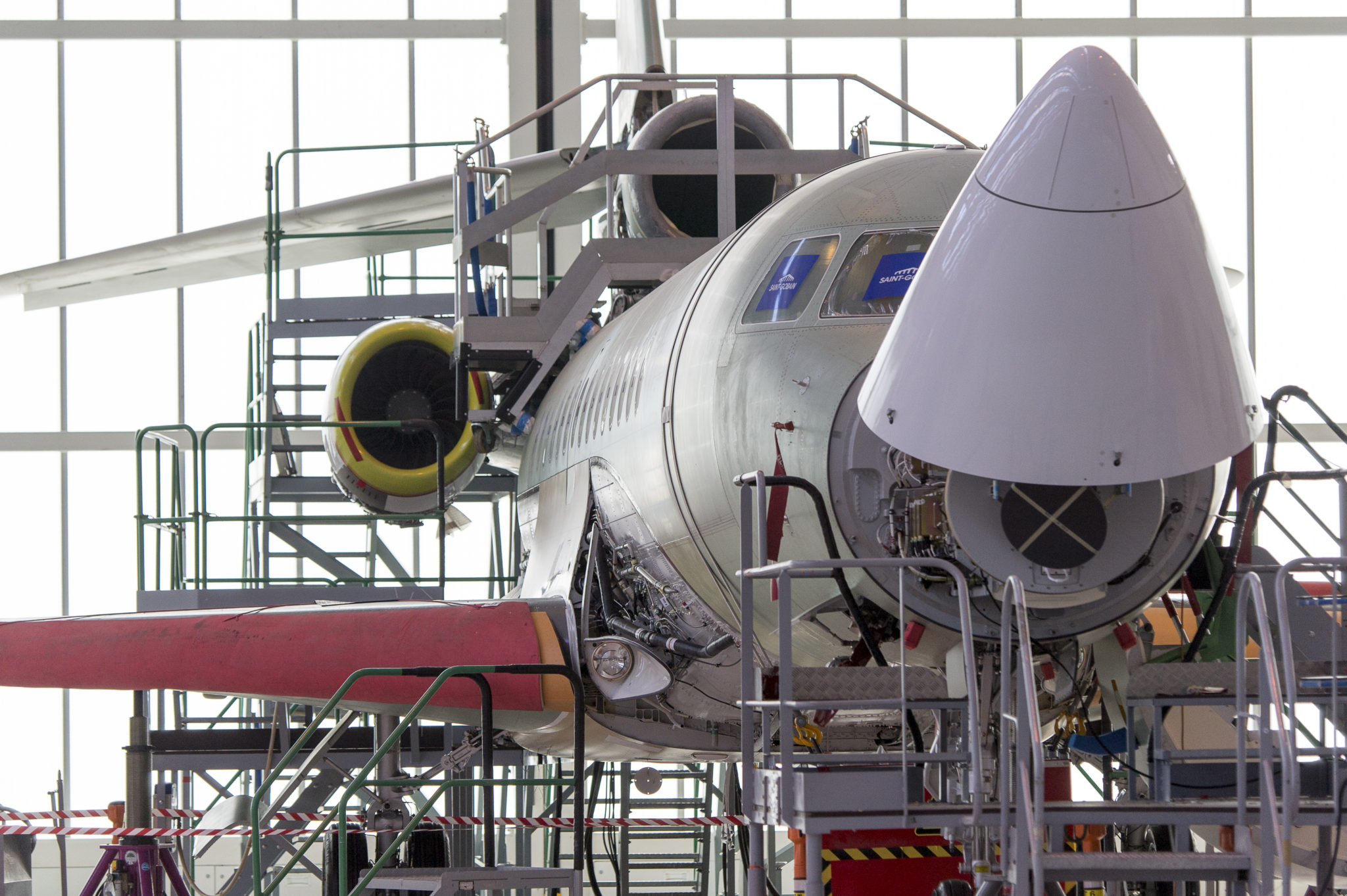 Engine of the Falcon 8X is the PW307d. Image: Dassault

Ensuring passenger comfort on board these longhaul flights is also essential. On that front, Dassault and ViaSat announced a deal during the show to offer ViaSat’s Ku-band connectivity service as an installed option on the 8X.

The arrangement will see the aircraft equipped with the ViaSat Mobile Terminal 1500 (VMT-1500-C) solution, including a Ku-band antenna, modem and antenna control unit. The cabin network will use a Satcom Direct Router (SDR) provided by ViaSat.

The solution will be supported by ViaSat’s Yonder network of contracted Ku-band capacity to provide a global footprint covering 90% of flight routes. Hardware installation and testing will begin mid-year and the companies expect to deliver an integrated solution to customers before the end of 2016. 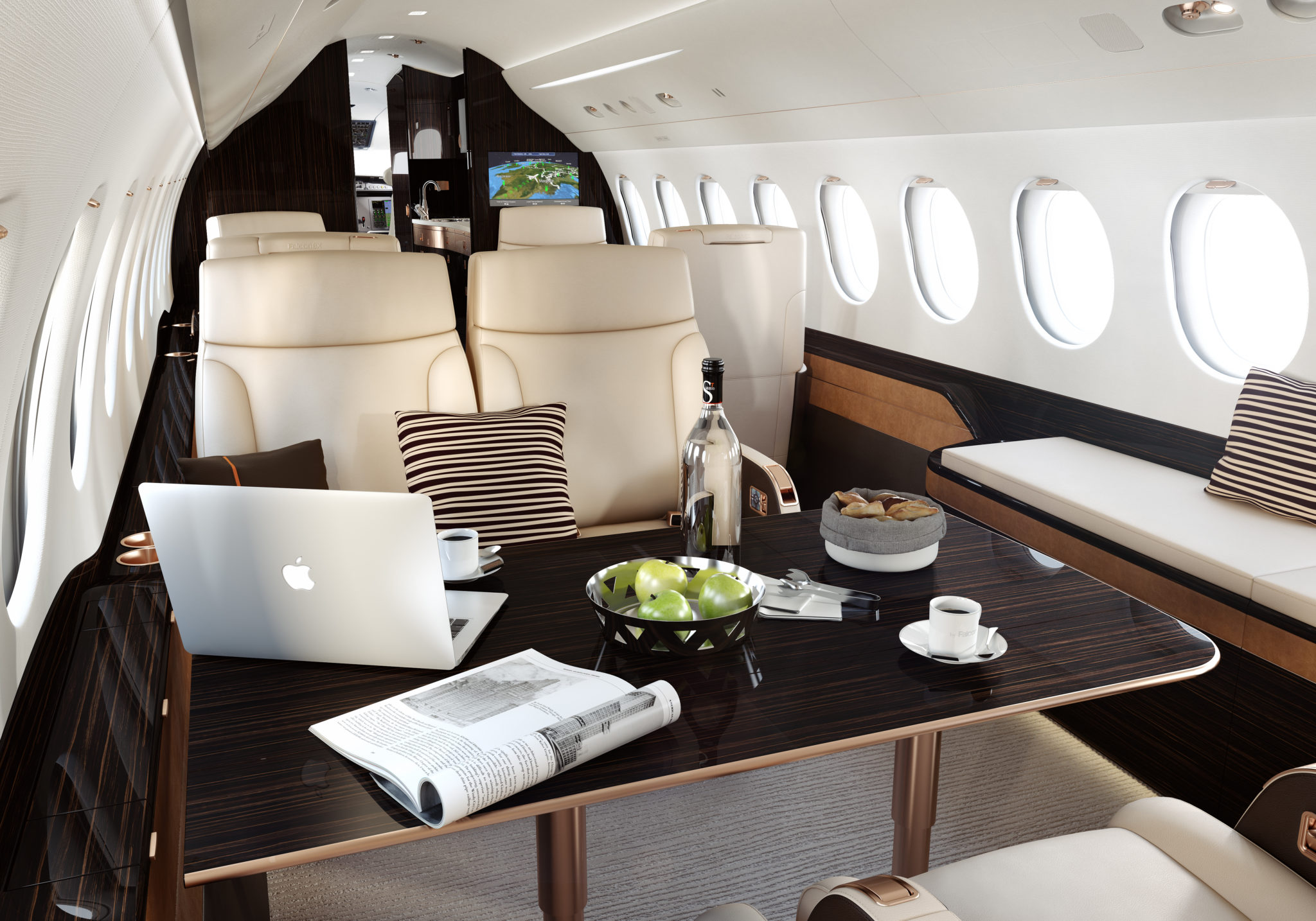 “There is a strong complement between Dassault Aviation’s Falcon brand, which is known for advanced technology and premier cabin amenities, and the ViaSat global connectivity system, which is recognized as an advanced broadband services platform delivering premier in-cabin connectivity experiences,” said Ken Peterman, ViaSat’s senior vice president and general manager in a statement. “By pairing our two organizations, we can deliver on a shared vision: making office-in-the-sky capabilities – with access to the real internet – a reality that will benefit Falcon operators well into the future.”

And, while not specifically focused on the Falcon 8X, multiple vendors were bullish on the Inmarsat Jet ConneX (JX) solution during the show. This is bizav’s cousin to the Global Xpress (GX) product which Inmarsat markets to commercial aircraft. JX uses Inmarsat’s I-5 global constellation of Ka-band satellites to provide high-speed connectivity. The onboard hardware for that service has received STC on the Bombardier Global 5000 and 6000 aircraft, as well as the Boeing 757 and more recently the Airbus A320 family. Terminal unit provider Honeywell continues to push forward with certification on other aircraft types. So we’ll hear more news in the coming weeks and months.

Expect to see the Falcon 8X start deliveries imminently. The company just began assembly of ship 21 at its factory in Bordeaux and there are multiple frames at the Jet Completion Center in Little Rock undergoing final configurations and fittings.

Gimme all your bandwidth, Qatar Airways