Solar Impulse’s remarkable round-the-world journey is in its final stages, as the world’s first fully connected aircraft completes its Atlantic crossing and heads for a landing in Seville. The Solar Impulse adventure demonstrates not only the potential for solar-powered flight and clean, eco-friendly technologies, but also the incredible advances being made in ground-to-air connectivity.

SITAONAIR has been involved in the Solar Impulse project from its earliest stages and joins prestigious industrial and scientific partners including Schindler, Omega, ABB, Google, Bayer, Altran, Moët-Hennessy and Swisscom.

As a Specialized Partner and hand-in-hand with Swisscom, the Swiss national operator, SITAONAIR provides Solar Impulse with Broadband satellite technology for real-time pilot voice and data communications, and a specially-designed ground infrastructure to assure global air-to-ground communications for the aircraft whenever and wherever it flies.

The connectivity provided by SITAONAIR also allows the Solar Impulse team to track and monitor the aircraft in real-time, and gives them access to real-time weather updates, which has been so crucial to the round-the-world journey, not least during the Atlantic crossing, when weather conditions and turbulence were expected to be particularly challenging.

In addition, this connectivity gives the Solar Impulse team access to real-time biometrics data, so they can monitor the health and well-being of the pilot – either Bertrand Piccard or Andre Borschberg – while he is in the air. This has been a particularly valuable feature during the longer legs of the journey, including the five-day Pacific crossing, and the journey across the Atlantic.

The connectivity being demonstrated on Solar Impulse will also have future applications for passenger flight – with similar versions of many of the devices being used onboard also available to commercial airlines through SITAONAIR’s operational and inflight product bases.

He says: “When the pilot boards the aircraft, he knows he is fully connected to every facet of his journey. He has the absolute certainty that his team on the ground will monitor his progress and report real-time flight conditions.”

Since beginning its journey in Abu Dhabi last year, Solar Impulse has travelled to Oman, India, China, Japan and across the United States. Its latest leg has seen it leave New York to cross the Atlantic, where it is due to stop over in southern Europe or North Africa, depending on conditions, before returning to Abu Dhabi.

The connectivity provided by SITAONAIR has helped Solar Impulse to capture the imagination of people across the globe, allowing them to experience the flights in real-time via a video stream and messaging on social networks. These videos, including one taken from outside the cockpit by Bertrand using a selfie stick, have attracted global press coverage.

At the beginning of the project, achieving full nose-to-tail connectivity on an aircraft with strict restraints on weight and energy usage – at 2.3 tonnes, Solar Impulse weighs roughly the same as a car, despite being the size of a commercial airliner – would have seemed to many an impossibility, much like the concept of solar-powered flight itself.

Greg says: “Today, it seems remarkable, but a few years ago it was considered wishful thinking.”

For Greg, however, what is most significant about what Solar Impulse and SITAONAIR have achieved together is how it has captured the spirit of innovation. Over the past few years, SITAONAIR has been awarded several prizes for its pioneering spirit and been recognized by CNBC as one of Europe’s most creative companies.

While it remains to be seen if and when solar-powered commercial flights will become a reality, many of the innovations that have made Solar Impulse possible – for example the development of lightweight communications solutions that minimise energy usage on board the aircraft – have potential benefits for today’s commercial aviation sector.

SITAONAIR’s involvement in the project demonstrates its continued commitment to innovation. Its suite of products is enabling commercial airlines to realize value and full potential from connectivity. These products are contributing to the digital transformation of the cockpit, improving operational efficiency, airline safety and the passenger experience.

“We are always focussed on innovation,” says Greg. “Back in 2010, we were one of the first companies to offer passengers the opportunity to make phone calls during a flight, with our Mobile ONAIR product.

“Our involvement with Solar Impulse demonstrates that we are not just active in commercial airlines and VIP operators today; we are thinking about what can be achieved in the future.” 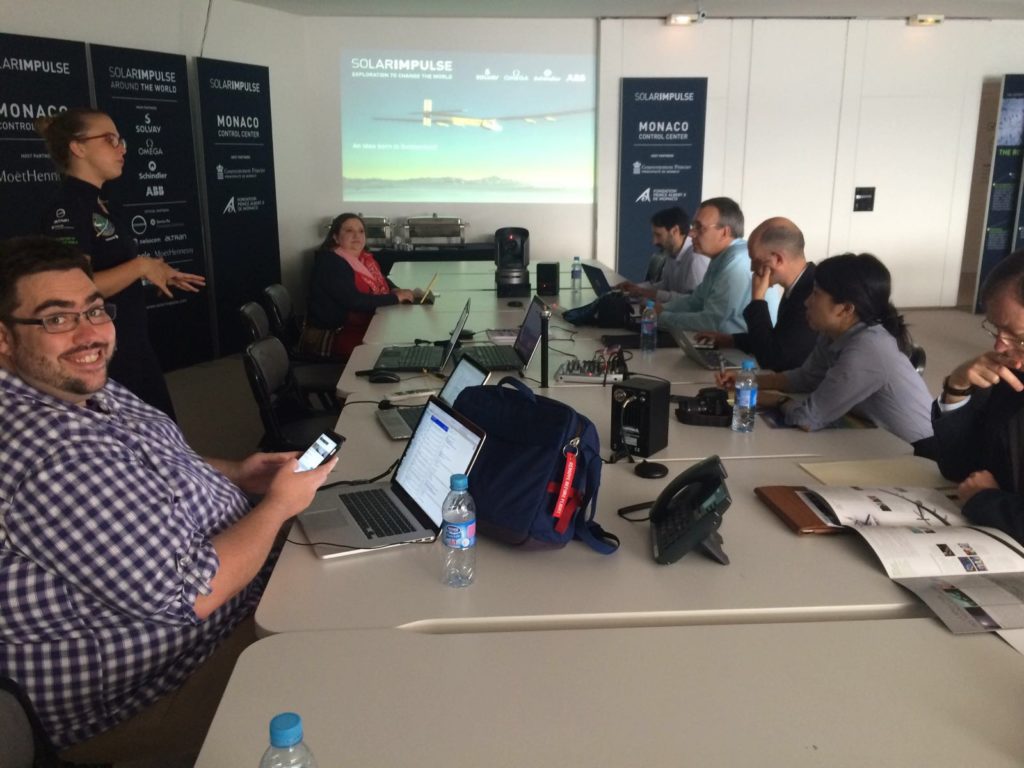 SITAONAIR is the e-Aircraft nose-to-tail solution line, providing the complete range of products and services an airline needs to realize the full potential of the connected aircraft. Its solutions enable airlines to personalize the passenger experience, streamline cabin and cockpit operations, and optimize maintenance procedures.

SITAONAIR looks at the big picture of how digitization is enabling airlines to benefit from connectivity. Its aim is to bring together its six key audiences – Passengers, Cabin crew, Cockpit crew, Aircraft data and maintenance, Flight operations, Air traffic control to transform the passenger experience and revolutionize airline operations.

SITAONAIR was launched on 1 January 2015 as part of the SITA Group. It has nearly 400 airline customers operating over 14,000 aircraft. It is headquartered in Geneva, and has offices in London, Paris, Montreal, Dubai Atlanta and Singapore, with 270 staff worldwide.