The recent acquisition of Emerging Markets Communications (EMC) by Global Eagle Entertainment (GEE) looks, at first blush, like a connectivity play similar to that made last year by Panasonic in buying ITC Global. Adding 1,600 shipping vessels carrying C- and Ku-band systems to GEE’s 700 Ku connectivity-fitted aircraft is a win on that front, especially in terms of capacity buying power. But Wale Adepoju, GEE’s Chief Commercial Officer, sees greater potential on the content side of the operation, bringing unique synergies to the market where GEE has advantages given its strong history in distribution.

Adepoju focused on the company’s role as content provider and CSP in a conversation with RGN, emphasizing the value proposition of meeting the needs of passengers and employees as best as possible, while generating potential incremental revenue for operators. And given the content distribution contracts (its own Entertainment in Motion, for one) and the products in GEE’s portfolio, such as the new Entice platform for streaming content distribution, the company believes that it can now lead the industry rather than just participate in it.

We’re not just in the business of connecting people to the Internet. Our business model is about getting a maximum engagement. If people want to access the Internet they can by a broadband method. If they don’t want to access, then we can use the Internet to deliver high quality entertainment to them or use that same connection to find out what’s going on onboard and provide useful intelligence to the operator.

The maritime portfolio from EMC is significant in size, but GEE’s initial goal is not about connecting those ships to the Internet (EMC already enables 3.4 million log-ins monthly on cruises and ferries alone). Says Adepoju: “When you look at the cruise ship industry, traditional media competed with the cruise’s ability to make money. Some of the tools we have makes you engage with the environment around you. We can offer multi-player games that include everyone on the ship. We can offer destination information, themed content based on the demographics on board and a deep library so that people are not bored.”

Commercial shipping is a massive potential market, one where EMC plays a small role and where the GEE now hopes to be a more active participant. “This isn’t just about people who are on cruises,” says Adepoju. “There’s a huge amount of commercial shipping vessels around the world. They all have a media demand, and legislation of welfare rules say that we’ve got to be able to give them access to native language media and to their families through connectivity. That market is underserved and we see a huge opportunity there. Our language skills help; we have a lot of Filipino programming in the company already. We have Indian, Sri Lankan. These are languages that have a major impact in the world of commercial shipping.”

Ultimately, however, Adepoju appears focused on changing the way GEE participates in the maritime market, regardless of segment, saying, “Rather than being a passive contributor we want to be an active innovator in that space and transform it.”

Stored content is only part of the company’s distribution plan. GEE also expects to take advantage of EMC technologies to improve the live content performance across its customer portfolio, including the aviation sector. EMC’s patented network acceleration technologies will allow for more efficient delivery of media across the satellite links, it says. In a world where real-time data transmission remains relatively expensive while consumers are demanding more real-time content, this is a necessity to ensure that GEE can remain competitive in the space. 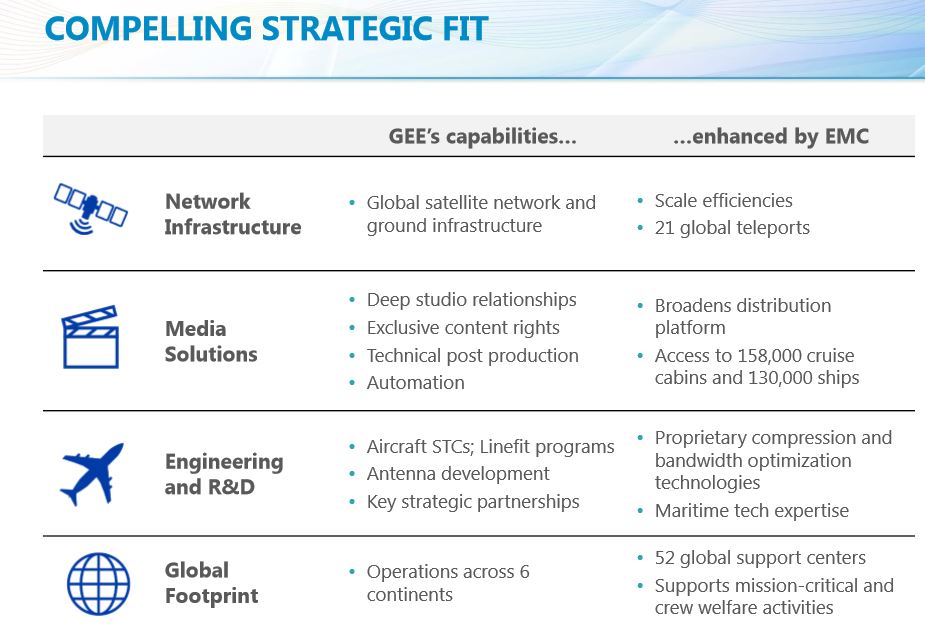 GEE and EMC complement each other. Image: GEE

While content is king in this EMC deal, the connectivity side is also valuable. Adepoju acknowledges that it was something of an inevitability that the consolidation would come about noting that, “We’re not trailblazing; we’re just doing what makes sense.” But this inevitability does lead to efficiencies in volume of data purchases and coverage. “We can get really good bandwidth to customers everywhere in the world; it does help us.… The deal gives us significant capabilities but it does not stop us from looking at and committing to more bandwidth going forward,” he says.

Though GEE confirms that EMC “currently provides services to 1,600 vessels, this includes both C-band and Ku-band systems”, it adds, “At this time EMC has not disclosed the number [of] ships per system.” Asked by RGN if GEE is working to deliver any new connectivity hardware to the maritime market or if it will sell EMC’s current kit going forward, a GEE spokeswoman said, “We haven’t announced any specific plans re the integration of our hardware yet.” 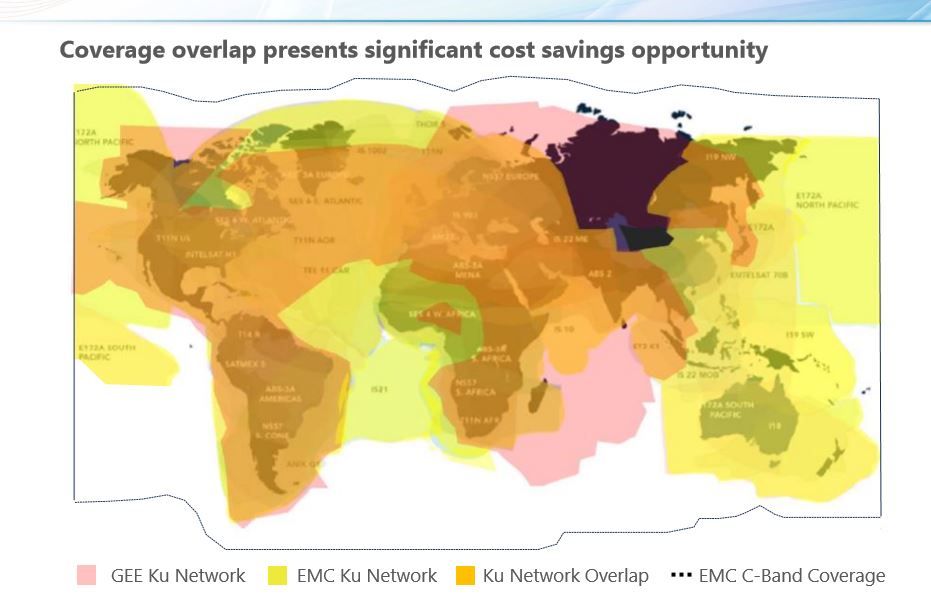 GEE’s biggest inflight entertainment and connectivity customer, Southwest Airlines, recently issued a RFP to study its connectivity options, as the competitive threat of ViaSat Ka-powered solutions on JetBlue and other carriers becomes apparent, and a reshaping of the US connectivity market is underway. By diversifying into maritime, GEE is mitigating the risk associated with relying solely on the aero market.

More broadly, GEE’s Adepoju believes further industry consolidation may be forthcoming, but says GEE is well positioned to benefit from any future mergers, noting, “There is consolidation that needs to happen for the business to make sense. We are in a unique position where we have the media services capability in-house. For us [the GEE/EMC merger] is a significant boost.”

See further details about the GEE/EMC transaction in the following presentation: GEE-EMC-transaction

RGN Premium: The deal priced, at a higher rate