President Barack Obama has signed the Women Airforce Service Pilot Arlington Inurnment Restoration Act after it passed unanimously in the US House of Representatives and was sent to him on 13 May. WASPs including Elaine Harmon, who died in April 2015 at the age of 95, will be allowed to have their ashes interred at Arlington National Cemetery.

Erin Miller, a lawyer in Maryland, is one of Harmon’s granddaughters and helped spearhead the effort to reverse a decision made in 2015 by then-Secretary of the Army John McHugh. He determined that WASPs should not have been allowed back in 2002 to have their ashes interred in Arlington.

“My grandmother was really patriotic and during World War II, she wanted to contribute to the war effort. She had a pilot license, which made her qualified for the WASPs,” said Miller. “Before becoming a WASP, she worked at a Ohio Army laboratory because she had a degree in bacteriology and was already supporting the war effort.” Harmon was in the second-to-last class of WASPs, she added. 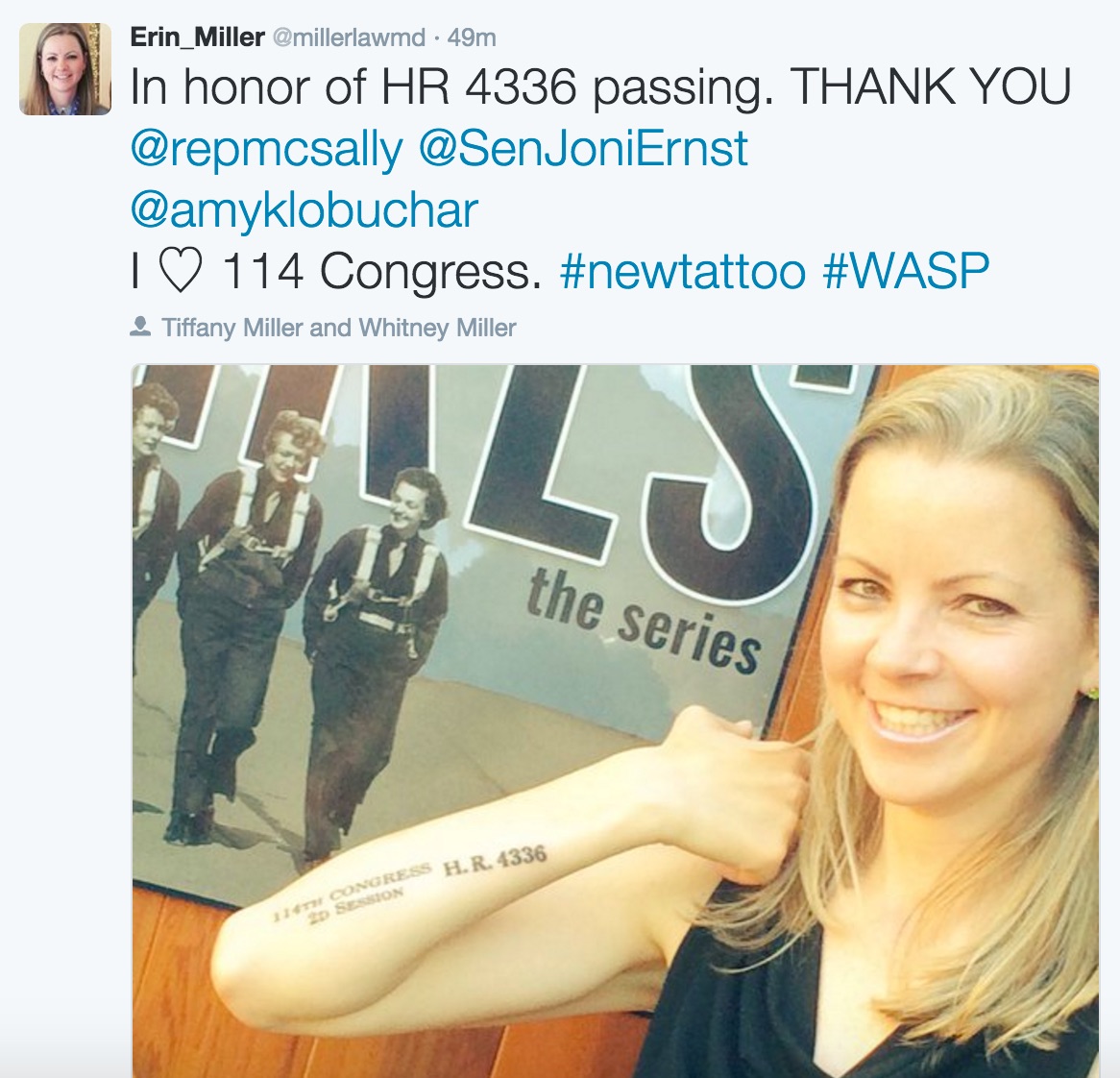 Erin Miller  showing her celebratory tattoo to recognize the passing of HR 4336.

Miller was surprised – but not really surprised – by the traction her family’s cause received from its Change.org petition, with nearly 200,000 signatures. “It’s always hard to say which ones will get attention. The WASPs were already known, especially after receiving the Congressional Gold Medal in 2009,” she said.

There were a mix of factors that contributed to the success of the petition campaign, said Miller. “I think my grandmother had a real story and the fact that she was first able to to be buried in Arlington, then the government bureaucracy changed its mind, really connected with people,” she said. “We also have relatives across the country that pushed the petition and my cousins in college got students involved. And Change.org got involved to further spread the word.”

Miller listed people and groups who helped get the bill passed in Congress including Rep. Martha McSally (R-Ariz.), who is also a retired Air Force colonel. “After doing several interviews about the petition, her staff found our stories and since she was personally involved with the WASPs during career, she wanted to help even though she didn’t know us and we weren’t from her district,” she said. “We also got support from the AOPA, the Air Force Association, the Military Officers Association of America, the Ninety-Nines, the American Association of University Women and the National Women’s Law Center.”

The petition also got support from a lot of museums, including the Pacific Aviation Museum Pearl Harbor in Hawaii, the National Museum of the United States Air Force in Ohio and Maryland’s College Park Aviation Museum, where Harmon’s papers are housed.

What would Harmon say about this victory? “On the one hand, she was disappointed that the Army denied the WASPs being interred in Arlington after fighting for it since the 1970s. She didn’t care for herself. She wanted that respect for all WASPs,” said Miller. “She’d also be proud that we fought on behalf of her and all the WASPs to get the recognition they deserved.”

Now that the bill is signed, Miller said her family will have a ceremony and formal funeral at Arlington National Cemetery. “I know my grandmother would not have wanted us to make a big fuss. But she was someone who always wrote thank-you notes,” she said. “And this ceremony will be our way to recognize and thank all the people who helped push for this change.”

Maggie Smith breathes fire into The Lady in the Van