In 2011, the Lufthansa Group set itself the goal of increasing the percentage of women in management positions by 30% by 2020. Since then, on a worldwide scale, the share of women in management positions at the Group has risen from 13.1% in 2010 to 15% in 2015. And while that might not seem like a huge increase, the fact that the 30% target has already been met by the Group’s Supervisory Board and that women now make up 40% of the Group Executive Board is definitely a huge step in the right direction.

The Lufthansa Group’s focus on providing a more balanced work environment for working parents of both genders, where professional achievements and a fulfilling family life are no longer mutually exclusive, is helping to set an industry standard. And the company believes its remarkable 83% increase in women pilots since 2005 is unparalleled in the world.

So it’s only fitting that the Lufthansa Group would choose to celebrate International Women’s Day (IWD) today in equally high-flying style. Honoring the achievements of women in aviation with the first ever gathering of four all-women Lufthansa Group flight crews on regularly scheduled inbound flights to JFK, Lufthansa hopes to shine a bright light on this year’s IWD theme of gender parity (#PledgeForParity).

“At Lufthansa Group we have a long tradition of furthering gender equality and equal professional opportunities for men and women. On the occasion of International Women’s Day we wanted to make a prominent statement to draw public attention to this fact and, even more importantly, to encourage young women to pursue non-traditional career choices,” says Meier. “Who would be better ambassadors to convey this message than our highly qualified female pilots? That’s when we had the idea to staff one New York service from each of our hub airports with an all women crew.” 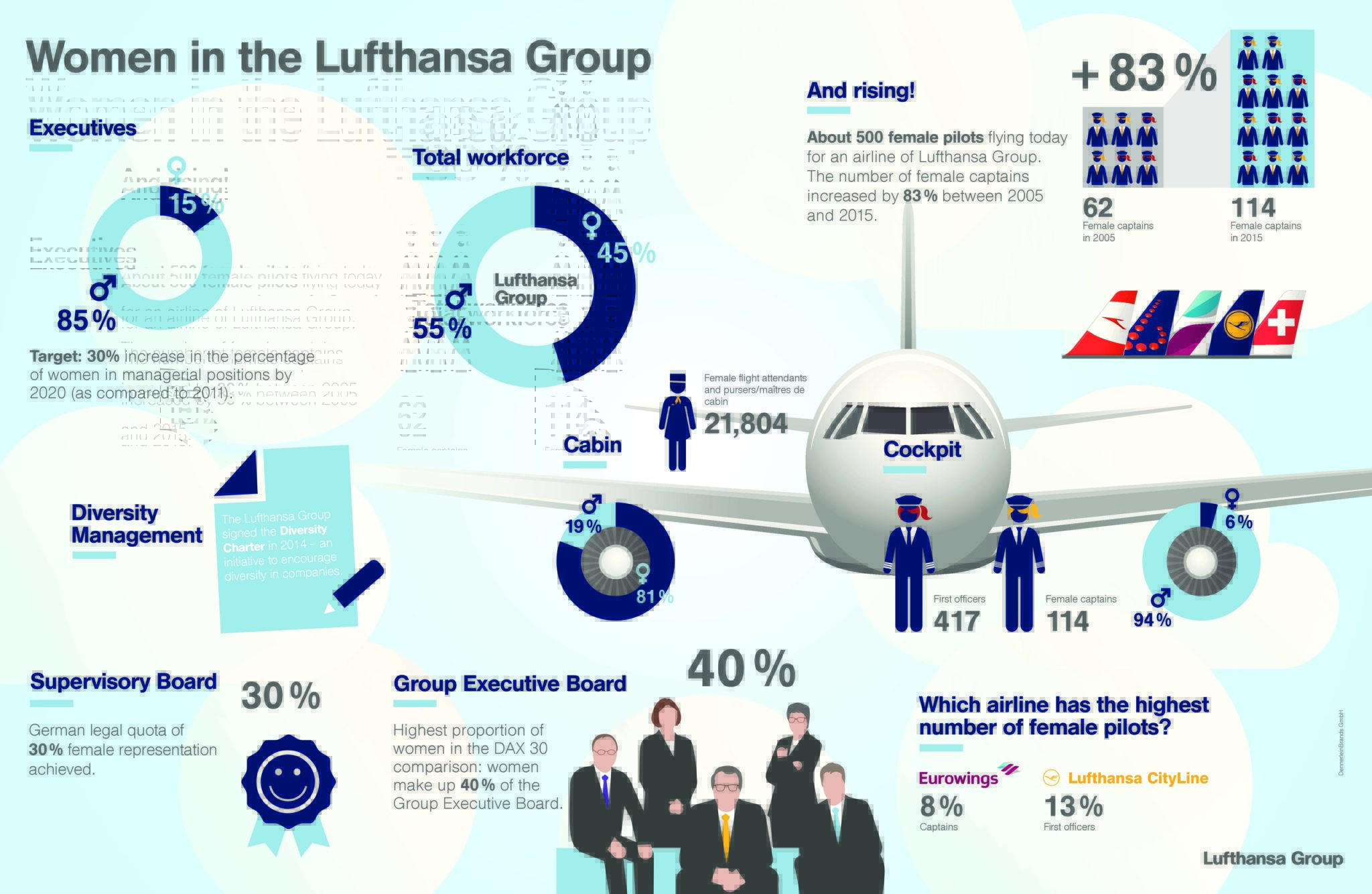 The first plane to arrive will be Brussels Airlines’ flight SN 501, which is scheduled to touchdown at JFK at 1:20pm followed shortly by Lufthansa flight LH 400, SWISS flight LX 022, and Austrian Airlines flight OS 087. Due to the fact that Austrian Airlines is still developing its women cockpit crew for the Boeing 767, the female pilot will be joined by a male pilot as well. After arrival, Meier says all four flight and cabin crews will gather for a celebratory photo shoot to mark this historic occasion. And later in the day at 3:50, a fifth flight, LH 410, will be arriving from Munich featuring an all-women flight crew.

The Lufthansa Group’s head of corporate HR and people strategy, Åsa Lautenberg says that another benefit of today’s event are the powerful optics that it provides to little girls and young women around the globe.

“When we talk about diversity and parity in the Lufthansa Group we always try to do so through changing the pictures in people’s heads. Female pilots are a brilliant and very tangible such ‘picture-changer’! Another one is women in senior management positions. What young girls need are visible role models [and] our IWD event provides the perfect platform and a great story demonstrating this,” she says.

And though the World Economic Forum reported in 2015 that the gender gap ensuring total global gender parity might not fully close until 2133, Lautenberg says she remains hopeful that meaningful change will come much sooner.

“I am convinced that we can make a big difference within the next 5-10 years and I feel confident that we will significantly balance out inequalities in opportunities afforded within our lifetime. It will, however take a combination of women wanting parity and believing that it’s possible and men [experiencing] the advantages mixed teams can bring. There are, however, a lot of influences that are out of our corporate hands. Religion, socialization, social support structures just to name a few. My personal experience is that the real game change comes when men observe their daughters growing up and experiencing the injustice that exist.”

Which, Lautenberg explains, is yet another reason why events like today’s IWD celebration are so important to the Lufthansa Group.

“I’m very proud of this initiative as it is a very tangible example for how women across our airline group share common ground and feel united. It’s important for us as their employer to take note of this and support them in making their voices heard. I wish the crews lots of fun on their flights and at the event and I hope they share the sense of pride that I feel,” she says.

For more information on IWD 2016 events happening near you today, please visit www.internationalwomensday.com.