It is not hard to believe that growing up in an aviation-infused environment can lead to a career in the industry. Growing up across the street from the western edge of one of the more famous runways in the world – the Princess Juliana International Airport in Sint Maarten – was the beginning of just such a path for Amber Hellebrand, Winair’s newest pilot. But even with that immersion in the aviation lifestyle her path to working for the carrier was not a typical one.

Sitting down to chat about her experience with RGN, Hellebrand recalled her early years on the island. “I used to see the airplanes coming over and at that point it had already started. I loved to see them fly and I pretended to be an airplane as a child. I always wanted to be a flight attendant when I was younger.”

Her family moved to Holland when she was six but the aviation bug stuck. As she continued in her studies and began thinking about a career, being on a plane was still at the forefront of her mind but the exact path remained unclear. “It never occurred to me that being a pilot was an option because its not that common for a girl to be a pilot. One day my dad said, ‘You’re good at math. You’re good a physics. You like to do it. Why don’t you consider being a pilot?’ And that sounded perfect to me. It sounds more fun to me to be in charge of the aircraft. I would rather be responsible for the whole thing and flying the plane.”

Hellebrand’s training began in Holland when she was 19 with the requisite written studies and tests. From there she moved to Arizona for the practical part of the training. After her flight school graduation Hellebrand was searching for her first job as a commercial pilot when an uncle still on the island informed her that Winair was looking for new pilots. She applied for the job, confirmed an interview date and purchased a one-way ticket back to the island. The interview was successful and soon she was taking the requisite training to fly the Twin Otter aircraft Winair operates around the islands. 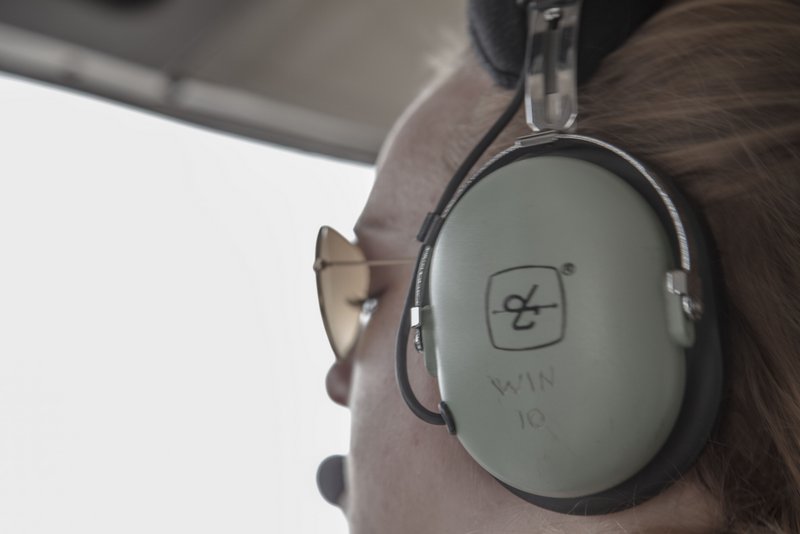 Her heritage was a key factor in securing the job. The company hires mostly locals for its operations. With very limited higher education offerings on the islands there is a significant “brain drain” as kids grow up. Many go to university in France, the Netherlands or North America. And few return to the islands after school. By focusing on hiring locals the airline is bringing some of those people back. This may be a small point of frustration for others who want to fly for Winair – Hellebrand noted that some of her classmates are interested in flying for the company, too – but it serves the community well.

A typical day can see her fly two to three roundtrips in the low season and as many as eight in the high season, depending on the destinations being served. It is hard to build flight hours but the overall experience is strong, including some of the more challenging landings that commercial aircraft make. “You’re not in the air for long. You make a lot of landings. I’m working on my hours but I make more landings than hours. If I go to my next job they’re going to look at the hours. But I think for experience, in my opinion, doing what we do builds a lot of experience. Starting an engine, shutting it down. We do it over and over again. That’s also good experience,” she said.

Hellebrand acknowledged that there is still much to learn on the job while sitting in the right seat. Winair famously operates on two of the most challenging landings in the world. Saba and St. Barth’s require special training for their spectacularly small runways; there is no room for error. Only Captains in the company are trained for these landings.

As a First Officer she won’t be flying those landings and it could be two to three years before she has sufficient hours and experience to move from First Officer to Captain.

And, while she does have aspirations to one day operate larger aircraft, there is the knowledge that making such a move means leaving the Winair family, “The longer I work for Winair the more I realize how special a thing it is we’re doing. Maybe I won’t get the opportunity to do this again. I do recognize that I have something special here.” It is not just that she has a job doing what she loves, but also that she is helping to support the island community. Her island community. Leaving that behind will be most difficult.