In the weeks and months following the 8 March 2014 disappearance of Malaysia Airlines MH370, a number of industry stakeholders grew very vocal about their aircraft tracking capabilities. Inmarsat; Iridium and its Aireon joint venture; and SITA, a service provider for ACARS, were among the companies loudly proclaiming they had a better mousetrap, and each submitted proposals to the IATA-led aircraft tracking task force, which later tabled its recommendations to ICAO. Other firms, both big and small, chimed in, including Panasonic Avionics, streaming data proponent Flyht, and Aircraft Condition Monitoring System (ACMS) maker Teledyne Controls, which suggested higher data links – Ku and Ka – should be used to support enhanced monitoring and black box streaming.

Largely lost in the conversation – and the headlines – was Rockwell Collins, which in 2013 announced plans to buy SITA rival Arinc. As these things go, the integration of Arinc into Rockwell Collins wasn’t necessarily smooth. But things have calmed down, and Rockwell Collins has found its voice when it comes to aircraft tracking.

But MultiLink is also highly scalable and allows the company to add other feeds. Indeed, Rockwell Collins is “already looking at a 7th data feed”, says Tim Ryan, director GLOBALink programs and services management at the firm. “I know Inmarsat and Iridium have both indicated they’d like to provide data to the carriers; depending on how we access that, [we] could inject as a 7th, 8th or 9th data feed that the carriers can benefit from.”

Many airlines already use ACARS VHF and HF ground stations as well as Inmarsat and Iridium satcom, though there are still gaps for over-water operations, as evidenced by MH370. Communicating via satellite requires that certain satcom equipment be installed.

“Certainly with every aircraft type there are a limited number of ways that data can be extracted from the aircraft. There are the passive ground systems like radar and sort of like ADS-B; most aircraft are equipped with that [ADS-B] and we can count on that data. But when you’re talking about communicating over Inmarsat or Iridium or HFDL, those three certainly require that certain pieces of equipment be on the aircraft in order to take advantage of that,” notes Ryan.

But as a growing body of airlines equip aircraft with broadband connectivity pipes to connect both passengers and crew, Rockwell says its new flight tracking service can accept position reports from those Ku- and Ka-band satellite feeds as well. “From an optimal standpoint, if you’re talking about cost, obviously adding additional equipment on an aircraft to take advantage of some of the links may not be the best way depending on what the carrier is trying to do with their fleet. [Airlines are] already thinking about adding long-range communications on the aircraft and maybe this enters the picture to provide additional economic benefit to them…”

The Rockwell executive doesn’t believe there is an optimal link per say, “but the key part of what we’re talking about is that whatever the aircraft has available to communicate its positions is a part of the solution we’re offering” and “whether its delivered over Iridium satellite network, our own HF data link, the Inmarsat satellite network, or VHF data communications network, broadband…whatever the aircraft has to deliver its position information to us, we incorporate that into our solution”. 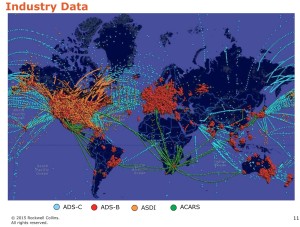 Asked by RGN if Rockwell Collins – a value added reseller (VAR) for the Inmarsat Global Xpress service – can envision a day when GX will be used to transmit this data, Dave Poltorak, a VP at Rockwell Collins’ Information Management Services division, responded, “Can I envision a day? Yes, part of the solution we are offering right now includes data that comes over the Inmarsat satellite network. Our offering incorporates data that is delivered over a number of different sources, and to the degree that the GX service can deliver that position information, we will certainly be able to incorporate that information into our offering.”

These comments are certainly in sync with prior comments made to RGN by Inmarsat VP, aviation safety and operational services Mary McMillan, who said having GX is “an exciting place to be because in terms of having a pipe we can use for flight deck information, what we can actually pipe into the flight deck will only be limited by the extent of our imaginations and whether or not we’ll differentiate between pure safety services – which will for the foreseeable future stay on the L-band channel – or flight deck services [has yet to be determined]. So in some cases, having 3D-type of weather has not been identified as a safety service but in terms of actual applications in the flight deck, as a pilot to have that certainly has safety and operational ramifications so our ability to both increase the efficiency of flight and the safety conditions affecting that flight could be radically enhanced by some of the capabilities that Ka-band will enable.

“I flew as a pilot for many years mostly internationally and when we started seeing some of the connectivity hardware coming on board the airplane, what was really maddening for me. I’m sitting with 10-hour old weather info, and knowing my passengers are connected to the weather channel and have a very accurate depiction of that weather system or formation [is there] so we’re left to real old-time devices in order to circumnavigate or understand the effects [of weather]. Those are discussions we are certainly going to have and as all things pertaining to safety we need to have a very robust discussion with industry, regulators and ICAO to understand what we could do and can implement, and what channel makes sense.”

As mentioned in prior RGN posts, Ku- and Ka-band broadband pipes will be used for far more than simple passenger Wi-Fi sessions and ops benefits like real-time electronic flight bag applications. Airframers and airlines are working towards moving aircraft health data over broadband. They’re also studying transmitting black box data over broadband in triggered transmissions in the event of an emergency. While aviation consultant Michael Planey warns that it would be “nebulous” for anyone to suggest that airlines should rely solely on broadband pipes to track aircraft and transmit critical data, he notes that broadband can provide a complementary role. There are many, many data points on an aircraft. Once connected aircraft are speaking to an airline’s IT infrastructure, they become a “node on their network”, he has long professed.