Think that aircraft seat pitch can’t get any tighter than 28 inches? Think again. Ultra slimline economy class seat concepts under development by Zodiac Aerospace and other interiors companies could accommodate a 27-inch seat pitch, and are targeted at the short-haul market.

The latest innovations in seat geometry are particularly well timed. EASA last week issued a Type Certificate (TC) update that provides a path forward to increase capacity on the Airbus A320 to 195 seats – a whopping 15 more seats than the current 180-seaters now flying, and six more than the 189-seat capacity for which Airbus recently sought approval. 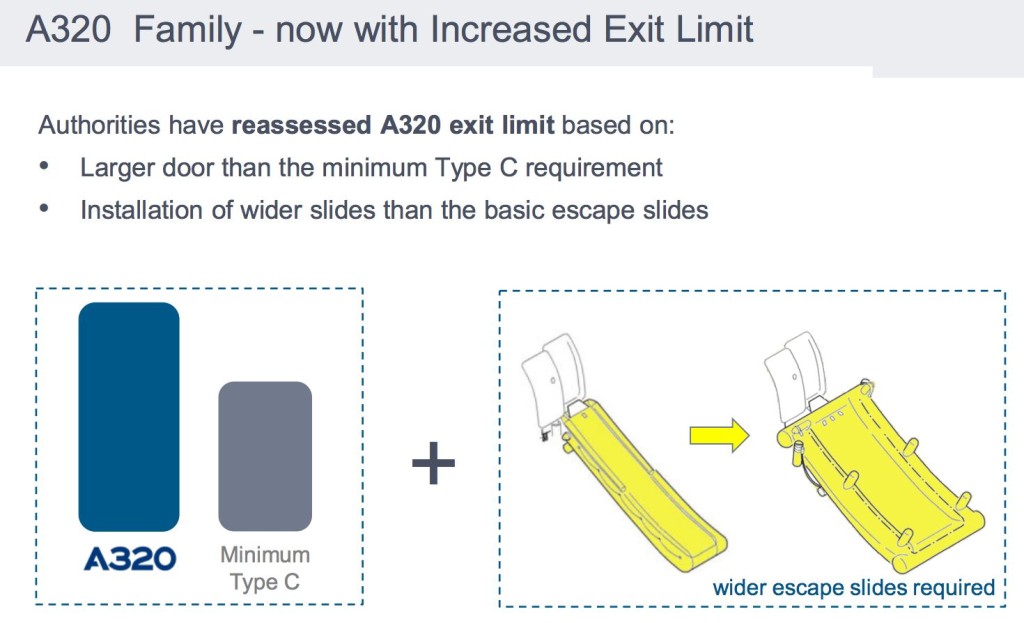 “Modification 156723 enables the maximum seating capacity to be increased up to 195. This modification defines a virtual envelope of the Layout of Passenger Accommodations (LOPA) and does not constitute an authorization for the installation of seats in excess of 180. A separate approval is needed for the installation of the individual customized cabin layout and the necessary cabin adaptations up to 195 seats,” said Airbus.

The European airframer can incorporate its high-capacity aft galley configuration with modular lavatories to add some seats to the A320. But savvy flyers wonder whether super slim seats will be pitched at 27 inches to accommodate 195 seats. They’re also asking how evacuations can be achieved in 90 seconds, even with larger doors and wider evacuation slides.

We know that Airbus believes seat width plays a far more important role in passenger comfort than seat pitch. Indeed, the airframer suggests that an 18-inch wide seat (featured on the A320) pitched at 28 inches is equivalent to a 17-inch wide seat (featured on the Boeing 737) pitched at 30 inches. It’s not a stretch to assume, then, that the airframer and its airline customers see an opportunity to shave another inch from the pitch, offering 27 inches, and still remain competitive. 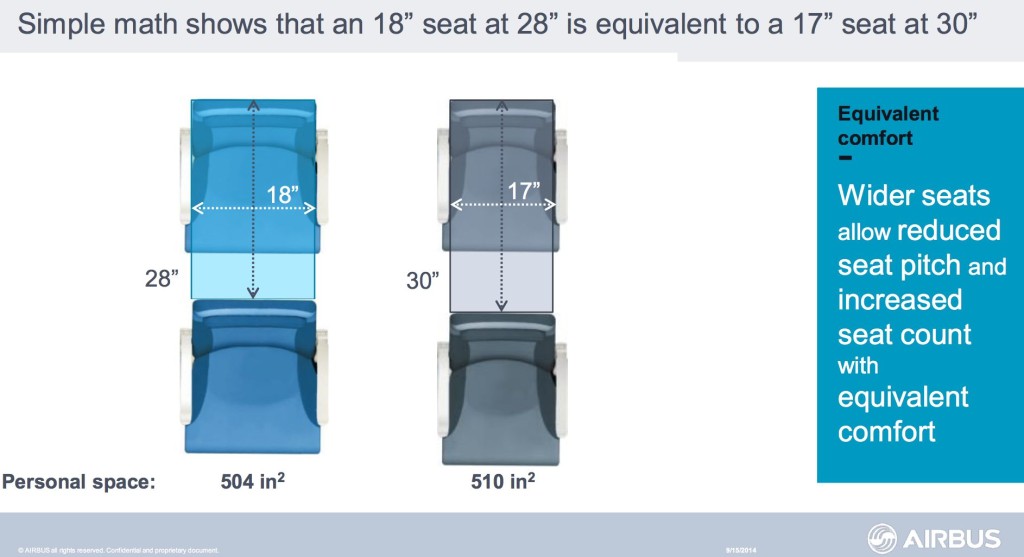 Seat makers have been prepping for the prospect that higher-density aircraft configurations are in the offing. Zodiac, for instance, last year unveiled three new forward facing seat concepts at the Aircraft Interiors Expo in Hamburg.

Two of the three designs were pitched at 27 inches, even though a 28-inch pitch has traditionally been considered an informal bare minimum standard in the industry. Zodiac executive VP communications and investor relations Pierre-Antony said he believed the seats would pass certification at 27-inch pitch because the requirement is not about inches, but rather “the ability to debark the aircraft very quickly”.

A third design, a carbon-fiber composite seat known as L3, was displayed in a 28-inch pitch, and is now being offered to airlines. Developed in partnership with Hexcel, L3 is “quite advanced with our certification process”, said Vastra. See a video of the three designs below.

Noted travel analyst Henry Harteveldt said he is concerned that airlines would adopt ultra-slimline seats for aircraft that fly medium-haul or even longer. “Particularly for airlines that service North American and European markets – where there is an aging population on flights of four or five hours or more – you need to provide a certain amount of lumbar support for comfort, and the thinness makes me wonder can you support what passengers want to have in terms of comfort and, for instance, use your laptop in a reasonable manner?”

He said his primary concern, however, is safety. “They have to stand up to 16G testing; that takes a certain amount of strength. And then my concern is egress from the cabin. Can you get a plane packed at 27-inch pitch through the number of exits? The question is – will they be able to get across that hurdle?”

Yet, it seems the only thing that held airlines back from adopting 27-inch pitch on the A320 in the past is the fact that the aircraft was only certified for a maximum load of 180 seats. “The A320 has an exit limit of 180, and you don’t even have to go to 27 inches” to achieve that, Lufthansa Group executive VP fleet management Nico Buchholz told journalists at a media briefing in New York in late 2013.

That’s no longer the case.

In addition to certifying the A320 for more seats, Airbus has developed a overhead bin solution for the narrowbody, as first reported by RGN. Like the Boeing 737NG’s Sky Interior, the new pivot bin coupled with mood lighting – shown today at the ISTAT conference in Phoenix for the re-engined A320 – gives passengers a sense of more space.

But at the end of the day, we know we’re a hair’s breath away from being stacked like cordwood in-flight. 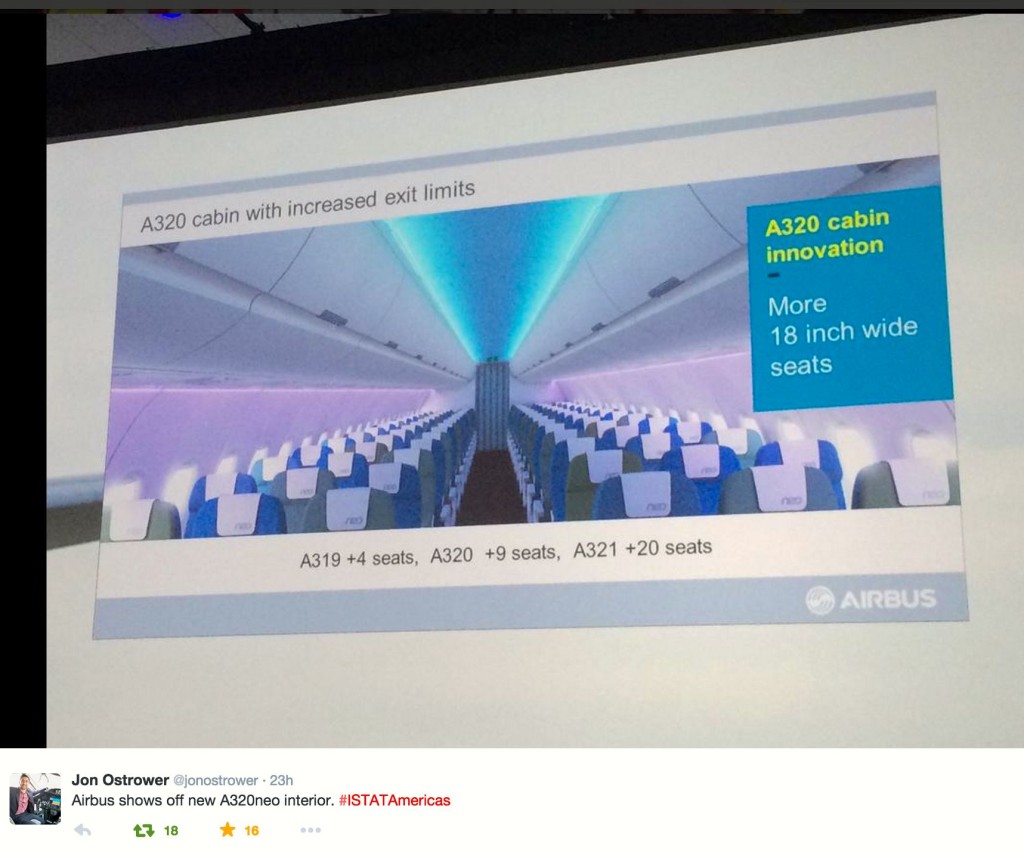 See Zodiac’s new seat concepts in the video below. Note that I am 6ft tall.