WASHINGTON: Champions of Open Skies agreements met yesterday in Washington DC to make the case for why the US should continue to welcome robust competition from international carriers, which they say expands markets, ensures lower airfares and improves overall customer service.

“I spent over a decade at the State Department negotiating Open Skies agreements and helping make America’s pro-competitive, pro-growth, and pro-consumer Open Skies policy a template for the rest of the world,” said John Byerly, a former Deputy Assistant Secretary for Transportation Affairs, who is currently a registered representative for both Emirates and Norwegian airlines.

“I am convinced that Open Skies remains the right policy for our country. Those who now attack it seek to thwart competition, stifle growth, and deny choice to consumers.” 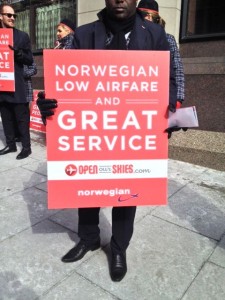 A group of US-based flight attendants from Norwegian picketed outside the National Press Club, where the forum was held, to plead for approval of the carrier’s foreign air carrier permit, which has been languishing for more than a year at the Department of Transportation (DOT). The permit would enable Norwegian to expand service between the US and Europe.

But Byerly believes the DOT’s delay in approving the application is inappropriate.

“It’s way out of bounds,” he says, adding that the approval process usually takes about 60 days. “By the end of August [2014] everything was in the docket but they haven’t decided.”

He says he suspects the DOT doesn’t want to approve a permit that would open the door for the first European-based LCC to enter the US market.

Mainline carriers Delta, United and American are lobbying the DOT to block the new entrant as well as to constrain competition from Gulf carriers Emirates, Etihad and Qatar Airways.

Earlier this week, Delta CEO Richard Anderson stirred up turbulence when he said the Gulf carriers enjoy government subsidies that give them an unfair advantage. He ratcheted up the criticism by implying on CNN that the 9/11 terrorists, who hailed from that region, had forced US carriers to go through a “massive restructuring”.

But critics immediately pointed out that US carriers enjoy protections through the US Chapter 11 bankruptcy process that allows them to wipe out debt and obligations to employees.

Byerly claims the big three airline CEOs have met behind closed doors with government officials in an effort to renegotiate or even terminate Open Skies agreements that they don’t like. Documents from the meetings have not been released to the public.

“They appear to think it’s just dandy to have Open Skies rights into market where it enhances their profits but then to close the door in markets where competitors pose a challenge,” Byerly told RGN of the complaining carriers, and he cited RGN’s recent opinion piece suggesting US carriers needed to “stop whining and start innovating”.

Norwegian is the second largest airline in Scandinavia and the third largest low-cost airline in Europe with approximately 4,500 employees. It operates 424 routes to 130 destinations in Europe, North Africa, the Middle East, Thailand and the US. In 2014, Norwegian carried 24 million passengers. The carrier is opening an Ireland-based affiliate, Norwegian Air International (NAI) with plans to expand service to the US and throughout Europe with a fleet of new Boeing 787s.

“We’re very disturbed when we see the storm clouds gathering in the skies over Open Skies,” said FedEx’s Sparks. “We think competition is good for the industry. We’re busy bees and we’d like it to stay that way. Our view on competition is, ‘bring it on’.”