Between January 1, 2010 and the end of the third quarter 2014, the Gross Domestic Product of the United States rose 11.1%. Over the same period of time, the S&P 500, an index of 500 large publicly traded companies has risen 68%, and the price/earning ratio of S&P 500 companies has remained in a range between 17 and 20. This tells us that earnings have increased over the same period because the ratio of price to earnings hasn’t shifted too much. If the country isn’t making much more, how are these companies earning more money?  The answer is reducing costs, buying back shares, and delaying capital expenditures.

Now what does this have to do with airlines? It’s a very good question as airlines are capital-intensive businesses with high labor costs and low margins. The methods of creating earnings mentioned above simply aren’t available to airlines. Aircraft delivered during the Reagan years have to be replaced and labor agreements don’t provide airlines with the ability to simply shed labor capacity on a whim.  Granted, new aircraft have lower maintenance costs and thereby affect earnings, and system-wide load factors have been at multiyear highs, and the raft of ancillary fees paid by passengers has resulted in billions of dollars in extra revenue. None of these factors, even in aggregate, can explain the following: In just under five years, while the S&P 500 has gained 68% of value, the S&P Airline Index is up a whopping 160%. This includes a 34% loss in 2011. In the last three years alone, the airlines index is up 175%, far outpacing a very bullish stock market over the same period.

Why is the index of this historically dysfunctional industry roaring ahead at an astounding pace? The answer is oil. Over these last three years, when the S&P Airline index has been roaring, West Texas Crude has been diving. The price of oil has dropped 35% over the last three years. Fuel is the biggest single cost of airlines. Historically, airline stocks and oil are inversely correlated. Given the industry’s history of destroying invested capital, this inverse correlation is the primary reason to own airline stocks long term. They are simply a hedge against oil. The thing is, oil always comes back. Right now, airline stocks are Cinderella after the fairy godmother waved her wand but everyone’s forgetting what happens at midnight. The magic will end, oil will come back and the stagecoach will turn back into a pumpkin.

The recent performance of airline stocks has drawn the attention of Wall Street analysts, who have their own ideas of how airlines should be maximizing shareholder value. Analysts want airlines to do two things: cram more seats into every plane and charge more fees for everything. More seats equals lower CASM, and more fees is more revenue. JetBlue recently got bullied into announcing that 18 of its A320s would soon have 10% more seats and it was going to be adding ticket classes that don’t include a free checked bag. JetBlue has been a consistent performer financially and built its foundation on being customer-centric. Those customers feel like they’ve been dumped by an airline that came to the grand ball with them, only to run off with the vixen of Wall Street.

Irrespective of stock prices, the US airline industry is stronger than it has been in years. Much of this strength is due to capacity discipline. Instead of chasing market share, airlines have been chasing yield and in the process, took capacity out of the system. Wall Street would have the airlines reverse course and stop doing the things that got them where they are. Analysts want airlines to add more seats in an effort to drive down CASM, but they don’t realize that in doing so, unless carriers are parking planes, they’re adding capacity to the system. Additionally, adding more seats isn’t an economically frictionless activity. Slimline seats aren’t cheap and it takes time to refit a cabin.

On March 1, 2012, American announced that it was removing a row of seats from its 737-800s to make room for it extra legroom ‘Main Cabin Extra’ product. In the 2012 configuration, an additional 4 seats had been blocked off in order to bring the seat count to an even 150, which allowed American to use one less flight attendant. Part of this move was based on Main Cabin Extra. The other important aspect was that American had been replacing its large fleet of old MD-80 Series with 737-800s on a 1-for-1 basis. The MD-80s had 140 seats, while the 737s previously had 160. American was finding that, while the overall trip costs of the new planes were lower, they were just too much capacity to fly on routes previously served by the Mad Dogs.

The move to 150 seats in 2012 allowed a better capacity match, increased revenue opportunities from the extra leg room seats, and reduced labor costs. On January 28, 2014 American announced that it was parking each of its 737-800s for five days in order to add another row of seats, bringing the seat count back up to 160. In two and a half years, all 200-plus 737s had been removed from service, twice, to change the interior configuration. The costs, in labor, materials, and lost usage of the plane, are not insignificant, and have to be measured against the financial benefits.

The message for airline executives is this: keep doing what you did to get here. Remember your capacity discipline. Remember that your customers aren’t self-loading freight. Don’t listen to bank analysts who think they know your business better than you do. They don’t have to live with the consequences of their ideas. Oil prices will eventually rise, the analysts will slap your stock with a “sell” rating, and you’ll be left with the passengers you treated like sardines in a can. 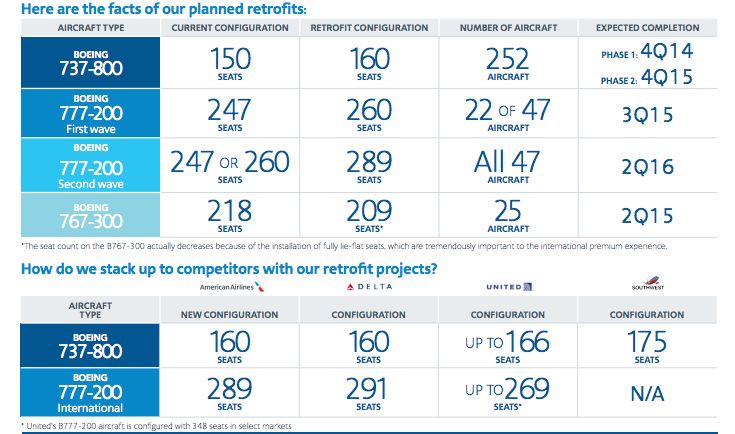 Op-Ed: Hidden-city ticketing not so hidden to the masses anymore