“Yes, I can confirm we are no longer using that technique,” Gogo spokesman Steve Nolan told RGN after I observed that the practice had been rolled back during a recent flight. The image immediately above shows YouTube working through Mozilla FireFox; it was taken at 11:01 Phoenix time on 13 January on board US Airways flight US425 between Phoenix and New York JFK. 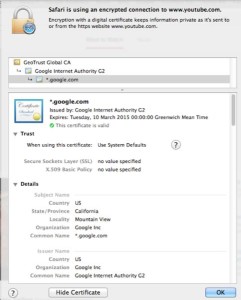 To the right is an extract of the valid certificate via Apple Safari, screen-grabbed on the same flight.

So why use fake certificates? YouTube by default is used in an encrypted mode. Thus, blocking video streams from YouTube is a very tough thing to do without blocking the entire site.

However, by introducing its own certificate (which is akin to an “attack” of sorts – called a  Man in the Middle Attack), a third party can potentially decrypt what you’ve been up to, including what you’ve been watching on YouTube.

Gogo roundly denied snooping on any passengers, and assured customers that “no user information is being collected when any of these techniques are being used. They are simply ways of making sure all passengers who want to access the Internet in-flight have a good experience.”

Even so, the company faced criticism for essentially trying to “crack a nut with a hammer”. After all, there are other ways to achieve the same thing – be it IP blocking, an Access Control List, and on and on.

Gogo’s decision to use an alternative method will doubtlessly be appreciated by security-conscious travelers. 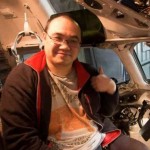 About the author, Kevin Marshall:

Kevin is the editor, photographer, writer and coffee drinker on Economy Class and Beyond, which covers the aviation industry and the passenger experience. He also shares his personal thoughts on travel (and has been known to use sick bags to fashion seat-back holders for his iPhone). You can follow him at @EconomyBeyond.

SIA vows not to cannibalize other products for premium economy