NEW YORK: Air France has been going through a fair bit of change recently. Just a few months ago, the airline rolled out its new widebody cabins. Less than two weeks ago, it revealed its new medium-haul cabin, complete with news that it will trial inflight connectivity on two Airbus A320s through a partnership between French teleco Orange and Global Eagle Entertainment. At the opening of its new lounge in New York yesterday, Air France-KLM CEO Alexandre De Juniac provided some insight into the upcoming changes and reasoning behind them.

The overhaul to the carrier’s medium-haul fleet will see slimline seats installed and seat pitch set to 30 inches in Business Class, and just 29 inches in Economy. These measurements are on the low end of the full service carrier spectrum, closing in on low-cost carrier measurements. However tight the pitch may be, De Juniac believes that improvements made elsewhere in the experience will compensate for the tight squeeze in the air. 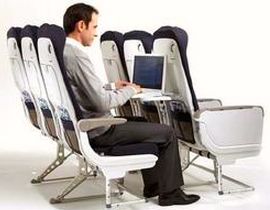 “I will tell you on that point that, I think we have to improve not the pitch, because it is basically the same seats in the old plane….We will improve everything else – the meals, the service, the service on the ground, the quality of the wines – so it will be more on the other part of the [soft] service that we will try to improve,” said De Juniac.

When asked if improvements to the quality of service and other enhancements will be enough to distract passengers from the tight legroom, De Juniac responded, “It’s what we think; it’s what we have coming from our surveys.”

Meanwhile, Air France-KLM has been trialling Panasonic Avionics’ Ku-band connectivity system for over a year on one Air France 777 and one KLM 777. De Juniac said he has reservations about the capabilities of current inflight connectivity technologies. “We will equip our long-haul fleet in the future. But frankly, I think technically the solution is not optimal. Everywhere, the bandwidth is not large enough.” High throughput satellites, which will be launched in the coming years, are expected to deliver far superior speeds than available via broad beam Ku today.

While De Juniac was clear in stating his opinion on inflight connectivity’s current technological deficiencies, he noted that his concerns would not slow down the potential roll-out on Air France’s fleet. “We will do it because it’s a request from our passengers,” said De Juniac, clarifying that most passengers are “demanding connectivity now”. Although De Juniac mentioned the availability of Gogo’s air-to-ground network in North America, he did not mention Inmarsat’s upcoming ATG/S-band service, or whether the airline will adopt this solution for its short- and medium-haul flights in Europe or embrace the Orange/Global Eagle offering.

On the flip side, De Juniac said that a sizable portion of Air France and KLM passengers specifically requested aircraft not be equipped with connectivity. While those passengers may not get their wish, De Juniac assured them that while mobile connectivity is coming, voice services will not be enabled on Air France or KLM flights.