Eager to boost its Skytrax rating to five stars Lufthansa is pressing ahead with a number of initiatives aimed at improving the passenger experience for business class customers.

The German flag carrier, which currently enjoys a solid four-star rating, believes that the installation of new full-flat business class seats across its long-haul fleet represents a crucial first step towards being rated among the industry’s elite, such as five-star-rated Qatar Airways and Singapore Airlines.

But while the airline’s first- and business class hard product “is really important for financial success”, says CEO Karl Garnadt, “service needs to be five star” as well.

To wit, Lufthansa plans to roll out a new Signature Service for business class next year, after testing the hospitality concept on various random long-haul flights in 2014.

At present, flight attendants serving business class passengers use food and beverage trolleys, but Signature Service “would change the service routine in a way that each passenger would be served with a tray by the flight attendant”, says Garnadt, noting that the service is more like that experienced at a fine dining restaurant. Attendants will also have responsibility for smaller groups of passengers, with the aim of ensuring passengers get the feeling of being “more personally attended”. The service will start in gusto on some Asian flights in 2015 “and [we’ll] see how passengers react”. 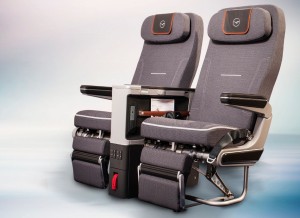 Lufthansa’s Munich airport hub is rated four stars by Skytrax, but the facility “is going for five stars so we join forces there [because] we think it’s extremely important in that case that on the ground and in the air we have the same level of service”, says Garnadt. Additionally, Lufthansa has done a lot of work in four-star-rated Frankfurt airport, not only in the first class terminal but in the premium lounges, “and is coming very close to that”, top-tier status as well, he notes. “Whenever you talk to very frequent customers, everybody is happy with the first class terminal in Frankfurt. We know this is a small segment only, but it’s a signature product for us which is a clear sign of commitment to quality.” Upgrades to priority check-in facilities in Frankfurt and Munich, plus other ground facilities, are also in the works.

Though Lufthansa’s new business and first class offerings have been “well received”, the company is reporting an “absolutely fantastic” response to its new Premium Economy product, which offers “about 50% overall more space, a different quality in recline, additional features, upgraded services and a higher baggage allowance”, notes Garnadt. “We hope – and think we show it so far – that we really attract leisure travelers or private travelers who are looking for better products…”

As of yesterday, Lufthansa Premium Economy is offered on all routes flown by a Boeing 747-8 from Frankfurt (including to Bangalore, Buenos Aires, Chicago, Hong Kong, Los Angeles, Mexico City, Beijing, São Paolo, Seoul, Tokyo-Haneda and Washington, DC). Additionally, Lufthansa passengers now have the option, for the first time ever, to bid on an upgrade from economy class to Premium Economy. Customers that have a valid Lufthansa economy class ticket can make an individual bid for an upgrade by logging into the Lufthansa web site and calling up their booking. If the booking qualifies for the so-called “myOffer” upgrade, a notice for this will appear, and passengers will be linked through to the myOffer page, where a bid can be placed. Bids can be edited and retracted up to 72 hours before the scheduled departure of the flight. After that, the bid is binding.

One amenity offered across all classes on Lufthansa – and enjoyed personally by Garnadt – is Ku-band satellite-supported inflight connectivity from Panasonic Avionics. “One thing which I like very much is the fact that we have live Internet on the entire long-haul fleet, except areas over China where you can’t get it [due to regulatory issues]. You just log in with your personal devise, even I do it, and you can watch live TV. From Frankfurt to Tokyo, I watched an NFL match and it was quite nice, and we offer this throughout.”

Lufthansa is committed to offering Wi-Fi and mobile connectivity, but does not permit voice calls

Though Lufthansa is also fitting its long-haul aircraft with mobile connectivity to support SMS and mobile data use, the carrier has opted not to permit cell phone calls “because the majority of customers tell us, ‘please don’t do it’. So you can stay connected with the world, use your own device, get access to the latest IFE; and you can stay in touch with work, but you cannot talk, [except] to the service staff, and to your neighbor in the seat,” quips Garnadt.

Even though Lufthansa is mulling the creation of a long-haul, low-cost offshoot, its intention for the core product is to really “sharpen and upgrade the shiny brand of Lufthansa; we want to make sure it stays what it is, a really premium brand in aviation”, concludes the CEO.