ViaSat is “on track” with the critical design review (CDR) of its supplemental type certification package for Ka-band inflight connectivity on Israeli carrier El Al’s Boeing 737 aircraft, and is planning an “April or May first STC flight”, director Don Buchman tells RGN.

The company will use the hybrid Ku/Ka-band radome developed by Radant, which was acquired last year by Communications & Power Industries (CPI). This is the hybrid radome flown over the summer period on a government aircraft “and was prototyped” for Ku or Ka, “even though it will be just a Ka antenna underneath” in the El Al installation, says Buchman. “It will be efficient enough. It’s approved; it’s a pretty standard radome shape.” 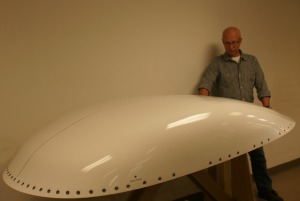 The CPI Radant hybrid radome represents the culmination of R&D efforts that began 12 years ago, when Radant recognized that radomes designed for Ka-band and higher could not use the same prevailing technology that had been used up to Ku-band. This conclusion was reinforced a few years ago when the bird strike requirement was expanded, says Dr. Jean-Claude Sureau, president of the CPI Radant Technologies Division.

Sureau tells RGN, “More recently, this technology was further improved to increase the transmissivity bandwidth making it possible to achieve low loss over the full ITU ‘Ku/ Ka’ bandwidth, as well as meeting the cross-polarization regulatory requirements, while maintaining the bird strike compliance. This has led to a second recently awarded patent.

“CPI Radant has been able to achieve this performance using readily available commercial materials and standard processing, albeit with a different layering configuration. This technology is now well-proven with several hundred radomes of various radome types produced.” Sureau notes that the radome is also available at different price points, dependent on the level of performance excellence required.

ViaSat will obtain STC on the El Al 737 from the US FAA. “Israeli CAA has a bilateral agreement with the FAA so we can run it here as a FAA program. That’s a big help to the program,” notes Buchman, who adds that ViaSat is gunning to have the system flying on a 737 in revenue service by the summertime. “That’s what we’re aiming for. We are pretty excited with a lot of things we’re cooking up with El El.”

Because El Al is also rolling out Lufthansa Systems’ BoardConnect wireless IFE solution on its 737s, ViaSat must integrate with BoardConnect “because on an airplane you can’t have two separate Wi-Fi networks so we have to integrate together to coexist; that is going fine. We’ve always had a good relationship with Lufthansa Systems,” says Buchman.

ViaSat’s true hybrid Ku/Ka-band connectivity system, meanwhile, is generating “a lot of interest”, according to Buchman, as it would enable airlines to offer high-capacity Ka over land masses, while exploiting Ku over the ocean. “I have been pitching that concept for six or seven years – and I did a drawing in 2007. Well, we built it, and once we flew it, the combination of that test flight and the proof in the market that we’ve done with [Ka-connectivity] on JetBlue and United, has resulted in genuine interest from several airlines on that solution.”

It is still possible that ViaSat will announce a customer for the hybrid Ku/Ka connectivity solution before year-end. “If not end of year, it will probably be early 2015,” says Buchman.

ViaSat is also eager to win business with A320 and regional jet operators. “We’re always looking at RJs; it’s definitely something we’re looking at. We have ideas we’ve pitched, but haven’t built an antenna yet, though certainly we have the wherewithal to do it. We’re also big on business jets; we have a Ka version of what we fly on Yonder [ViaSat’s Ku-band system & service]. We have a tail mount antenna but most of these regional jets don’t have a convenient location for an antenna, so we’re looking at more fuselage mount antennas, smaller but we don’t think they have to be that much smaller,” says Buchman.

When considering a connectivity solution, he notes, airlines look at the weight and drag of a radome, but they also look at bandwidth. “People use a lot of bandwidth. We think when connectivity is out there, bandwidth will dominate the cost and you’ll pick your solution based on lowest cost of bandwidth, not the lowest weight or drag solution.”

Meanwhile, Buchman corroborates recent statements made by Glenn Latta, president of Thales’ LiveTV unit, that there has indeed been a thawing of relations between ViaSat and LiveTV since the acquisition of LiveTV by Thales.

When dealing with airlines, there are “two different elements”, hardware and support on the one hand and then the service side, says Buchman. “We have never made any bones about hardware and maintenance; it’s not our core competency. We’re making our own hardware when coming to the satellite piece because it’s vertically integrated, but we don’t have bones about our ambitions in terms of [offering] a total turnkey solution. We let the airlines pick what they want to do. If an airline values turnkey – and I think there is a lot of value to what Thales brings to the table – we’re happy to sell [service] through them and having great success with JetBlue and United. So it’ doesn’t change that scope.”

Some airlines, however, want something different, “so we need to have an alternate offer available and that’s why we step in as prime in certain cases”, which has its advantages as well. “At the end of the day, the product isn’t the antenna or Wi-Fi access points or a portal, the product is offering connectivity to passengers, and when we first launched with JetBlue, that was the benefit of coming directly to us. We changed the service offering a number of times to match the JetBlue service; they wanted to match their brand and personality and what they wanted to offer passengers.

“With direct, you can forge more creative deals than [simply getting] white-label packages [of connectivity service] where there is loss of control. So the airlines are buying a package versus tailoring a package of what they want to do. You’re seeing that play out with Gogo; sounds like a little bit of control is going back to the airlines.”

Detractors of ViaSat’s model often stress that the company doesn’t have satellite redundancy – until perhaps a ViaSat-3 satellite launches after ViaSat-2, which is being discussed. They also suggest that the company could fill up its Ka capacity with residential users in the US, leaving airlines in the cold. But Buchman assures, “We’ll make sure the airlines have the right bandwidth, because those are the best customers in the end from a financial return … We have the ability to turn down [residential] users. We reserve however much bandwidth we need for our current airline customers, and make sure we have that much bandwidth in our forecast for aero and then don’t sell that bandwidth [to residential] customers. It’s nice to have a customer base that allows you to mix and match.”