Consumer technology changes every six to 12 months, but the lead times required for bringing new aircraft seats with inflight entertainment systems to market can actually take years due to a variety of factors, including the lengthy and convoluted process for clearing Head Injury Criterion (HIC) certification. The result is that, by the time an aircraft enters revenue service, its integrated IFE/seats can look and feel somewhat outdated to passengers.

Now the seat makers, IFE vendors and airframers including Airbus and Boeing are working together as part of a new Society of Automotive Engineers (SAE) aircraft seat committee to streamline testing and make certification easier. This in turn will help the industry keep pace with the rapidly changing consumer environment, and better support airframers’ ramp-up of aircraft production.

By working through the new SAE seat committee, the goal is to “help effect change for some of the certification requirements today,” Thales Avionics VP of product management Lori Salazar told attendees at the recent Cabin Integration Symposium in Las Vegas.

The aviation industry adheres to SAE standards for HIC testing. One of Salazar’s frustrations is that, at present, there is too much subjectivity in the HIC testing process. “The test either passes or fails based on a number above or below 1,000 based on the automotive industry standard which can vary by a lot (sometimes 500 or more) each time a test is run. We’re challenging the accuracy of this test based on the varied results with the identical setup . The number needs to reflect only the seat structure (no IFE variables) thus we want to isolate IFE testing from seat testing. We can do this via IFE compression or other tests to validate the energy absorption will be similar before and after changes and thus won’t affect the HIC results. It’s a new method of compliance which will save a quarter of a million dollars every time we have to run a new seat test.” 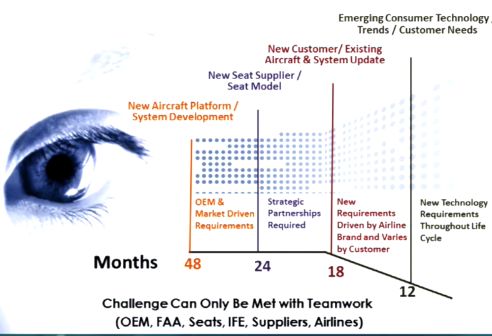 Acro Aircraft Seating managing director Chris Brady shares Salazar’s frustrations. “What’s wrong with the regulations is that actually they’re not specific enough. FAR 25-562 says you should have HIC less than 1,000. So you do the HIC tests, and then the table deploys and the latch breaks and that’s [considered] a fail. It doesn’t say ‘the latch can’t break’ in the regulation. But if it did, you’d understand, so this is where the SAE has got to go into defining what is a successful HIC test.”

“It’s not just about getting HIC value of less than 1,000 as stipulated in the HIC requirement,” added Brady, “it’s when it falls to the discretion of the DAR [designated airworthiness representative] and they’re different from one day to another. Boeing was just with us last week and they said they have aircraft that deliver on the first of January and they deliver 15 more of these aircraft over a year, and on the 13th one the DAR changes his mind and drives back changes to the previous 12. This is madness; commercial madness clearly.”

Passenger safety “is the first priority” as the industry considers new innovations and improvements in seat testing procedures, said Ingo Gathje, head of cabin design office at Airbus, whose Cabin Supplier Council played a pivotal role in spurring the creation of the new SAE seat committee. What is being discussed is “only the peak of the iceberg” in how to drive improvements in the process, said Gathje. “There is a lot more innovation to do, and the lean HIC testing approach is just one of those.” 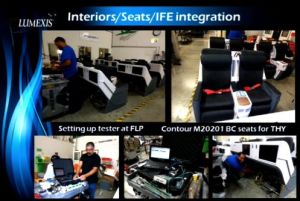 Lumexis has internal testing procedures in place to help streamline the process.

For instance, during the SAE committee’s fourth meeting last month in Memphis, B/E Aerospace gave a presentation on 3D modeling, and showed how to review seats without having to do the expensive certification test, noted Salazar.

Other industry stakeholders are being proactive as well. IFE vendors Lumexis and Panasonic discussed their internal testing procedures, with Panasonic’s executive director of corporate sales and product management Neil James referring to his firm’s processes as “HIC on a stick”. And Lufthansa Systems CIO Jorg Liebe showcased how his company intends to cleverly meet HIC requirements for its new COTS-based integrated IFE/seat.

Lumexis chief technology officer Rich Salter noted, “There’s also an ARINC cabin system subcommittee, and this group will take up production testing of seats and IFE. They are looking at how to write a best practices document for seat testing at final assembly. Airbus and Boeing still say seats are arriving and they are not tested, and IFE is not working so this group intends to do something to try to help that.”

While Panasonic is participating in these groups to streamline testing, the company cautions that moving to a specific standard for IFE fittings, for instance, would make it wary. “Airlines are happier if standardization can be achieved without a series of compromises,” he said. “What we need, I think, in SAE and in other working groups is much more airline participation, much more voice of the airlines, instead of just a bunch of engineers from vendors just sitting around talking about what makes their life easy. So have airlines come in there saying, ‘nobody leaves this room until you solve this problem’. I want customization but I want Airbus and Boeing to be able to have their industrialization too. So it’s getting people together and try to solve a problem rather than just sort of coming up with a series of compromises.”

If lead times can be improved in the process, it benefits everyone, including passengers who will enjoy much better experiences on board as a result, Acro’s Brady concluded.

RGN Premium: Among the many wireless IFE start-ups…