In a move that creates an even starker contrast between the cabin interior options on offer for Boeing 737 and Airbus A320 narrowbodies, Boeing has launched new Space Bins as an optional feature for 737NGs from late 2015, and the re-engined 737 MAX.

The Space Bins are “Boeing-made” and are not being provided by an interiors supplier, according to 737 spokeswoman Dina Weiss. They will stow six standard sized carry-on bags – two more than the current pivot bins installed on 737NGs with the Boeing Sky Interior (BSI).

Carriers can select the Space Bins or the BSI pivot bins when ordering 737NGs and 737 MAX aircraft, says Weiss, adding that the Space Bins will also be available as a retrofit option for current 737 operators. As such, the Space Bins will compete with Zodiac Aerospace’ ISIS interior (previously called ‘Project Amber’ for 737s). See below for a side-by-side comparison of Zodiac’s offering and Boeing’s Space Bins based on available artwork.

Alaska Airlines, which has been taking delivery of 737NGs with the Boeing Sky Interior with pivot bins, will launch the new Space Bins. The carrier needs the space, most especially for short-haul flights from Seattle to Alaska, where passengers don’t want to check bags, and are keen to carry sports equipment on board. The airline says the Space Bins on an Alaska 737-900ER “will hold as many as 174 standard carry-on bags, a 48 percent increase compared to current bins that hold up to 117 bags. Space Bins are deep enough to store nonstandard items, such as a guitar.”

Boeing believes this latest overhead bin option gives it a clear competitive advantage over Airbus, which has not yet rolled out a new interior for the A320, despite the phenomenal success of the Boeing Sky Interior. If passengers are happy, then “the airlines are happy and they’ll want to buy Boeing airplanes so it just makes sense”, says Weiss.

Boeing VP and general manager, 737 program Beverly Wyse adds in a statement, “One of the reasons the 737 is the world’s best selling airplane is because we work with our customers to continuously improve the airplane with features such as Space Bins.”

In March of this year, during the ISTAT conference in San Diego, Airbus said unequivocally it is not planning to offer a new cabin interior for the re-engined A320neo (new engine option), even though multiple industry sources told RGN that the airframer has shown them a cabin concept – including a new overhead pivot bin solution – for the A320 family. 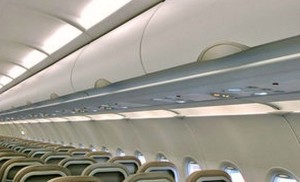 Asked by RGN how the A320neo will be able to compete from a passenger experience standpoint with the re-engined Boeing 737 MAX and its Boeing Sky Interior if the Airbus narrowbody does not feature a new cabin, Airbus senior VP – leasing market Andrew Shankland said, “No new cabin is necessary or planned for neo.”

One month later, Aviation Week cited sources when it reported that Airbus had quietly launched a Single Aisle Incremental Development (SAID) program, also known as the A320neo Plus, which would “result in a series of systems and interior upgrades that would start being introduced as of early 2016 onto production aircraft”. Airbus denied that a concrete plan is in place, said the publication.

Long-time industry consultant Scott Hamilton says the A320 cabin has faced a competitive disadvantage ever since Boeing unveiled BSI in 2009. “Obviously Boeing has responded to the Zodiac interior. Airbus has a good functional interior but it’s outdated now. I don’t think passengers are going to choose their flights based on an interior of an airplane, but you don’t know what influence that will have on the purchases of the airplanes.”

He adds, “I really feel – and have felt for years – that Boeing is a step ahead of Airbus when it comes to the passenger experience.”

While Airbus has been mum about its overhead bin plans – #PaxEx secrets are more closely guarded than even aircraft orders, we should add – the European airframer has been clear about its intent to get certification to increase capacity on the A320, which it describes as the A320ceo (current engine option) and the A320neo, as well as the A321neo and both the A319ceo and A319neo.

In a pre-Farnborough air show news update, Airbus says, “The A320 Family will soon bring to operators the benefits of increased maximum seating capacities. The A320neo and A320ceo’s maximum capacity will increase to 189 seats (versus 180 seats today) in conjunction with a new option for wider escape slides; while the A321neo’s maximum certified capacity will increase to 240 seats (versus 220 seats today), with a new door configuration. This will utilize an additional pair of overwing exits to allow an uninterrupted seating layout from the overwing exits through to Door 1.

“Meanwhile, the A319neo and A319ceo will be able to accommodate up to 156 seats (versus 145 today) in a high-density, single-class cabin arrangement, with a single overwing exit, instead of two required today.”

See a VIDEO of the Zodiac ISIS cabin here.