FARNBOROUGH: Passengers expect to use their personal electronic devices (PEDs) in-flight; they expect Wi-Fi to be accessible, and they appreciate any extra living space afforded them in economy class. Bombardier’s latest CRJ900 configuration – on display this week at Farnborough in the form of American Eagle’s fourth CRJ900 – satisfies all these expectations and more. But if company VP and general manager CRJ Sylvain Leclerc has his druthers, the CRJ900’s cabin entrance will also ultimately be refreshed for customers.

The entrance is functional area, little more than a corridor and bottleneck. It’s an unattractive way to reach the cabin and too narrow to be properly useful, especially with a lavatory door off to the left. “I really don’t like it,” admits Leclerc. “It’s narrow, it feels small, but then opens out into the cabin, where we’ve really got it right. I want to work on the entrance area, the cabin crews don’t like it, I don’t like it and the passengers don’t like it. That’s what we’ll change next.”

In the image above, Leclerc demonstrates the CRJ’s less than optimal entrance area. Perhaps inspiration from the spectacular door area concept developed for the CSeries will filter down to the CRJ. Certainly, in the short term, lighter seats and carpets are under consideration for the regional jet.

Bombardier is ever mindful about the importance of the passenger experience (#PaxEx on Twitter). Improving both aircraft performance and #PaxEx remain high on the OEM’s agenda for a product that it believes retains considerable development potential, especially with technologies and ideas crossing over from the CSeries. 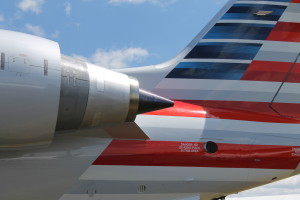 Among its performance enhancing CRJ developments, Bombardier has replaced the original chevron tailcone of the aircraft’s CF34 engines with a conical unit. It delivers a fuel saving in the region of 0.4%, but alarm bells ring when Leclerc explains that the economy comes at the cost of increased noise. The CRJ900 fell well below regulation noise levels and airlines were willing to sacrifice a little of that margin for fuel economy, but will the change be detrimental to #PaxEx?

Bombardier reports no perceivable affect on cabin noise levels, since the aircraft’s signature increases by no more than 0.4dbN. This means it also remains a good neighbor; the human ear is unable to detect variations in sound level smaller than 3dbN.

Meanwhile, the cabin of the American Eagle CRJ900 boasts an all-new three-class interior for 76 passengers with 39-inch pitch in business class, 35-inch pitch in premium economy and a generous 31 inches in economy. The jet’s enlarged bins have the capacity for 50 standard roller bags.

The airline will offer Gogo Wi-Fi by retrofit, although Bombardier has revealed to RGN that it is now offering the same as a linefit option should a customer require it. This is a good news story for Gogo because there are a lot of CRJs in the market that would be prime candidates for Gogo’s first generation air-to-ground (ATG)-supported Wi-Fi solution, as well as its higher-bandwidth ATG-4 offering.