As IATA surveys vendors on flight tracking options, Flyht – the maker of the real-time flight data streaming system AFIRS – has been in direct talks with the association on prevention of further losses like Malaysia Airlines’ Flight MH370. But even if nothing comes of these talks, the company is steadily growing its business, including with a swath of Chinese operators.

Operated over Iridium satellites, AFIRS is normally installed on aircraft to support communication during routine operations – it is not on aircraft solely for use in emergencies but, says Flyht, it “is uniquely capable of automatically switching to emergency mode streaming when an aircraft is in an unusual state or upon request from the crew or the ground”.

AFIRS has proven integral in resolving two inflight crises, according to Richard Hayden, director of Flyht. Hayden described an incident three years ago in which a “nefarious person” on board an AFIRS customer aircraft intentionally disabled all forms of communication save for the AFIRS unit located outside the cockpit in the avionics bay. Using an AFIRS medical emergency phone kept in the cabin, the crew was able to assuage the situation, and restore the aircraft and all on board to safety. 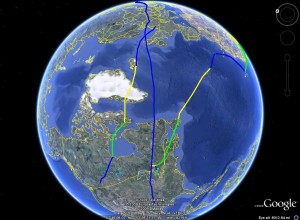 Tracking customer flights over the pole and ocean

The system served a similarly critical role for a US-based charter airline flying American troops home on a transatlantic route, said Hayden. A turbine crack in the engine nearly caused an inflight engine burst, but the AFIRS unit prevented the tragedy through detection of increasing turbine vibration, triggering data streaming down to maintenance who in turn instructed pilots on a course of action.

In past months Flyht’s AFIRS sales have soared from 350 total installed units at the time of the disappearance of MH370 to 218 new confirmed orders. One contract with a Nigerian airline for the sale and delivery of AFIRS for five Boeing 737s, and work with Skyblue Technology Development Co. Ltd. to get Iridium approved in China are largely responsible for the new orders, including units for Air China, Hainan Airlines, Shanghai Airlines and China Southern. Also among Flyht’s new customers is northern Canadian carrier First Air. Air Canada is likewise in talks with Flyht, though the two parties have not reached an agreement.

But Hayden hopes aircraft tracking recommendations from ICAO will be more rigorous. “If they change the reporting interval from one hour, which is what it is now — and that’s voluntary by the pilots — to say 15 minutes, well, it takes less than 15 minutes to end up in the ocean,” he says.

Data streams sent via Iridium in the AFIRS emergency scenario are continuous once triggered. According to Hayden, the data frequency removes the need for an Emergency Locator Transmitter as ground stations can pinpoint exact crash impact location. “What’s missing out of this discussion is the issue of the airlines and the whole industry’s obligation to try to rescue as many as survivors as possible … if you’re not at the scene of a crash with rescue equipment within an hour, you’re not going to have survivors,” he says.

Flyht presented its case last week in Montreal before the IATA Aircraft Tracking Task Force (ATTF), which is in the process of identifying options for the industry. However, both IATA and ICAO have previously said that tracking aircraft – and not streaming data – is the first step and the only item the ATTF will be acting on at this juncture.

See Flyht’s most recent white paper on automated flight tracking and triggered data streaming in the wake of MH370 here (includes details on pricing plus a new section containing Hayden’s musings on IFEC). Automated Tracking and Triggered Data Streaming from Aircraft UPDATE May 26 2014 (1)