BRUSSELS: Oneworld alliance member American Airlines intends to play a steering role in using beacon technology at airports in North America and ultimately across the globe, after announcing it will become the first carrier to use SITA’s Common-use Beacon Registry.

This means passengers can look forward to getting up-to-date and relevant information on their mobile devices, such as indoor directions, walk times to gates, lounge access and alerts about boarding.

Simply put, beacon technology is a way of providing proximity and context information to mobile devices. They transmit a signal using Bluetooth Low Energy -BLE for short – and the signal contains a unique identifier for that beacon. When a BLE-enabled device, such as a smartphone, moves within range of the beacon’s signal it can trigger an action, including displaying a contextually relevant message on the phone. Apple introduced its ‘iBeacon’ technology with iOS 7; this uses BLE and geofencing to trigger the display of location-relevant information.

SITA’s pilot program with American at Dallas/Fort Worth International Airport (DFW) is the world’s biggest airport deployment of beacons to date. American will roll out the program to beta users on select routes and airports this summer. 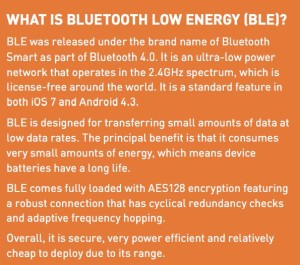 “Beacons provide a fantastic opportunity to improve the passenger experience, but to do so they must be consistently deployed at all airports,” American Airlines director of mobile apps Phil Easter said this morning at the SITA IT Summit in Brussels. “At American Airlines we are working with SITA to use beacon location detection to enhance our mobile app and give our passengers travelling through the airports accurate way-finding information. Using SITA’s Registry will enable us to provide the same great user experience to our passengers using our app in airports not just in North America, but across our global route network.”

SITA Lab, the strategic technology research arm of SITA, began playing around with beacons towards the latter end of last year. In the beginning of 2014, the company spoke to Virgin Atlantic about conducting a mini trial with a few beacons at London Heathrow, and tie those with the Apple Passbook app. “We informed Heathrow operators because beacons are a radio emitter, and you have to notify the airport for anything with radio frequency. The guys at Heathrow said they had concerns that the beacons would interfere with Wi-Fi, so we conducted a full test on it to get guidance on where the beacons can be placed specifically,” Kevin O’Sullivan, lead engineer at  SITA Lab, explained to Runway Girl Network in an interview.

Through its work with Virgin Atlantic, SITA Lab learned that “you can’t just have everybody deploy beacons because airports have to provide services to multiple airlines. If you let everyone do their own thing, you’ll have a complex mess. You have to treat beacons as common-use infrastructure, and what the Heathrow [trial] told us is if you have ten airlines sharing a gate, you don’t want ten airlines putting their own beacons [there] … so that led us to a beacon registry, and airlines can access the metadata associated.”

Beacons represent “another step” along the path towards the Internet of Things (IoT) at airports, notes O’Sullivan, though it “depends on how you define IoT. Beacons in general are being promoted as just pure Bluetooth and emit a radio signal; they don’t hook to the airport Wi-Fi network and beam information back to airport authorities, but nonetheless they do talk to specific apps on smartphones and give proximity … it’s under that umbrella.”

Since SITA Lab issued a white paper on beacons, it has received a lot of feedback from airports and airlines. SITA chief technology officer Jim Peters says: “As we worked with airlines across the world including American Airlines at DFW and San Francisco International (SFO), and others at London Heathrow Airport (LHR), Shanghai Hongqiao International Airport (SHA) and Copenhagen Airport (CPH), we saw very quickly that an industry approach was needed.

“We have launched the SITA Common-use Beacon Registry to give the industry a single point of contact for common-use beacons deployed at any airport around the world. With it, airports can control and share the meta data – the exact location including information on gates, terminals, etc. – with airlines and other partners and allow passengers to receive accurate and relevant information.”

The SITA Common-use Beacon Registry defines standard data sets and beacon types to be positioned at gates, retail areas or checkpoints. This will allow airlines and airports to share beacons to get location information and provide personalized services to passengers. An API is available for app developers who want to use these beacons for developing travel-related apps.