Back in April, at the Aircraft Interiors Expo in Hamburg, RGN discovered something quite unexpected while paying a visit to the stand of the world’s largest airline catering company, LSG Sky Chefs. There in the caterer’s exhibition booth, far removed from the Panasonics, the Gogos and the other tech wizards of the ‘IFEC Zone’, was a man keen to talk about a new IFE streaming solution that his company had recently developed, and even secured a first customer for.

In February 2013 LSG Sky Chefs became a shareholder in its strategic partner Retail in Motion (RiM), a provider of buy-on-board and retail business solutions for the airline industry. LSG Sky Chefs now benefits from the vast onboard retail expertise provided by RiM, and RiM can profit greatly from the massive logistical footprint and airline relationships possessed by the leading caterer. It also just so happens that a little over two years ago Media in Motion (MiM), a tech-firm operating under the RiM umbrella of services, began developing a server-plus-WAPs solution capable of streaming wireless entertainment throughout an entire narrowbody cabin.

“The box server is in the form of a galley oven and it’s a simple plug and play solution. The idea behind it is to allow an airline the ability to install the server in minutes by simply removing an oven (which are often not used on short- to medium haul flights anyways) and replacing it with our box,” explains Jan Blanchard, CCO at Media in Motion.

He stresses, however, that simply selling this solution to the airlines is not the true goal of MiM, RiM or LSG Sky Chefs. They’re set on a longer romance. 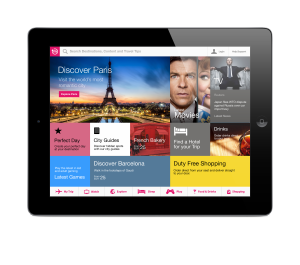 This screen shot provides an example of how the MiM solution’s customizable web portal page might appear on a passenger’s device.

“The difference between us and providers of similar solutions would be that a lot of those companies, once they have provided the solution and the solution is deployed, find their job is 99% done,” he says. “From our point of view, when the installation is deployed and functional, our job really starts because it is where we start to animate all the programs. The shop is open and now (with the help of the caterer’s supply chain and RiM’s other divisions like Products in Motion, Services in Motion and Boutique in Motion) we have to make the best products available and make sure people love it.”

The software part of his company’s solution is actually hardware agnostic and can be deployed on any wireless IFE server. As the core expertise of RiM lies in creating experiences and driving ancillary revenue to airlines, they view the 19kg server as an “enabler” for the entertainment/retail software platform. It is an option for airlines that don’t already have a streaming solution on board. Both the hardware and software components of this product have been developed in-house, in Dublin, by MiM, according to Blanchard.

Later this summer Sun Express, a joint venture between Turkish Airlines and Lufthansa, will be the first airline to launch the new service (MiM server included) on 39 Boeing 737 narrowbody aircraft. Passengers will be able to use their own devices to browse the web, watch films and TV shows, read magazines and newspapers, access practical information about their journey, communicate with crew and interact with the airline via social media.

Travelers will also have access to destination-specific content and offers such as hotel deals, rentals and tickets to attractions. The system is self-adapting; using route information and tracking passenger activity to “learn” which offers are most desirable to the passenger and when. 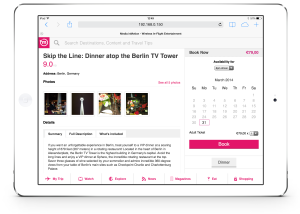 This screen shot illustrates the section of the MiM’s system where passengers can discover and book activities while en-route to a destination.

The fact that LSG Sky Chefs is involved in this venture points to the fact that industry consolidation is continuing at breakneck speed in the aviation world. And of course, it’s interesting to see that Lufthansa now has its hands in two solid wireless IFE solutions, including the Lufthansa Systems BoardConnect offering.

But LSG Sky Chefs is not the only large airline catering group eyeing such technology solutions as a means of developing competitive offerings to improve the passenger experience.

Simon de Montfort Walker, president and managing director of eGate Solutions (the retail solutions arm of the world’s next largest airline catering and cabin services supplier, gategroup), said this on the topic: “eGate Solutions has two different work streams here. One is partnering with a current hardware provider to augment current Wi-Fi/streaming solutions with additional retail and services information. The other is creating a secondary server onboard to manage above-the-wing services that would be integrated with other onboard passenger solutions (e.g., streaming solutions, WiFi or seat-back solutions).”

Big fish in a small pond or small fish in an ocean of sharks?