As inflight entertainment companies jockey to provide the best technical solutions for their airline customers, a battle is potentially brewing on the intellectual property front. Gogo and LiveTV have each submitted patent applications that could have an impact on the ability of the other to operate systems and services proposed or currently flying.

LiveTV’s application – US 13/654,916 – is currently pending. This application covers a system by which media content is stored in the aircraft for streaming to devices in-flight and whereby the decision to show the media to consumers or not is handled through communications with an authorization server on the ground. 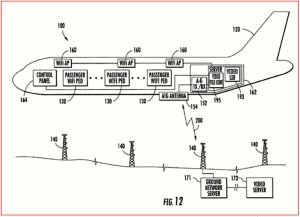 While the system architecture focuses on managing video authorizations and content updates while the planes are on the ground the proposed solution also allows for validation while the plane is in-flight.

And, despite the art showing the connection as what would typically be considered an ATG solution, LiveTV makes it clear that, “As appreciated by those skilled in the art, the satellite link may also be considered as an air-to-ground interface even though a satellite is involved.”

This is not a patent focused solely at Gogo.

With the Gogo Vision product making use of an onboard media server this patent (if granted) could potentially impact that service, assuming there is validation of the media validity happening in-flight. If the media is considered valid so long as it is loaded on the in-flight server then it may be a moot point. 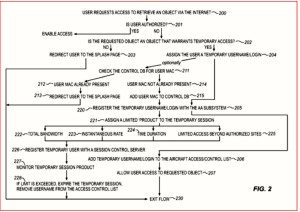 On the other side, we have patent application US 13/588,903 filed by Gogo. This application seeks to patent the concept of “providing temporary Internet access from a restricted local area network environment.” The company believes there “presently is no reliable, effective, cost-efficient way of delivering temporary captive portal Internet access to a selected Web site to only retrieve an application for use exclusively in the Restricted Local Area Network”.

Gogo wants to patent the means by which one would download an app to view onboard content while already on-board the aircraft but without granting access to other Internet-based resources along the way. The application was filed in August 2012, well after similar portals had been implemented on the ground. It will be interesting to see if moving such technologies on to an airplane is sufficient grounds to justify grant of a patent.

There have been some stories suggesting that LiveTV is looking to provide DirecTV as an app-based solution rather than via in-seat systems (and these stories grow more interesting as AT&T eyes a possible DirecTV buy, and Thales works to complete its acquisition of LiveTV).

Should LiveTV/Thales continue on the app path, passengers will want to be able to download the app during a flight. Should Gogo’s application be granted that could present a road block for LiveTV’s plans.

A series of IRDM announcements in the offing