Many folks reading this article can probably remember the launch of Virgin Atlantic and the unconventional marketing campaigns that helped to give the airline its ‘cool’ factor. Mood-lighting, cocktail bars in the ‘Upper Class’, and even ‘single mingle’ type events at 30,000 feet, encouraged a connectedness between passengers. This feeling of connection made guests feel connected to the airline, which in turn connected them to the Virgin brand. Virgin’s forward-thinking approach had turned flying with that airline into a status symbol, a token of ‘coolness’, and something that passengers were ready to brag about.

All that hoopla is ancient history, however, for the new generation of air traveler. In fact, consumers in the 18-24 year age group (representing about 8% of leisure travelers in the US annually) were born well after Virgin’s 1984 launch and were still taking naps when the Gulf war broke out in 1991. What makes an airline attractive to this group of people and how can airlines connect with them meaningfully to establish the kind of brand loyalty that will fill the jetliner seats of tomorrow?

Massimo Scialó, Professor in IT, Marketing and Communications, CEO of Beatpick (Australia) and Chairman and CEO Emergenza, gave a keynote address recently at the Hamburg Aviation Conference, held February 11-13 at the Movenpick Hotel in Hamburg. During his talk, he shared with the group of 200 or so high-level airline and airport delegates, a few truths that he’s learned about the habits of young leisure travelers from his many years in the concert/event promotion business. The critical means of reaching and persuading the young generation are constantly shifting and increasingly digital, he says, but one thing really hasn’t changed. They continue to be strongly motivated by a desire for connectedness and – above all – status amongst their peers.

This inherent desire for validation and ‘rank’, actually makes marketing to them easier than it may seem. Give them the means, says Scialó, and they will happily market your product to each other.

“Young people want to show off that they travel a lot,” he says, adding that for this younger age group, a flight or holiday is an event – just like a concert or festival. “So you should be providing them with the tools to do that, and each time you do that, they promote your product for free, in a more effective way than you could ever dream. They are telling their friends ‘I am doing this and I’m cool. Now it’s your turn to do it and I will show you the way’.”

Youth in general, tends to distrust authority and shy away from anything that is too mainstream or corporate in appearance (aka ‘The Man’), says Scialó. The way to break down these walls that teenagers are so adept at building, is to let them generate their own content that features your brand in a less obvious way, and share it with their social network. Facebook, he says, is absolutely invaluable. 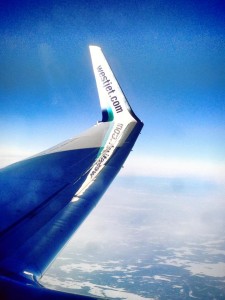 I’d opine that WestJet has got the right idea. Thousands of passengers take the ubiquitous ‘out the window, over the wing’ shot daily. Many will share it on social media. This picture is from my own Facebook newsfeed.

“Airlines,” Scialó said to the room. “How many of your passengers have Facebook? Maybe 80%? And how many are traveling with a smartphone? Where are your photo calls?”

A photo call, he explained to the assembly of puzzled-looking, middle-aged adults, is something we have all seen before at sporting events, movie premieres, or backstage at the Grammys. It is simple and quite inexpensive drop down screen (covered in branding and event logos) that celebrities or athletes stand in front of for press interviews or photos at an event. Airlines, says Scialó, should have these at the boarding gate on routes young people frequently fly for leisure; thus giving these passengers the opportunity to kill some time taking pictures, and then instantly promote both airline and destination by sharing those pictures on Facebook, twitter or Instagram. The passenger gets to show off, and the airline reaches several hundred people that it otherwise would not on that day. Everybody wins.

Other ideas that Scialó put to the conference attendees, would, if implemented, enable passengers to share even more.

Of course the commercial aviation business is a totally different ballgame than selling out clubs and promoting bands, but they do have one thing in common, the 15-25 year old demographic is an important target group. For airlines, winning the hearts and minds of these passengers today could garner lifelong loyalties and ensure their ticket sales tomorrow. Are they speaking the right language?

Massimo Scialó’s research into the behavior of young people who travel for leisure can be found on the Hamburg Aviation Conference website. See: http://www.hamburgaviationconference.com/resources/