The aviation industry has traditionally been, and continues to be, a rather male dominated field. A visitor to any of the industry’s major trade shows or conferences, for example the Paris and Farnborough Air Shows, or the Aircraft Interiors Expo in Germany, is likely to observe a significant imbalance between ‘skirts’ and ‘suits’.

FAA figures from 2010 showed that of the roughly 836,000 ‘non-pilot’ individuals working in the US aviation industry (mechanics, engineers, flight crew, instructors and so on), just 150,000 were women. This constituted a ratio on the weaker side of 1:4. In Europe this trend continues and becomes, if anything, even more disturbing in Germany. Here, in spite of being a model EU economy and home to one of the most advanced centres of aviation in the world (the city of Hamburg is home to Airbus, Lufthansa Technik and more than 300 specialist suppliers), there are a multitude of hurdles between women and successful careers in aviation.

Another troubling figure? According to Eurostat figures from 2012, the average wage gap between male and female workers in Germany, at 22.4%, is the second widest in the EU (Estonia is first) and is on the rise.

Hamburg Aviation WoMen is a new and very much needed faction of Hamburg Aviation, (Luftfahrtcluster Metropolregion Hamburg e.V) a growing ‘cluster’ of aviation-related companies, research institutions, educational institutions and the city of Hamburg itself, with a common goal of promoting the local aviation industry.

Aiming to abolish female stereotypes in the workplace, fight against wage discrepancies, educate about diversity in corporate culture, increase female participation in planning groups and committees, establish mentorship opportunities and reach out to female students and similar groups, Hamburg Aviation WoMen has plenty to keep its executive committee and members busy. 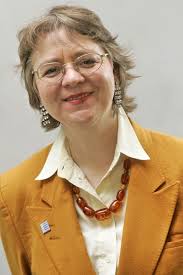 Prof. Dr. Monika Bessenrodt-Weberpals, pictured to the right, is a Professor of Physics and Gender and Faculty of the Media Technology Department at HAW Hamburg (University of Applied Sciences). She is also to be credited with much of the work and thought behind the formation of Hamburg Aviation WoMen. “We want to push diversity, and the word we have chosen for this is ‘Schub’,” she explained. “Schub is the German word for thrust. When we look at a plane taking off against resistance, we are inspired by this.”

According to Dr. Bessenrodt-Weberpals, the first official meeting of Hamburg Aviation WoMen took place in April 2013. Having since defined its vision and strategic goals, the group has sketched out primary steps. Moreover, the organization is currently working to accumulate members and momentum through marketing.

So far, support has been strong and there have been several additional planning sessions, as well as annual afternoon lectures featuring prominent women speakers. These are typically followed by an ‘intense world café’ and an informal dinner for networking. Many of the sessions and dinners have been booked to capacity within days of announcement, highlighting just how enthusiastic the response to this initiative has been.

One of the first goals of Hamburg Aviation WoMen is to reach a target of 30% female representation each of the various planning and committee groups that comprise the Hamburg Aviation Cluster. “I take this number from the general rule of innovation,” says Dr. Bessenrodt-Weberpals. “It takes a minimum of 30% diversity to change the culture of any given field. Within aviation, we women must change our minority position into one where we are so many that we cannot be overlooked any longer.”

With this achieved, there is no telling what the extent of the group’s influence could be on Northern Germany’s aviation sector. One thing, however, is quite evident – any change in the current atmosphere would be music to the ears of many.

Beate Lau, member of Hamburg Aviation WoMen, is the only woman in her entire company. She is the Manager of Lühr Modell und Formenbau GmbH, which operates in the aviation and automotive fields and specializes in creating 1:1 models (mock-ups), moulds and tooling. According to Lau, discrimination is not the reason why she is the lone female in her firm, working alongside 29 male colleagues. She thinks that more work needs to be done to attract young women into smaller firms in the field of aviation and similar industries. The women are just not there.

“Where are the women?” she wants to know. “I am currently looking for a new engineer. I would like very much to hire a woman. I have spoken to other companies like ours and they have very few women as well. I hope that through Hamburg Aviation WoMen, we can attract more women into our industry. They can learn from our experience, and in turn everyone will benefit.”

Women of Boeing to be celebrated